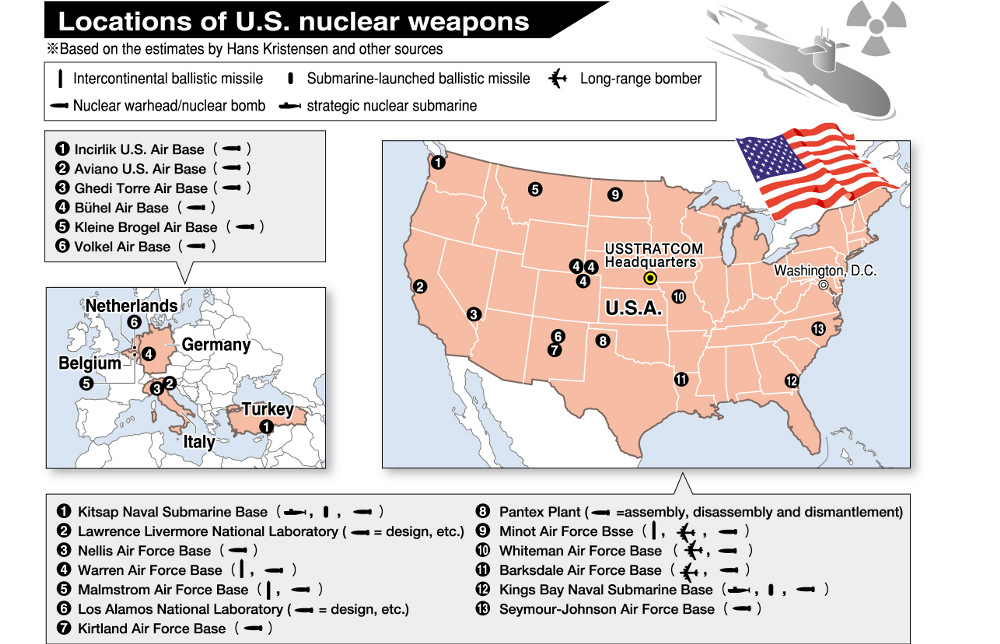 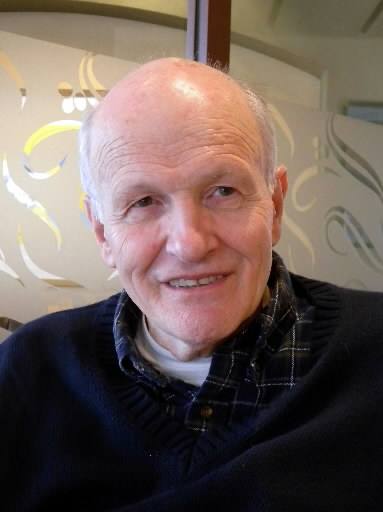 Special Series: The Day the Nuclear Umbrella is Folded
Part 2: Reviewing the Cold War structure of the U.S. nuclear arsenal

Two decades after the end of the Cold War, a substantial number of nuclear missiles in the U.S. arsenal still target Russia. The Nuclear Posture Review (NPR) will be issued by the end of this year to provide a basis for President Barack Obama's nuclear policies, but will it dramatically change the persisting Cold War structure? At the same time, the A-bombed nation of Japan, despite calling for the abolition of nuclear weapons, has expressed its concern that U.S. nuclear disarmament may undermine the "nuclear umbrella." It goes without saying that this stance is antithetical to the growing international momentum for the abolition of nuclear weapons. In this report, we look at the actual situation of the nuclear umbrella, on which Japan relies, by examining the current status of U.S. nuclear forces.

On November 24, a meeting on disarmament-related issues was held in Tokyo. Gregory Kulacki, 52, an expert on security issues and a member of the Union of Concerned Scientists (UCS), an NGO in the United States, expressed a dim view of the situation when addressing about ten other participants from peace organizations.

Mr. Kulacki was pessimistic about the outlook of the forthcoming NPR under the Obama administration. He said that although President Obama stated in Prague that he would reduce the role of nuclear weapons, it is unlikely this will be put into action. He also said that the "diplomatic pressure" exerted by former Prime Minister Taro Aso before Yukio Hatoyama took office is one of the obstacles. "I hear that the U.S. met with strong resistance, almost intimidation, from Japan against the withdrawal of Tomahawk cruise missiles," Mr. Kulacki said.

Tomahawk missiles are submarine-launched tactical nuclear weapons. In 1992, after the Cold War ended, President George Bush (Senior) withdrew a number of tactical nuclear weapons. Tomahawk missiles, too, have been deactivated and kept at the U.S. navy bases at Kitsap and Kings Bay. These missiles were to be disposed of when their service life expires in 2013, but the Japanese embassy in the United States reportedly pressured the U.S. Congressional Commission on the Strategic Posture, which was established to examine the NPR, arguing that the elimination of these missiles would weaken the nuclear umbrella.

The current status of U.S. nuclear forces, on which Japan depends for its security, is as follows: The United States has 9,400 long-range strategic nuclear weapons, of which roughly 2,200 are actually deployed. Hans Kristensen, 48, of the Federation of American Scientists (FAS), analyses that, despite the decreasing number of weapons, the assumption that the weapons are deployed for use in actual warfare has not changed.

Based on the NPR, the Presidential Directive and other information, the U.S. Strategic Command in Omaha, Nebraska has put forward various scenarios of possible nuclear wars. The Strategic Command has also compiled a list of military facilities of "enemies," selected as targets of nuclear attacks.

Targets in Russia and China

The list of targets is kept top-secret. Mr. Kristensen estimates that the current list includes about 2,500 targets, among which 1,600 are in Russia, 600 in China and the remaining 300 in North Korea and Iran.

Some argue that these scenarios of nuclear war have not been discarded because Russian nuclear weapons also remain on alert, as Russia, too, gives greater importance to nuclear forces than conventional forces. The strong resistance to nuclear disarmament from conservative groups and military industries is pointed to as another reason why the old mentality still prevails.

The forthcoming NPR will be the third nuclear posture review issued by the United States, following the Clinton and Bush administration NPRs conducted respectively in 1994 and 2002. Will the revised NPR be able to significantly alter the Cold War mentality and structure that adheres to the war scenarios?

As to this matter too, Japan's previous administration, concerned about the biological and chemical weapons of North Korea, is said to have pressured the United States not to limit the scope of deterrence to nuclear weapons.

Mr. Kristensen contends that Japan is overly focused on nuclear weapons. He says that nuclear weapons are only a part of deterrence and that deterrence also includes the presence of U.S. aircraft carriers, diplomacy and economic relations.

At the press conference of November 24, Foreign Minister Katsuya Okada clearly stated that he will investigate the former administration's diplomatic pressure in relation to Tomahawk missiles.

We interviewed Frank von Hippel, 71, a professor at Princeton University and a leading nuclear physicist who worked for the Clinton administration as an expert on nuclear disarmament and non-proliferation. We asked him about the role of nuclear weapons in the security policy of the United States.

Below are Professor Hippel's profile and comments:

Professor Frank von Hippel
Professor Hippel was born in the United States in 1937. He obtained a PhD in physics from Oxford University. He was Assistant Director for National Security in the White House Office of Science and Technology Policy in 1993-94 during the Clinton administration.

Where are North Korea's missiles located? Are there plans to actually launch these missiles? Do the missiles carry conventional weapons or nuclear weapons? It is very difficult to find accurate answers to these questions.

Furthermore, the overwhelming conventional forces of the United States can counter the North Korean threat. Even a single nuclear weapon can kill an enormous number of people. Hasty use of such weapons is criminal and cannot be a practical option.

In Russia, about a thousand missiles tipped with nuclear warheads are still kept on hair-trigger alert. Although the situation has improved compared with the immediate aftermath of the collapse of the Soviet Union, Russian control over nuclear weapons is not without problems. There remains a risk that if Russia mistakes some incident for a nuclear attack by the United States, it may launch nuclear missiles to counterattack, which would result in an accidental nuclear war. Therefore the best defense is the global elimination of nuclear weapons.

In fact, the United States can limit the role of nuclear weapons to the deterrence of their use by other nations. This is already being discussed, but the Japanese Ministry of Foreign Affairs and Ministry of Defense have been lobbying to maintain the option of using nuclear weapons to counter the biological and chemical weapons held by North Korea. They also argue that U.S. nuclear weapons could be used against China's conventional arms. We must recognize the fact that those involved in the nuclear strategy of the Obama administration are strongly influenced by these voices emanating from Japan.

As a first step to get out from under the U.S. nuclear umbrella, thorough discussions should be held on what are the possible threats to Japan and whether or not U.S. nuclear forces are the only means for countering these threats.

Forming a Japanese Congressional Commission on the Strategic Posture may help, too. The commission, however, must not become a conclave of a few government officials who simply swallow the comments of some worshippers of nuclear deterrence within the U.S. Department of Defense.

U.S. nuclear arsenal
The United States holds an arsenal of about 2,200 strategic nuclear warheads, including those on intercontinental ballistic missiles (ICBMs) and submarine-launched ballistic missiles (SLBMs) as well as those carried by strategic bombers. A multiple-warhead missile can hit several targets at the same time. Therefore, generally speaking, the number of warheads exceeds the number of delivery vehicles.

According to some sources, 450 ICBMs are deployed in underground silos at different bases. The total number of warheads on these missiles is said to be about 550.

As for SLBMs, there are 14 strategic nuclear submarines, carrying 288 Trident D5 missiles. The number of warheads is estimated to be 1,152. Eight of these submarines are based at their home port along the state of Washington on the West Coast and are continuously on patrol in the Pacific Ocean, armed with nuclear weapons.

There are two types of strategic bombers, the B-52 and the B-2. In total, about 60 strategic bombers are said to be deployed for vigilance and for offensive purposes. The number of warheads is about 500, including warheads on cruise missiles as well as nuclear bombs. B-52 bombers are deployed at Andersen Air Force Base in Guam in rotation from bases on the U.S. mainland.

As for shorter-range tactical nuclear weapons, B61 nuclear bombs are deployed at U.S. bases in Europe. Tomahawk submarine-launched missiles have been withdrawn from the front line and stored on the U.S. mainland since 1992.