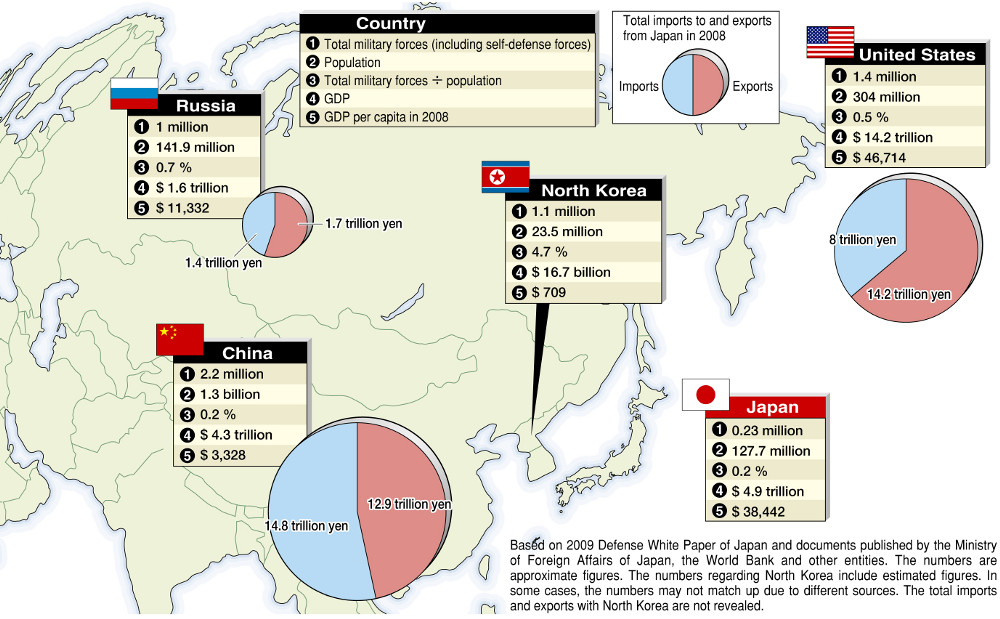 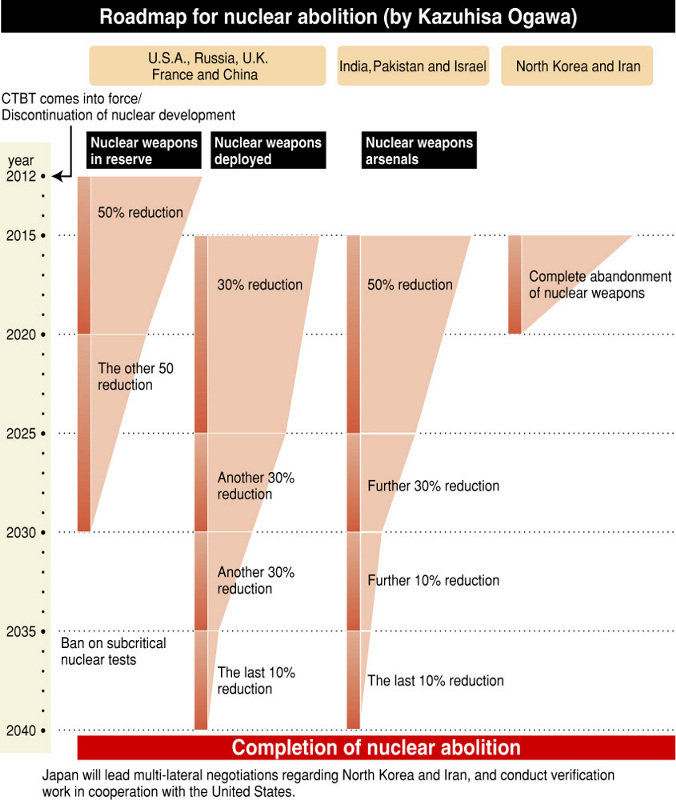 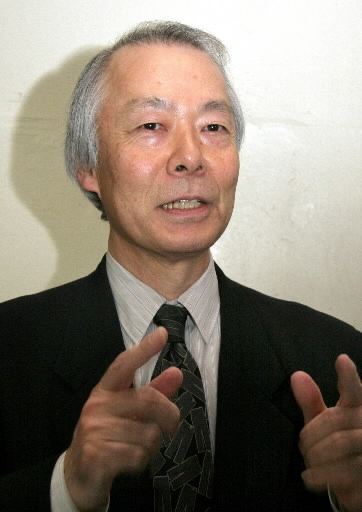 Special Series: The Day the Nuclear Umbrella is Folded
Part 3: Trust forms the foundation of security

The U.S. "nuclear umbrella" covers Japan. But what nations or threats supposedly constitute the need for this protection?

Separated by the Sea of Japan, Japan faces the nuclear powers of China and Russia. In addition, there is North Korea, which has conducted two nuclear tests and once launched a missile that flew over Japan and fell into the Pacific Ocean.

How great, though, is the possibility that these countries would attack Japan? Although this possibility cannot be completely ruled out, hasn't the potential threat been overstated? In this time of multi-national cooperation, wouldn't it be wiser to pursue measures that could remove the threat in the first place?

At an international symposium held on November 18 in Tokyo by the National Institute for Defense Studies (NIDS), Yury Fedrov, who has served as professor at the Moscow State Institute of International Relations, among other posts, pronounced, "Can Russia support U.S. President Barack Obama's idea of a world free of nuclear weapons? The answer is 'No.'"

Elaine Bunn, a senior fellow at the National Defense University's Institute for National Strategic Studies of the United States, was sitting next to Dr. Fedrov. Asked by the moderator to comment, she said briefly, "I am very much concerned about certain developments in Russia."

There are reasonable grounds for such concerns. On October 14, an interview with Nikolai Patrushev, secretary of the Security Council of the Russian Federation, appeared in a Russian newspaper, the Izvestia. Secretary Patrushev revealed that the new military doctrine, to be compiled by the Kremlin by the end of the year, will include such clauses as "The use of nuclear weapons in a preventive manner is not foreclosed."

The new doctrine is believed to reflect Russia's current military conditions. Russia relies more heavily on nuclear weapons than does the United States. The doctrine is also interpreted as political intimidation in view of Russia's domestic conflicts, such as the Chechen war. Is Russia, then, a threat to Japan?

Shinji Hyodo, a senior fellow at NIDS, has analyzed Secretary Patrushev's statement and points out that, in terms of security, Russia is eyeing the nations which share its borders and is seeking to bolster the limitations of its conventional military force with a nuclear capability. "It's clear that Russia has become a less significant threat to Japan than it was at the time of the Cold War," he said. "Still, we must continue to monitor the situation closely in order to identify any changes to Russia's posture."

Still, few experts would predict a Russian attack on Japan in the near future.

What about China? As the country's economy develops, its strength as a military power has also grown and the quiet military buildup has raised concern and resentment among China's neighbors.

Xia Liping, dean and professor at the School of Political Science & International Relations at Tongji University in Shanghai, attended the same international symposium. "If conflict were to break out between China and Japan," he said, "two potential causes might be the issue of territorial rights in the East China Sea and the issue of Taiwan." At the same time, he believes that both countries will stress their partnership. "China is Japan's primary trading partner," he explained. "The possibility of conflict is small and there are areas in which both nations can build new cooperative relations, such as tackling environmental problems."

Gregory Kulacki of the Union of Concerned Scientists, a private American entity, has analyzed the situation and he comments, "China's budget for nuclear weapons is limited and the country does not possess an early-warning satellite. So it isn't capable of detecting signs of other nations' use of nuclear weapons and preempting attacks." Dr. Kulacki, who is based both in the United States and China, challenged the significance of the nuclear umbrella, saying, "China believes that nuclear weapons have only a psychological impact and that the U.S. will not launch a nuclear strike unless first attacked. Therefore, those weapons do not exert much pressure on China."

Meanwhile, North Korea has been pushing ahead with its own nuclear weapons program. While refusing to rejoin the six-party talks, the nation has decided to accept U.S. special representative Stephen Bosworth's visit scheduled for December 8. Such actions have revealed a stance that is still unsettled.

If North Korea has developed nuclear warheads that are small enough to be carried on missiles, nations within their range will naturally find this intimidating. But many experts believe that conventional military force would be enough to deter North Korea. One such expert, military analyst Kazuhisa Ogawa, suggests that Japan should lead the nuclear abolition movement and earn the confidence of other nations in order to lay a new foundation for security.

Interview with Kazuhisa Ogawa, military analyst: Does Japan have enemies?

Do North Korea, China and Russia pose threats to Japan? The Chugoku Shimbun spoke with Kazuhisa Ogawa, a military analyst, on this subject. Below are Mr. Ogawa's profile and his comments.

Kazuhisa Ogawa
Kazuhisa Ogawa was born in Kumamoto Prefecture in 1945. He was schooled in the education system of the Japanese Ground Self-Defense Force (JGSDF) and completed the JGSDF Aviation School. After leaving Doshisha School of Theology, he worked as a reporter for a weekly magazine. He became an independent military analyst in 1984.

About three years ago, at the request of the Japanese government, I reported the possibility that North Korea holds about ten nuclear weapons. Nevertheless, this doesn't pose a significant threat to Japan. The Japan-U.S. alliance is strong enough to serve as a deterrent.

For North Korea, nuclear development has functioned as a bargaining tool, and ballistic missile technology has provided income to the nation through exports to Iran and other countries. But its nuclear tests and missile launches are simply tactics to press for bilateral talks with the United States. North Korea's ultimate goal is maintaining the "Kim Dynasty." It is fully aware that if it should attack Japan, it would be annihilated by a U.S. counterattack.

One source of anxiety is the possibility that the regime could collapse for some reason, and ballistic missiles would be launched in the chaos. Unlike Germany, South Korea and North Korea have experienced a war waged within the same ethnic group. The vicious circle of attack and retaliation could lead to a civil war. In such a scenario, there would be an influx of refugees into China. This is why China has assumed the role of chairperson in the six-party talks, so that the North Korean regime will be preserved.

Providing support is effective in the democratization of China

Although China's military budget has shown double-digit increases for 21 straight years, the armed forces of the U.S. and Japan have been modernized during the same period of time. No problem exists as long as the gap in capability has not narrowed. We should not get carried away by the notion that China poses a threat to Japan.

A threat arises when one party has both the capability and the intent to inflict harm. To maintain our security, we must keep the other party's capability and intent from becoming hostile. We can see clues in this from the U.S. policy of "constructive engagement" toward China. By providing support to China's modernization and democratization, we can build relations mainly in the economic sphere so no sense of hostility will surface.

The People's Liberation Army of China and the Self-Defense Forces of Japan have continued to hold quasi-official exchanges for confidence building since 2000, and members of the Army have visited Hiroshima Peace Memorial Museum. Maintaining relations of trust between the military organizations is also crucial for peace.

Though Russia has made it clear that it considers the use of weapons of mass destruction and nuclear weapons an option in combating terrorism, its current relations with the U.S. are stable enough for the two nations to conduct joint military exercises. For Japan, which is America's most important ally, Russia poses little threat.

I believe, with Japan's leadership, the elimination of nuclear weapons is an attainable goal for the future. In October, I presented a roadmap toward the elimination of nuclear weapons to senior officials of the Ministry of Foreign Affairs. This roadmap includes the paths which should be taken respectively by the developed nations in the nuclear field [five nations including the U.S. and Russia], the medium-developed nations [such as India and Pakistan], and the developing nations [North Korean and Iran].

But before that, Japan should make its true colors clear in seeking to establish peace. Taking advantage of this opportunity of the change in administrations, why not declare that Japan shall pursue foreign and national security policies to realize the spirit of the preamble of the Constitution, which advocates actions to realize peace?

While sustaining a strong Japan-U.S. alliance, we should proudly declare that the Self-Defense Forces will not have a power projection capability and that Japan will lead the movement for the abolition of nuclear weapons, including U.S. nuclear arms. Trust and recognition from the international community should be the foundation of Japan's security and prosperity.