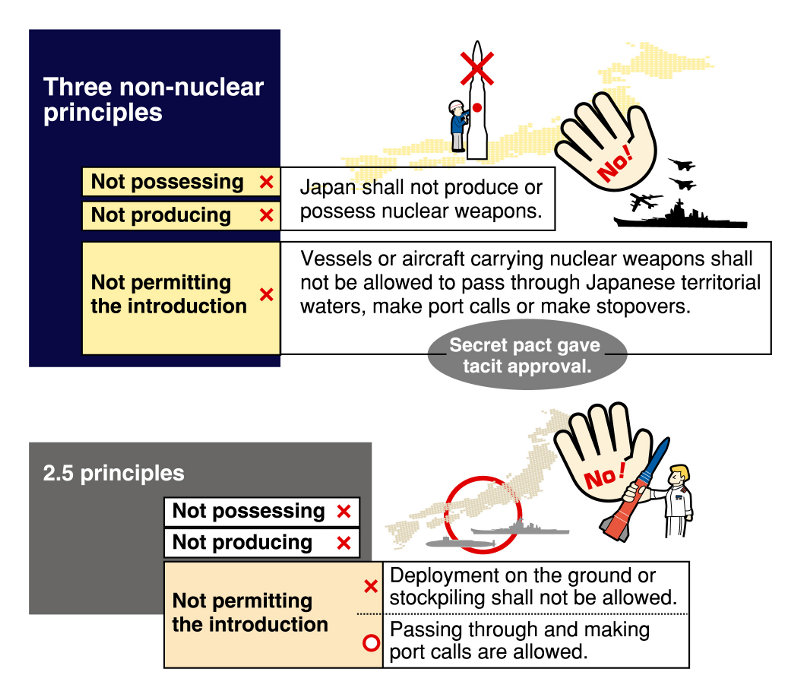 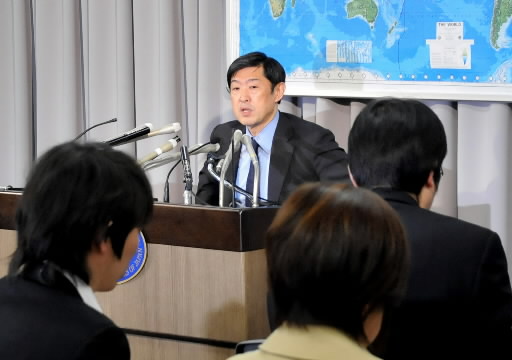 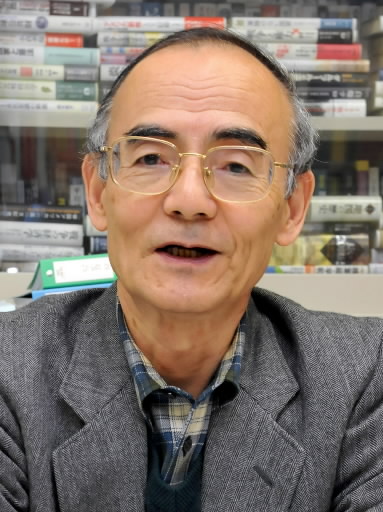 The three non-nuclear principles--not possessing, not producing and not allowing the introduction of nuclear weapons into Japanese territory--have been a national credo of the A-bombed nation, Japan. In the speech he made at the United Nations in September, Prime Minister Yukio Hatoyama vowed to uphold these principles.

A former vice foreign minister, however, has admitted to the existence of a "secret pact" with the United States in regard to "the introduction of nuclear weapons." It is suspected that, under the secret agreements, Tokyo gave tacit approval for port calls and the passage of U.S. military vessels carrying nuclear weapons. If this proves true, it means that the Japanese government sustained a deception of the people while publicly advocating the three non-nuclear principles. This would greatly undermine the national credo and the credibility of Japanese diplomacy.

We must once again recognize the significance of the three non-nuclear principles and pledge, not only in Japan but also to the world, that we will firmly adhere to these principles. This will be the first step toward moving out from under the nuclear umbrella.

A panel of six experts met for the first time on November 27 to investigate the secret pacts between Japan and the United States. The chairman of the panel, Professor Shinichi Kitaoka of Tokyo University told the press that many diplomatic experts view such agreements as highly unusual and that the panel will submit a report on the results of its investigation around the middle of January.

The secret pact is said to have been made between Japan and the United States in 1960, when the Japan-U.S. Security Treaty was renewed. Past administrations led by the Liberal Democratic Party (LDP) repeatedly denied the existence of such agreements. Immediately after the recent change of government, Foreign Minister Katsuya Okada ordered the Ministry of Foreign Affairs to investigate this issue, and evidence that proves the existence of four related pacts has reportedly been found in more than 3,000 internal documents.

After the first meeting of the experts' panel to investigate the matter, Foreign Minister Okada commented, carefully choosing his words, "First we must uncover the truth of the existence of the secret pacts and then decide what to do based on our findings."

On the other hand, U.S. documents and other information have revealed the fact that the former LDP administration was seeking this past spring to prevent the retirement of Tomahawk cruise missiles stored on the U.S. mainland. The short-range tactical Tomahawk missiles can be carried by nuclear-powered attack submarines, which have entered Japanese ports.

Requesting Tomahawk missiles to be kept in service is the same as soliciting the entry of U.S. nuclear weapons into Japan.

"If Japan allows nuclear weapons into its territory, the nation will become a base from which the United States can launch nuclear attacks. Does Japan want to assume that role?" says Shoji Niihara. As a Tokyo-based expert on diplomatic history, he has been investigating the secret pacts on his own by studying declassified U.S. documents. He questions why Japan, which upholds the three non-nuclear principles as a national credo, clings to the "nuclear umbrella."

Criticizing Japan's two-faced stance, Mr. Niihara says, "Japan will never be trusted by the international community if it maintains such a policy." If Mr. Hatoyama truly wishes to pursue a world without nuclear weapons, argues Mr. Niihara, the Hatoyama administration must renounce the secret pacts and reaffirm the three non-nuclear principles.

Making the most of the three non-nuclear principles
An interview with Hideki Kan, Professor at Seinan Jogakuin University

The Chugoku Shimbun spoke with Hideki Kan, a professor at Seinan Jogakuin University in Kitakyushu, Fukuoka Prefecture, on how to make the most of the three non-nuclear principles. Below are Professor Kan's profile and his thoughts.

Hideki Kan
Hideki Kan was born in Kumamoto Prefecture in 1942. He graduated from the University of Oregon in the United States. After obtaining a doctorate in judicial science at Hitotsubashi University, he has held several posts including professor at Kyushu University. He assumed his present position at Seinan Jo Gakuin University in 2005. Doctor Kan specializes in international politics and is an expert on the history of diplomacy between the U.S. and Japan.

Japan's security policy has been dependent on the "nuclear umbrella" and is based on promises made between political leaders of the United States and Japan. Japan has no choice but to believe that the U.S. will protect us with its nuclear weapons. Such a policy lacks the proper stability on which to entrust the citizen's lives and property.

We should instead adhere to the three non-nuclear principles and adopt diplomatic policies that will promote peace and stability in Asia. These policies should be aimed at providing security without relying on the nuclear umbrella. To demonstrate the strength of our commitment to anti-nuclear policies, we should enshrine the three principles into law, which would boost international trust in Japan as the only nation to have experienced nuclear attack. It would also make it easier for Japan to take a leadership role in the international community, eventually leading to future developments which will not be realized if we continue clinging to nuclear deterrence as a defense against other nations.

Revision of the three principles is unnecessary

While the probe is being conducted into the secret pacts, some people have voiced the opinion that the three non-nuclear principles should be eased to the "two and a half non-nuclear principles." But U.S. nuclear weapons capability has changed considerably since the end of World War II. At present, its main weapons are intercontinental ballistic missiles and strategic submarine-launched ballistic missiles. The U.S. has drawn up a strategy in which enough nuclear capability is maintained as deterrence against China and North Korea without having to make stopovers at Japanese ports.

On the other hand, the administration of Prime Minister Yukio Hatoyama has been advocating the denuclearization of Northeast Asia and the elimination of nuclear weapons. If it aims to realize what it upholds, there is no need to revise the three principles. The government only has to convey the message that the secret pacts were a remnant of the former administration and the new administration will not preserve them.

Dependency on nuclear forces will only increase risk

The United States seeks hegemony. So, if Japan adheres to the three non-nuclear principles, relations between the two countries might temporarily grow thorny. However, apart from nuclear weapons, there are many other aspects to the U.S.-Japan relationship. It is unlikely that mutually-beneficial bonds across a broad range of fields, including economic and cultural exchange, would collapse.

It isn't realistic to think that China or North Korea would use nuclear weapons against Japan. If Japan should show unnecessary distrust or wariness against them and abolish its three non-nuclear principles, it will only increase the risk of being attacked with nuclear weapons, inciting a vicious circle.

I would argue that a realistic way of handling security issues includes the goal of removing tensions among Asian nations. Japan, while protected under the U.S. nuclear umbrella, is a threat in the eyes of North Korea. In this situation, however enthusiastically Japan may appeal for nuclear abolition, Japan cannot win trust.

It is not until we engage in diplomatic dialogues that the denuclearization of Northeast Asia can become a real possibility. Now that the three non-nuclear principles are receiving greater attention, the public should deepen the debate over Japan's path into the future.

National policy
The national policy is a nation's basic policy supported by the public. It is not legally binding. The three non-nuclear principles were deemed a national policy in a parliamentary resolution in 1971. Amendments to the policy need to be approved by the Diet.

Secret pacts and the current probe
The alleged secret pacts include one agreement which allows the entry into Japan and/or crossing of Japanese waters of nuclear-armed U.S. battleships and airplanes without prior consultation, despite the Japan-U.S. Security Treaty stipulating that Washington is required to consult with Tokyo before introducing nuclear weapons into Japanese territory. This secret agreement was allegedly made between the two nations in 1960.

Immediately after taking office, Foreign Minister Katsuya Okada ordered the probe into the following four secret pacts:
1. Stopovers in Japan by U.S. vessels carrying nuclear weapons, an agreement made at the time of the 1960 revision of the Japan-U.S. Security Treaty
2. U.S. combat operations in a military contingency on the Korean Peninsula
3. Nuclear weapons to be brought into Okinawa in the event of an emergency, following the return of Okinawa to Japan in 1972
4. Assuming the costs involved in restoring the lands used by the U.S. military to their original condition after the reversion of Okinawa

A panel of experts will examine the findings of the Ministry's in-house investigation, and will submit a report to the Minister by the middle of January 2010.