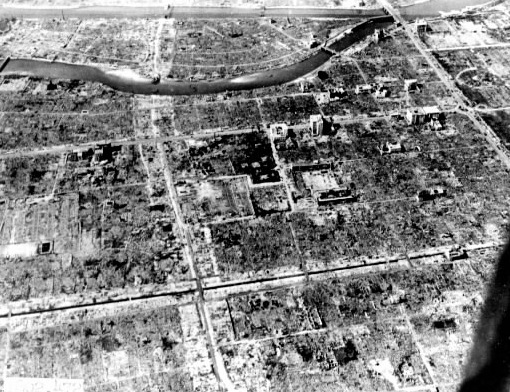 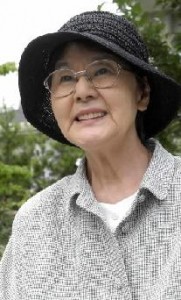 In the summer of 2003, the Hiroshima Peace and Culture Foundation obtained 226 photographs from the U.S. National Archives which show the devastation caused by the atomic bombing. The photos the American forces took in their investigation of the effects of the bombing are witnesses that convey the tragedy of that time. This series [originally published in July and August 2003] traces the reality of the atomic bombing through some of these images.

The lonely taste of her mother

This photograph shows downtown Hiroshima from the east, in the aftermath of the atomic bombing. This angle has not yet been seen in other images that have been made public. The Atomic Bomb Dome is at the top right. Stretching vertically through the center is the 100-meter-wide fire lane that later become Peace Memorial Boulevard. The old Hirataya River runs horizontally and crosses the fire lane. Now filled in, the former river area accommodates Namiki-dori Street and other spots popular with young people. At this site was also born one of the representative A-bomb poems, "Sky of Hiroshima." The poet dug up the remains of her mother and younger brother here, and saw her father pass away soon after.

"Sky of Hiroshima" is included in many anthologies of A-bomb poems. Actress Sayuri Yoshinaga recited the poem on a CD entitled "The Second Movement" and this CD sold 300,000 copies. The poem first appeared in December 1950 under the pen name "Yukiko Hayashi" while Japan was still occupied by the Allied Powers.

"In those days, if you criticized the bombing, you would be labeled anti-American or a Communist. When I was asked by Mr. Toge to write a poem, I used that pseudonym so my brother and others wouldn't know that I was the author."

Sachiko Kawamura, 74--Kajitani was her maiden name--lowered her voice as if confiding a secret. She now lives alone in Tokyo and has four children and six grandchildren. "What I described in the poem is still too painful to tell my family. So I have gone on with my life, just trying to forget." In the corner of a café located in the bustle of a railroad station, she spoke more quietly still.

She met Sankichi Toge, the poet, several times at church and other places. He died in 1953 at the age of 36. His kind nature appealed to her and she showed him an untitled poem she had written in one sitting on the wrapping paper for a cake box. Mr. Toge decided to publish it in an anthology that he was editing called "Our Poems." He also included Ms. Kawamura's poem in "From Beneath the A-bomb Cloud," another book he compiled two years later with Tomoe Yamashiro.

"Sky of Hiroshima" begins the day after the atomic bombing.

That night I slept in the open
The next morning, I finally made it to the shelter
But only my father was there
Mommy and Yu-chan died…

Ms. Kawamura was 16 years old at the time, and attending Yamanaka Girls' High School (today's Fukuyama High School, affiliated to Hiroshima University). She was exposed to the atomic bomb at a factory in Nishi Ward, her assigned workplace. Her father Soichi, then 53, was a dentist. The family of four lived in Tanaka-machi, Naka Ward, but their house was included in the dismantling project to create a fire lane so they moved to Shimo-Nagarekawa, Naka Ward. Her father thought that the new house, further away from the weapons depot, although closer to downtown, would be less likely to suffer in the event of an air raid.

However, the atomic bomb devoured the whole delta area. Her mother Shizu, then 46, and younger brother Yuichi, then 13, were trapped under the fallen house and consumed by the flames. Soichi alone crawled out. Two days later, the father and daughter dug through the scorched ground with a hoe in search of their loved ones.

Daddy squats down, and digs with his hands
Suddenly, his voice weak with exhaustion, he points
I throw the hoe aside
And dig at the spot with my hands
The tiles have grown warm in the sun
And we dig
With a grim and quiet intent

Oh...
Mommy's bone
Oh...
When I squeezed it
White powder danced in the wind
Mommy’s bone
When I put it in my mouth
Tasted lonely
The unbearable sorrow
Began to rise in my father and I
Left alone
Screaming, and picking up bones
And putting them into the candy box
Where they made a rustle

"I was so desperately sad," Ms. Kawamura recalled. "I put her bone in my mouth, wishing I could be with her. My father blamed himself…" Purple spots then broke out on his body, a symptom of acute radiation sickness, and spread. He died on September 1.

In her poem, Ms. Kawamura depicted her father's last breaths, but in reality, she wasn't by his side at that moment. She was on her way to an army facility, where another brother had been stationed, to tell him that their father had taken a sudden turn for the worse.

After "Sky of Hiroshima" was published, she was buffeted by the postwar chaos. In retrospect, the peace movement itself was in disarray. She quit writing poetry and moved to Tokyo. After getting married, her health suffered from the aftereffects of the bombing. This is why she said: "I have gone on with my life, just trying to forget."

With wars and conflicts continuing in many parts of the world, Ms. Kawamura is stirred by the desire to write more about her experience of the atomic bombing, which she has not fully described in her poems.

"If the survivors remain silent," she said, "those lacking in imagination may use nuclear weapons again." In a determined tone, she added, "Only after I've finished writing about that day do I want to die."