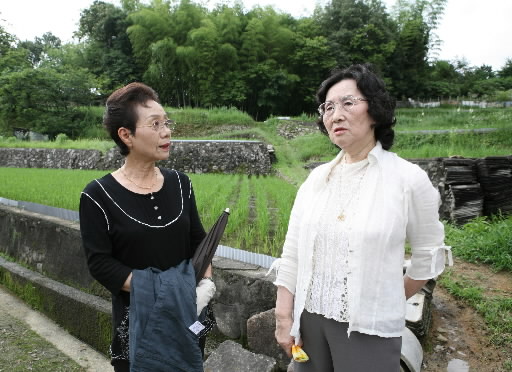 A difference of meters spells no relief measures

Narrow, sloping roads run in all directions, weaving between houses and fields of rice and other crops. The Kamiyasu district in Asaminami Ward, Hiroshima, is located about ten kilometers north from the hypocenter of the atomic bombing. A hill covered with leafy trees marks the boundary between the Kamiyasu district and the Takatori district, the former's western neighbor.

"As there were not so many trees before, the view overlooked Takatori," said Sadako Sori, 71. She still lives nearby and, along with her childhood friend Eiko Kaminishi, 71, a resident of Yagi, Asaminami Ward, longs for the same sight from her past. Ms. Sori continued, "The government says that the heavy rain fell beyond the hill and it rained only slightly on this side. But was that really possible?"

In 1976, the government designated Chorakuji and Takatori, which were in western Yasu village (now, Asaminami Ward) at the time of the bombing, as part of the "Health Examination Special Designated Area" (the heavy rain area of the black rain). Meanwhile, the Kamiyasu and Aita districts, on the eastern side of Yasu village, were designated as part of the light rain area. According to the current system, no relief measures are provided for those exposed to the black rain outside the heavy rain area. The residents set up the "Black Rain Association for Kamiyasu and Aita Districts" eight years ago and have been seeking to expand the designated area.

However, no progress has been made. Norio Seiki, 70, chair of the association and a resident of Aita, revealed his feelings of dissatisfaction, saying, "Heavy black rain fell in Kamiyasu and Aita, too, and that fact should not be misrepresented."

At the time of the bombing, Ms. Sori was a first grader at Yasu Elementary School. On her way home from school with Ms. Kaminishi, they were exposed to the black rain: "All of a sudden, the sky grew dark and the rain began to pour down." They hurried into a nearby shed to escape the rain. Ms. Kaminishi noted that their faces and their white blouses "were stained black, as if we poured mud over ourselves."

Though Ms. Sori, at the time, did not suffer acute symptoms, such as hair loss and diarrhea, she has been afflicted with anemia and high blood pressure since her mid-40s and developed a myoma of the uterus at the age of 48. In addition, she underwent an operation for colon cancer at the age of 58, learning then that those exposed to the black rain were also able to obtain the Atomic Bomb Survivor's Certificate. But when she consulted with the ward office, Ms. Sori discovered that those exposed to the black rain in the light rain area were not eligible to receive the certificate.

Ms. Sori's home at the time of the bombing was just a stone's throw from Takatori. "Why is there a difference?" she said. Since the establishment of the Black Rain Association, Ms. Sori has played a central role in its activities. However, she was unable to hide signs of exhaustion due to the government's firm stance of not agreeing to expand the designated area.

The groans of A-bomb survivors at Yasu Elementary School, where she was taken after the blast, still ring in her ears. "It's true, I'm happy just to be alive," Ms. Sori said. "But I'm afraid I may fall ill again." She has continued to receive treatment for emphysema, which was detected in December of last year. Her concern over the effects of the black rain has mounted.