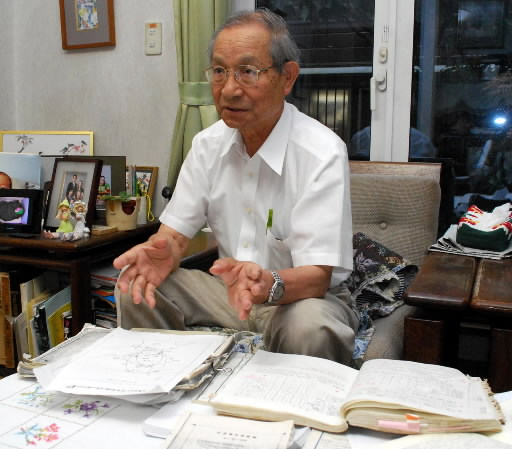 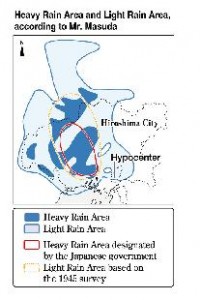 Rainfall claimed to be four times the official size

In the two notebooks, Yoshinobu Masuda, 86, a Tokyo resident and the former director-general of the Meteorological Research Institute, made meticulous notations, district by district, area by area, on the black rainfall that he studied through his own survey. "My survey was exhaustive so that my study would be capable of meeting any criticism in the years to come," Mr. Masuda said, reflecting on the past quarter of a century.

The impetus for his survey occurred in 1985. "Does rain fall in areas with such a tidy shape?" an A-bomb survivor, who had experienced the black rain, asked Mr. Masuda at the World Conferences Against A- and H-Bombs. The survivor was casting a straightforward doubt on the Health Examination Special Designated Area, or the heavy rain area, that was determined by the Japanese government in 1976, as well as the light rain area. Both areas are shaped like trim ovals.

The question stirred Mr. Masuda to act and, on his own, he launched the black rain study. For two years, he read the accounts of A-bomb survivors, searching for statements made about the black rain. Then, in 1987, he began the survey and interviewed more than 1000 people.

Finally, in 1988, Mr. Masuda announced the results of his investigation, concluding that the rainfall area is actually four times the size of the area designated by the government.

The government, however, took no action in response to his findings, arguing that the designation of the area that was exposed to the radioactive black rain can only be based on sound, scientific grounds. The recommendation issued by the Conference for Fundamental Problems of Measures for the Victims of the Atomic Bombs (Kihon-kon), an advisory panel to the Minister of Health and Welfare (now Health, Labor and Welfare), posed a barrier.

The area of black rainfall designated by the government was originally based on interviews Michitaka Uda, a meteorological technician at the Hiroshima District Meteorological Observatory, and others conducted from August to December 1945. Mr. Masuda praised the survey as the best possible one immediately after World War II, while pointing out the limitations of its scope and the volume of its data, among other factors. For example, the decision involving the arc found on the northern edge of the light rain area was made after considering only a set of three data.

No scientific support followed the results of Mr. Masuda's survey. A soil study undertaken from 1988 to 1991 by a panel of experts established in 1988 by the Hiroshima Prefectural Government and the City of Hiroshima could not detect traces of residual radioactivity deriving from the black rain. A meteorological simulation also concluded that the rainfall area is nearly identical to that identified by the Japanese government.

No grounds were found

Itsuzo Shigematsu, 92, an honorary advisor to the Radiation Effects Research Foundation (RERF) and a Tokyo resident, served as chair of the panel. "Though some people felt they were excluded by the line made by the government, no grounds for expanding the designated area were found in those days," Mr. Shigematsu said, looking back on the soil study.

Mr. Masuda, however, remains convinced of the merit of his survey. Those who testified that black rain fell in their area provided precise descriptions of their exposure, such as mention of children playing in the rain in a particular spot. Mr. Masuda believes the truth lies in such specific accounts. "Shouldn't Japan, as the first nation in the world to suffer nuclear attack, review the true effects of black rain instead of rebuffing the request to expand the designated area by sticking strictly to science as justification?" he said. The aging scientist continues to question the responsibility of the Japanese government.