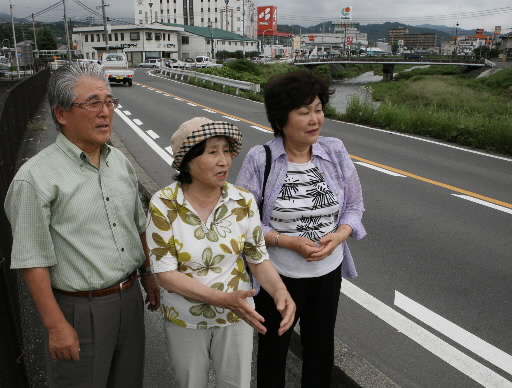 Peace march to hand down experience of black rain

Residents call for expansion of the designated heavy rain area

Residents of the Itsukaichi district in Saeki Ward, Hiroshima, which includes the area formerly called Yahata village in Hiroshima Prefecture at the time of the atomic bombing, are planning a "peace march" this summer. Takamasa Takioka, 72, chair of the Black Rain Association for Saeki Ward, said, "We would like to convey to the next generation the fact that the black rain fell here, too."

Consoling the spirits of the dead

The former Yahata village was located about nine kilometers west of the hypocenter of the atomic bombing. The area is now divided into the Health Examination Special Designated Area (the heavy rain area of the black rain), defined by the government, and the light rain area. The participants in the march are planning to walk for about two kilometers, north to south, in the light rain area. They aim to appeal for the expansion of the Health Examination Special Designated Area, as well as console the spirits of those who encountered the black rain and died as a consequence of this exposure.

"I hope younger generations will become aware that many people are still suffering from the atomic bombing and the black rain," said Yuriko Taniguchi, 69, a member of the association and a resident of Yahata in Saeki Ward. The residents intend to call on second and third generations of those exposed to the black rain to take part in the march.

Behind this effort is the current situation in which those exposed to the black rain are aging. The association, which once had about 330 members, now has roughly 260 members, as some have died and others have become unable to take part in the association's activities due to their physical condition. The generation who were five or six years old at the time of the bombing has begun to play the central role in supporting the group's activities. Some members do not necessarily have clear memories of the black rain. Seiji Takato, 69, secretary general of the association and a resident of Itsukaichichuo, Saeki Ward, said, "We're now facing the last opportunity to pass down the experience of the black rain."

While they can describe the fact that the black rain fell, they have also felt, and still feel, frustration at the difficulty involved in fully conveying the kinds of effects the rain has brought about. Yasuko Ogawa, 69, a former chair of the association and resident of Yahata, Saeki Ward, remembers the last moment of one of her classmates at Yahata Elementary School. The friend complained five years ago from her sickbed: "The nation did nothing for me." She then died of multiple cancers to her internal organs. "As long as the link between the black rain and disease is not recognized, my friend cannot rest in peace."

Council conducts survey on its own

The Hiroshima Prefecture Atomic Bomb Black Rain Council, which leads Hiroshima-based organizations for those exposed to the black rain, is now, on its own, conducting a health survey of about 350 members living in Saeki Ward, Asakita Ward, Akiota Town, and other places. This is its second survey, following a first survey in 2005. With the cooperation of doctors, the council has been asking the subjects about where they were exposed to the black rain and what the rain was like, as well as changes to their health at the time, including diarrhea and hair loss, and their medical histories to date, among other things.

"If we carry out a survey while we have the chance, the data will remain even after we die, enabling research to be conducted," said Masaaki Takano, 72, chair of the council and a resident of Yuki Town, Saeki Ward, resolve in his voice.

Conditions at the time of the bombing are described in the survey responses with such words as "I ate fish floating in the black river" and "Ash was also falling," scenes that cast light on the post-war period for those who experienced the black rain and have since suffered from cancer, anemia, and other disorders. There is no doubt that they were exposed to radiation contained in the rain, but the doses of their exposure and the details of the health effects have not yet been illuminated.

"To date, some experts have launched studies of the rainfall area and the soil. Regarding the effects of the black rain on the human body, too, someone will shed light on the truth one day," said Mr. Takano. Hopes are now placed on the future, when the appeals of those exposed to the black rain can bear fruit.