The Motomachi District, 65 Years After the Atomic Bombing, Part 1: The Lives of Three Survivors [1] 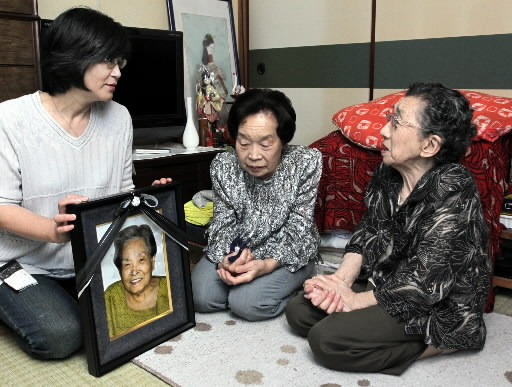 Friend passes away without divulging her experience

On June 13, when the rainy season began to dampen Hiroshima, an A-bomb survivor who lived in a large apartment building in Motomachi, a district in the center of Hiroshima, passed away at the age of 79.

The woman's name was Setsuko Mikami and she died of lung cancer. She spent her final moments in a hospital in Hiroshima where her granddaughter, a nurse, works.

"We'll really miss her…" Shizuko Uno, 86, and Takeyo Masui, 91, residents in the same apartment building, said in a choked voice over the sad news of their friend's death. The three lived in this apartment building for many years. Lately, they each lived alone, after their husbands died and their children had become grown. They had come to care for and support one another.

Ms. Uno visited Ms. Mikami, who was prone to illness, almost every day. When Ms. Uno suffered from osteoporosis and began to have difficulty climbing up and down the stairs, they would call each other on the telephone to confirm each other's well-being.

Ms. Masui made friends with Ms. Mikami while tending a flowerbed on the roof of the apartment building. However, Ms. Masui also had a spinal compression fracture, a condition which made it difficult for her to even leave her apartment over the past few years. She learned about the death of Ms. Mikami from her obituary in the newspaper.

At the end of June, Keiko Nanba, 57, Ms. Mikami's eldest daughter and a resident of Higashi Ward, visited Ms. Masui's room with a photo of her mother. They were joined by Ms. Uno, making it the first "meeting" of the three elderly friends in a long while.

Ms. Nanba described her mother's A-bomb experience to the two women. Prior to the blast, Ms. Mikami had been evacuated to a city north of Hiroshima and she helped care for A-bomb survivors who fled the city in the aftermath of the bombing. "I see," said Ms. Masui, imagining her friend 65 years ago.

Ms. Uno recalled a conversation she had had with Ms. Mikami a few years ago. One day, Ms. Mikami, who had broken a bone, murmured: "The A-bomb Survivor's Certificate helps with the treatment." "Yes, it helps me, too." Ms. Uno believes this was the only time that they touched on the atomic bombing together.

None of the women had been willing to speak about "that day." As Ms. Uno and Ms. Masui looked at the photo of their friend and spoke about their lives, a well of remorse overflowed.

Ms. Uno had been away from Hiroshima at her parents' house, for the birth of a child. Her husband, though, had stayed in the city and, two days after the bombing, she returned to Hiroshima to search for him, ultimately finding him alive. Her eldest son, who was very young then, was with her and they were exposed to the bomb's residual radiation. "I wasn't in Hiroshima that day," said Ms. Uno. "I feel guilty about that."

Ms. Masui hesitated to speak. She disclosed that she was at home, about 2.3 kilometers from the hypocenter, and managed to crawl out from the wreckage of her house. She then fled, leaving behind cries for help along her way to safety.

"I'm a coward, because I ran. I'm sorry for what I did," said Ms. Masui, repeating the charge to herself.

"You don't have to apologize." On behalf of her mother, Ms. Nanba shared words of comfort with them.

Motomachi District
The Motomachi District, where military facilities had been clustered during the war, was reduced to ashes due to the atomic bombing. In 1946, wooden housing for war victims was completed by the City of Hiroshima and other entities, but the demand was still not filled. Between 1956 and 1968, Hiroshima Prefecture and Hiroshima City prepared 930 apartments in medium-rise apartment buildings. In addition, they spent ten years, until 1978, constructing multistory apartment buildings with 2,964 apartments. According to the city, the district had a population of 5,524 as of the end of March 2010, including foreign resident registrations. Among them were 684 hibakusha.