The Motomachi District, 65 Years After the Atomic Bombing, Part 1: The Lives of Three Survivors [2] 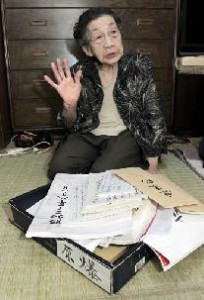 With flowing brushstrokes in ink, she had carefully recorded the following in her account of the atomic bombing: "I could not help all those people who were suffering. I sacrificed them so my life could be saved. I feel so sorry for that…"

The title of the account is "Genbakuki," which translates as "A-bomb Account." It was written by Takeyo Masui, 91, who lives in a large apartment building in the Motomachi district in Naka Ward, Hiroshima. Her account had been hidden away in a paper box with a slip of paper pasted to it that reads: "The Atomic Bombing." The box was kept closed for the past ten years.

"This box is filled with sadness," she said. "If memories of a wedding ceremony were in it, I would have opened the box over and over again." At the Chugoku Shimbun's request, Ms. Masui overcame her reluctance to open the box and permit her written account of the bombing to be read.

Ms. Masui was 26 years old at the time of the blast. That morning she left home and headed to a streetcar stop to go to her workplace, a company involved in the rationing of petroleum that was located in the Hatchobori district (now, Naka Ward). However, she somehow was struck by the feeling not to board the streetcar. Instead, she returned home and was set to clean the family's Buddhist altar. She was about to pray at the altar when a tremendous roar engulfed her and the house collapsed.

Crawling out of the wreckage, she found that her head was covered with blood. Her Buddhist rosary was still clutched in her hands. "I survived," she thought.

Before long, she heard a woman's voice: "Help me, help me." But the woman could not be seen. Then there were shouts, urging her to flee: "The gas company exploded!" "Get out of here! Quick!" Ms. Masui felt flustered by the woman's call for help, but she was unable to do anything for her.

Carrying a little rice among her possessions, she headed to Karuga (now, Asakita Ward), where her mother had been evacuated earlier. Along the way, she passed people whose burnt skin hung from their bodies and others covered with blood. She felt weak at the knees at the sight of the hellish scenes.

She walked until 7 p.m., when she finally met up with her mother. "I've been looking at the sky over Hiroshima since this morning," her mother told her. "I'm so glad you made it out." Her mother embraced Ms. Masui and broke down in tears.

Ms. Masui's husband, who was working for the Army Transport Division in Ujina (now, Minami Ward), also survived the bombing. (He died in 1997 at the age of 82.) After Ms. Masui was reunited with her husband, they stayed for a while at her mother's evacuation site. After learning that housing was being constructed by the city and other entities in Motomachi, they were able to settle into a newly-built wooden house in a corner of the area. She recalls moving into the house at the end of the year of the atomic bombing.

"Even after so many years, I can't forget that woman's voice." She wrote about this memory in her account made in 1995, half a century after she experienced the bombing. She did not want to summon up the memory, but she had come to reflect on the meaning of "peace" in her life, surrounded by her three grandchildren and six great-grandchildren.

"I don't want these children to suffer such a sad experience. As an A-bomb survivor, helping to preserve the peace that has been built on many sacrifices and conveying my experience is a way to repay the obligation I feel."

Still, her remorse over that day has not disappeared. For three years, from 1991, she visited a large number of memorials for the victims of the bombing that stand in the city of Hiroshima. Her photos taken during these visits are also stored in the box that reads "The Atomic Bombing."