The Motomachi District, 65 Years After the Atomic Bombing, Part 1: The Lives of Three Survivors [3] 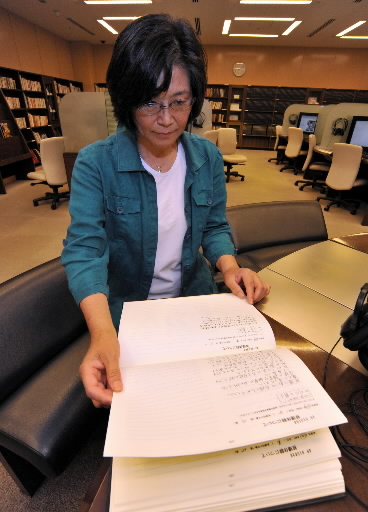 Details of mother's exposure to radiation revealed after her death

Her Atomic Bomb Survivor's Certificate did not clearly indicate when and where she was exposed to radiation from the atomic bomb. Setsuko Mikami, who lived in a large apartment building in the Motomachi district, passed away in mid-June at the age of 79. The certificate did not include this information because Ms. Mikami was not directly exposed to the blast, but was "exposed to radiation while caring for A-bomb survivors."

Even her children had only a vague idea of how their mother was exposed to radiation: "She probably nursed A-bomb survivors who fled Hiroshima to the city of Shobara"…"I heard she helped cremate bodies in Hiroshima." During her lifetime, Ms. Mikami did not divulge the details of her experience 65 years ago.

After Ms. Mikami's funeral, Keiko Nanba, 57, Ms. Mikami's eldest daughter, visited her mother's apartment to organize her things. In the living room was a chest of drawers, placed by the window. Behind the sliding door at the top of the chest, the verification of Ms. Mikami's exposure to the bombing, along with a letter and other items, were found in the back.

The verification states: "The following people were involved in activities caring for A-bomb survivors and cremating the bodies of A-bomb victims for about ten days from August 7, 1945." It contains a list of names of eighth-grade students attending Yamanouchi Nishi National School (now, Yamanouchi Elementary School) in Yamanouchi Nishi Town (now, the city of Shobara) in 1945. Ms. Mikami's homeroom teacher at the time affirmed that Ms. Mikami was exposed to radiation from the atomic bombing while nursing A-bomb survivors. Ms. Mikami's maiden name, Setsuko Uyama, was at the bottom of the list of 53 names.

After the atomic bombing, the former Yamanouchi Nishi National School was used as a temporary hospital ward of the Hiroshima Army Hospital's Shobara Branch. The makeshift ward was located about 70 kilometers along a straight line from the hypocenter. The local residents and students nursed a large number of injured people who were transported to the site by train. Surviving records of that area indicate that, among the wounded, 88 people died.

"I washed bandages in the river and offered flowers at the mortuary. People were dying one after another. It makes me sad to recall that time," said Terumi Doi, 78, looking back on those painful days. Ms. Doi was a classmate of Ms. Mikami and resides in the city of Shobara.

At the beginning of July, I went with Ms. Nanba to the Hiroshima National Peace Memorial Hall for the Atomic Bomb Victims in Peace Memorial Park. Among the roughly 130,000 A-bomb accounts preserved in the hall was an account written by her mother. Ms. Mikami had submitted her A-bomb account to the hall in 1995.

The account included such comments as "I removed maggots from the body of a soldier with tweezers" and "I feel haunted by my experience of that time."

"This is my mother's handwriting," Ms. Nanba said. "She had gentle handwriting." Reading her mother's A-bomb account with great concentration, Ms. Nanba remarked, "She was just 14 years old at the time. It must have been such a shocking experience."

Ms. Mikami's family began living in the Motomachi district from 1949. Before moving into the apartment building in 1976, their house was located to the north of the current Hiroshima Bus Center. Ms. Nanba still remembers the sound of a siren ringing out on the morning of August 6 each year to alert the city to the anniversary of the atomic bombing.

"My mother told me that, because Hiroshima was destroyed by the atomic bomb, she wasn't able to continue with her education and so she abandoned her dream of becoming a teacher." Ms. Nanba, though, went on to attend a local university and earn a teacher's license. Her mother was thrilled.