The Motomachi District, 65 Years After the Atomic Bombing, Part 1: The Lives of Three Survivors [4] 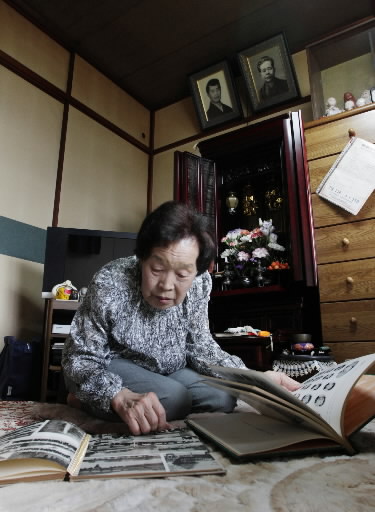 From the balcony of her apartment on the eighth floor of a large apartment building in Motomachi, where she lives alone, Shizuko Uno, 86, an A-bomb survivor, sometimes looks down at Hiroshima Municipal Motomachi Senior High School below.

Motomachi Senior High School was the alma mater of her eldest son, Sumio. "When I see the students there, I remember my boy," said Ms. Uno. "I never imagined he would die young." Sumio died of a heart attack in August 1993 at the age of 48.

On the day of the atomic bombing, Ms. Uno was resting at her parents' house outside the city of Hiroshima after giving birth to a new baby. Two days after the bombing, she put Sumio, then a small child, on her back and headed into Hiroshima to look for her husband Akinobu, who was working at a confectionary shop in the city. (Akinobu died in 1971 at the age of 54.)

Ms. Uno faced the burnt ruins of the city, stretching as far as the eye could see, and this confused her sense of direction. When she finally arrived at their home, she found it burned to the ground. In the rubble was a bucket which contained a rice bowl and other items. As Ms. Uno grasped the bucket, it crumbled into pieces. Hearing someone say that most of the people in Hiroshima had died in the blast, she wondered: "Did my husband survive?"

She grew increasingly worried and uneasy. A few days later, though, she managed to reunite with Akinobu, who was unhurt, as he had fled with an acquaintance.

For a while Ms. Uno's family rented a room in a private house in the suburbs. In 1947, Akinobu came across a large wooden dwelling that had just been built by the city in Motomachi. The building was a row house with ten units. Ms. Uno recalled, "It was our own home, at last. I was really happy."

The post-war period began on this brighter note for Ms. Uno's family. However, Sumio, Ms. Uno's eldest son, was a frail child compared to his elementary school classmates. At the time, though, Ms. Uno did not consider the possibility that his poor health was due to the atomic bombing.

Her awareness of the problem grew when she sought the Atomic Bomb Survivor's Certificate in 1981 on the advice of an acquaintance. A city employee she spoke with about the certificate asked her, "Were you with a young child at the time?" She then felt as if she was to blame for Sumio's condition, since she had entered the city and exposed them both to the bomb's residual radiation.

After entering junior high school, Sumio showed more strength. He worked up a sweat boxing and playing soccer in high school and university. He landed a job and got married. Before long, he struck out on his own and started a business.

However, one day while at work, Sumio felt ill. Driving himself to the hospital, he began weaving on the road and this prompted someone to call an ambulance. Sumio was transported to a hospital, and there he passed away.

"Did my son's death have something to do with the atomic bomb, after all?" wonders Ms. Uno. Even now, 17 years after Sumio died, she faces the family altar three times a day, in the morning, in the evening, and before going to bed. She speaks to the photos of her departed husband and son and chants a heartfelt prayer to the Buddha.