The Motomachi District, 65 Years After the Atomic Bombing, Part 1: The Lives of Three Survivors [5] 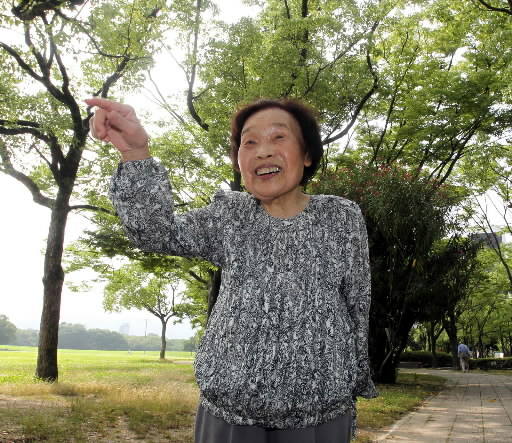 Part 1: The Lives of Three Survivors
Article 5: Striving to live

Helping one another in life at "row house"

The oleander trees have bloomed dark pink this summer, too. At a corner of Hiroshima City Chuo Park in Motomachi, Shizuko Uno, 86, who lives in a nearby apartment building, stood in a grove of trees and recalled with an air of nostalgia: "It was around here. My happiest days were the time we lived in the row house."

From 1946, new dwellings began to stand side by side in this area. Ms. Uno, whose house was burned to the ground in the atomic bombing, moved into a public housing unit within a row house which contained ten units. Though their new home was small, it also served as the workplace of her husband Akinobu, a confectioner who made sweets and sold them to wholesalers. Akinobu died in 1971 at the age of 54.

Akinobu made sweet bean jelly featuring a design of Mt. Fuji with a sunrise and Japanese confections in the shape of a cherry blossom, among other sweets. From time to time the couple even worked through the night to fulfill their orders.

Many A-bomb survivors and the families of A-bomb victims lived in the neighborhood. They shared common sinks and washed their clothes and their rice side by side. They made fires for cooking rice by burning brush that they gathered. One A-bomb survivor in his 20s, a "Mr. Sumida," helped Akinobu with his confectionary work.

"Goods were in short supply in those days, but it wasn't an unhappy time, as we all helped one another," said Ms. Uno. Setsuko Mikami, a friend who died in June at the age of 79, and Takeyo Masui, 91, another friend, also settled in Motomachi.

Ms. Mikami came from present-day Shobara City, where she had been evacuated prior to the bombing. Seeking a new start, she moved to Motomachi in 1949 and ran a tailor's shop with her husband at her home north of the Hiroshima Bus Center in downtown Hiroshima. They once had as many as ten employees at their shop. It is said that Takeshi Koba, then manager of the Hiroshima Toyo Carp, the city's professional baseball team, also visited the shop.

"As my father's reputation as a tailor grew, the shop became very busy. I don't even remember him playing with me." Keiko Nanba, 57, Ms. Mikami's eldest daughter, laughed. Michie Tomoda, 71, an A-bomb survivor and a resident of Motomachi whose mother ran a diner next to the shop, looked back on those days: "I took care of their baby and helped with the shop. Aunt Mikami and her family are still like my own relatives."

Ms. Masui, too, moved into a wooden house in Motomachi shortly after the end of the war. Her husband was a company employee and her mother-in-law, Momoyo, who died in 1985 at the age of 92, started a fish shop to help make ends meet. Ms. Masui, mulling the changes that have taken place over the years, said, "Because I lived through such a painful era, the peace we have now is like a dream."

Ms. Masui planted a willow tree in her garden when the old Hiroshima Municipal Baseball Stadium was constructed just south of there in 1957. The lights and cheers of the night games that reached her home lifted her spirits, she says.

Years passed, and the site where her house used to stand was transformed into Hiroshima City Chuo Park. Ms. Masui, who now resides in a large apartment building, still sees the willow tree standing in a corner of the park when she visits a center for senior citizens twice a week by car. "The tree has thrived," she said. She looked at its branches, swaying in the wind, with thoughts of the peaceful world now around her.