The Motomachi District, 65 Years After the Atomic Bombing, Part 1: The Lives of Three Survivors [7] 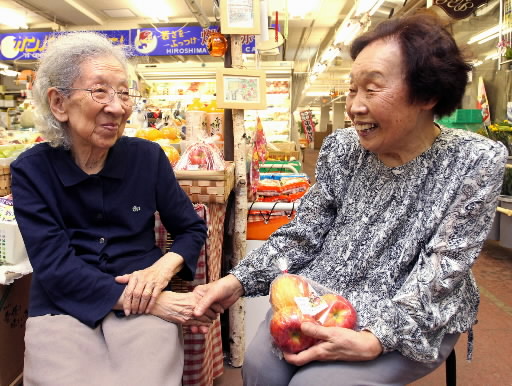 Living with smiles and silent prayers

Standing amid the large apartment buildings in Motomachi, Machino Shoten is always filled with elderly people buying fruits and vegetables.

The store has been in business since 1947 when the housing complex consisted of row houses managed by the city. Shizuko Uno, 86, an atomic bomb survivor who has lived in Motomachi since then, is a regular customer. At the front of the shop she enjoyed a friendly chat with the owner, Chieko Machino, 88, who opened the business after returning from China at the end of the war.

Kimiko Machino, 59, the owner's niece, who manages the store, looked on warmly as the two women chatted. "Most of our customers are elderly people who live alone. I get worried if they don't come for two or three days," she said.

Ms. Uno boils the vegetables she buys until they are soft and prepares various dishes, which she shares with Takeyo Masui. Ms. Masui, a 91-year-old A-bomb survivor, lives on the same floor of their high-rise apartment building. As her legs are growing weak, she finds it difficult to cook for herself. On weekdays she makes do with a boxed lunch that is delivered to her apartment. "The vegetables you make are nice and soft," Ms. Masui said to Ms. Uno as they chatted animatedly. "Let’s hang in there and enjoy life."

A mutual friend of theirs, Setsuko Mikami, an A-bomb survivor who died in June at the age of 79, was also strongly attached to Motomachi. Ms. Mikami suffered from emphysema and a blood disorder and had lived alone in an apartment even after the death of her husband in 2007.

Ms. Mikami's daughter Keiko Namba, 57, said, "My mother's life was a constant struggle with pain. But she was used to Motomachi, and it seems she just couldn't leave here." Nearly every day a member of the family went to Motomachi to make sure Ms. Mikami took her medicine. They also had handrails installed in the hallway of her unit to make life easier for her.

Ms. Namba can understand the feelings of her mother, who insisted on staying in Motomachi. "Motomachi is my hometown, too," she said. "My mother and others are gone, but whenever I come here I feel at home."

Ms. Masui values her friendly relations with her neighbors. She makes glasses cases and small bags and gives them to people to whom she feels indebted as an expression of her gratitude.

"These are peaceful times, but children who've never experienced war just take that for granted," Ms. Masui said. Twice a week she goes to a day care facility for the elderly where she has talked about her experience of the atomic bombing to visiting junior high school students. She said she tells them: "If there is a war, the happiness we enjoy now will be gone."

Sixty-five years have passed since the atomic bombing. August 6 is approaching. Ms. Masui suffered a head injury when her house collapsed, and she fled, ignoring cries for help. "I will never forget that hell," she said. Two days after the bombing Ms. Uno returned to Hiroshima and saw the devastation it had caused.

Every day the two women offer silent prayers for those who died, feeling profound regret for the many lives that were cut short in an instant, and recalling the new lives they built here in Motomachi in the years that followed.