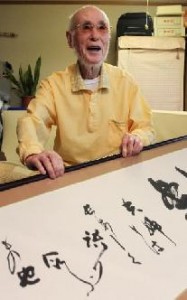 Cruelty of war felt in disposing of the dead

Japanese characters brushed in light strokes dance within a 1.5-meter-wide frame. On the tenth floor of a tall apartment building in Motomachi, Tatsuo Takeuchi, 90, who was exposed to the residual radiation of the atomic bombing when he entered the city of Hiroshima in the aftermath of the blast, shared an example of his calligraphy and grinned from ear to ear.

"I taught myself calligraphy, but this is one of my self-confident works," he explained. "I'm getting older now, though, and I haven't practiced calligraphy recently."

More than 15 years have passed since he moved to Motomachi from Mihara, a small city in Hiroshima Prefecture that is Mr. Takeuchi's hometown. His wife, with whom he lived for 50 years, had begun to see a doctor at Hiroshima City Hospital in Motomachi, which led to their move.

His wife passed away in 1996 at the age of 74. Now, as he lives alone, his eldest daughter and eldest son, both residents of the city, often visit and care for him, such as preparing his meals. "I don't want them to worry about me," said Mr. Takeuchi. Although unable to walk long distances anymore, he still goes out daily, slowly wheeling a handcart.

When asked about his experience of the war, he answered, "I've seldom talked about it." He hesitated for a moment, but poked at his head with his forefinger and said: "Everything is in here." He then searched his memory of those days.

In 1942, when Mr. Takeuchi belonged to the Army Telegraph Corps in Minami Town (now, Minami Ward, Hiroshima), he was ordered to join the fighting overseas. His ship, bound for Guadalcanal, was sunk in a U.S. air raid and Mr. Takeuchi swam to the shore of an uninhabited island. After about two weeks on the island without food, he was finally rescued. Mr. Takeuchi's ship was also subjected to torpedo attacks on his way back to Japan in 1943, and many of his comrades disappeared into the sea before his eyes.

On August 6, 1945, Mr. Takeuchi, then a member of an education corps in Mihara, heard that "Hiroshima was destroyed." Before dawn on August 7, he arrived in Hiroshima by train and walked to the Army Telegraph Corps in the dark. When dawn broke, the burnt ruins of the city, stretching as far as the eye could see, came into sight. He saw a dead woman on her stomach. He heard the pleading voice of a person who was holding out a hand: "Please give me water." He performed his duty, disposing of dead bodies over a period of three days.

"It was all so cruel," he said. "I had thought that I, a soldier, ought to die in war. But when I saw Hiroshima, the forbidden words raced through my mind: 'War is wrong.'"

He got married at the age of 26 and worked as an office clerk for Japan National Railways (now, Japan Railways). Until his retirement, he continued to commute to Hiroshima from Mihara. He looked on closely as the A-bombed city of Hiroshima was revived, with buildings constructed side by side and the citizens rebuilding their lives. Since his retirement, Mr. Takeuchi's life is still tied to this city.

On July 18, a meeting place at the top of his apartment building echoed with laughter. A local group for the elderly was holding a birthday party. Mr. Takeuchi, who was eating homemade dishes with about 30 other senior citizens, looked up at a framed work of calligraphy on the wall and saw the words he himself had written: "Harmony is to be valued."

"Those are the words of Prince Shotoku," he explained. "We have to value harmony and eliminate discord, as war produces victims, whether won or lost." Again and again as he spoke, he repeated the idea that war, no matter the outcome, claims victims from all sides.