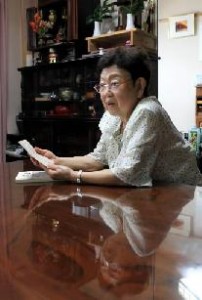 The wife knows her husband's war experience by heart. The husband knows his wife's experience of the atomic bombing by heart.

"We both nearly died, but we managed to survive," said Ritsuko Fujikawa, 79. She lives with her husband Kozo, 85, in a high-rise apartment building in Motomachi.

As both have physical pains--Ms. Fujikawa in her hips, her legs, and heart, and Kozo in his upper vertebrae of his spine--they have taken to accompanying each other when they go out. But since the middle of this month, Kozo has been hospitalized for a short stay. Ms. Fujikawa visits the hospital every day to see him.

In 1955, Mr. and Mrs. Fujikawa moved into a city dwelling in Motomachi. Five years before, they left the city of Miyoshi, Kozo's hometown, and rented a house in Senda Town (now, Naka Ward, Hiroshima). However, that house was not laid adequately with tatami mats and the roof leaked when it rained. Thus, Ms. Fujikawa said that even the small municipal dwelling, built of old wood, brought them relief. "At last, we've reached a place that looks like a real house," she thought at the time.

Their house stood in the middle of a row of three one-story wooden houses. Kozo fashioned some furniture and a bathtub, organizing the family's life. Wanting to "send our children to university at any cost," they worked hard, the husband for a company and the wife at the office of a certified tax accountant.

In their spare moments back then, the couple shared their experiences of the war and the bombing with each other.

At the time of the atomic bombing, Ms. Fujikawa was a third-year student at Hiroshima Municipal First Girls High School (now, Funairi High School). She was facing a mirror on the second floor of her house in in Funairi Naka Town (now, Naka Ward), arranging her hair, when the bomb flashed. She managed to crawl out from under the roof, which had collapsed, but she was unable to locate her mother, who had been downstairs. She kept calling for her mother, despite her neighbor's claim that she had already fled. Ultimately, she found her mother trapped under a tatami mat, weighted down by a cupboard, and managed to pull her out. They then fled together. (Her mother died in 1968 at the age of 75.)

Ms. Fujikawa still keeps in a closet the "casualty certificate" which she obtained in the aftermath of the bombing, though the paper has already turned brown. When she unfolds the certificate, the devastation of the city, and death of the victims--dying one after the other--revisit her mind.

"We're both survivors," said Kozo. He also narrowly escaped death. On August 10, 1945, he was scheduled to take off on a mission from Gunma Prefecture for Saipan in a plane loaded with 750 kilograms of bombs. However, his flight was postponed due to an enemy attack. Before this mission could be undertaken, the war came to an end. He said that a letter from the military reporting on his "final mission" arrived at his parents' home around that time.

Their eldest daughter, 50, is an elementary school teacher. Looking at her parents, who have shared their experiences with one another, she thinks, "As I watch my own children growing up, I feel a keener sense of the hardships my parents went through and their strength." She has begun to ask for more information about her parents' experiences in order to convey them to her children, her future grandchildren, and her students.

On August 6, Ms. Fujikawa will again grill eggplant and offer it to the family's Buddhist altar. On the day of the atomic bombing, eggplant was to be served for her family's breakfast. For the mid-August holidays, she is planning to speak directly to her grandchildren and great-grandchildren about her A-bomb experience. She has already promised to talk about it with them.