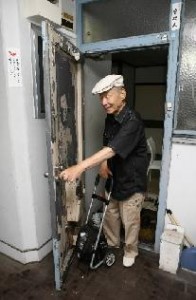 Part 2: Survivors Today
Article 4: Entering the city in the aftermath

At 9 a.m. every Tuesday and Thursday, he puts an oxygen tank on a handcart and opens the front door. On these days he heads to a day-care center for the elderly, partly for rehabilitation. In this way Akiyoshi Furukawa, 79, the resident of an apartment building in Motomachi and a victim of the atomic bomb's residual radiation when he entered the city of Hiroshima in the bombing's aftermath, begins another day.

Since suffering a stroke six years ago, his body has struggled with some paralysis. He was also beset by lung cancer and a heart attack in quick succession. A short walk now leaves him out of breath.

Still, he says, "I don't like to feel discouraged" and so he tries to go out as much as possible, even on days he doesn't visit the center for the elderly. He once rode on an electric bicycle as far as Fuchu Town in Hiroshima Prefecture, a suburb of the city, to gauge his physical condition.

A working couple in the same apartment building sometimes brings their elementary school-age child to his apartment in the daytime to leave the child in his care. "We also go on trips together," said Mr. Furukawa. Another acquaintance of his brings dinner to him once in a while. He appreciates the neighborly ties.

Twenty-one years have passed since he came to live in Motomachi. For the past 17 years, since his mother and his wife passed away, he has lived here by himself.

Early on in his life, Mr. Furukawa lost his father and he lived with his grandmother, his mother, his younger brother, and his younger sister in Ote Town (now, part of Naka Ward) during the war. In March 1945, he was evacuated to present-day Hatsukaichi City. He was there on the morning of August 6, where he felt the blast, because the factory at which he was mobilized for the war effort was closed that day. As he was worried about his home and neighborhood, he went somewhere in the vicinity of Kogobashi (now, Nishi Ward). At the sight of the raging fire there, he gave up going any farther.

Two days later, he went to Ote Town with his family, and found his house completely burnt to the ground. He picked up the bones of his aunt and cousin at his relative's house in the neighborhood.

After the war, Mr. Furukawa served an apprenticeship in Osaka, and returned to Hiroshima in 1950. He then built a house in Yoshijima (now, Naka Ward). During the day he labored as a construction worker and, at night, helped his mother at a Chinese noodle stand they opened in Ote Town. Eventually, in connection with his construction work, he moved to the Middle East and lived there for a long while. When he came back to Hiroshima, for the first time in years, he decided to live in Motomachi.

When Mr. Furukawa was in good health, he never pondered the thought: "If it had not been for the atomic bombing…" He also said to himself, as a survivor exposed to the bomb's radiation when he entered the city after the blast, "It may be impossible to definitively say that the atomic bombing caused my illnesses." However, in 2004, when he was diagnosed with lung cancer, he applied for certification as a sufferer of an A-bomb disease, partly due to the recommendations of those around him. But his claim of "digging up rubble in the city center nearly every day" was rejected six months later.

"It's natural that those who directly experienced the hell of the bombing and those who entered the city afterwards and saw the aftermath would think differently. But aren't they the same," asked Mr. Furukawa, "in that they are all suffering from diseases due to radiation?" Dissatisfied at being summarily rejected by a piece of paper, he joined the class action lawsuits over A-bomb disease certification, and the Japanese government recognized him as an A-bomb sufferer prior to a court ruling in March 2009.

With his body partly paralyzed, Mr. Furukawa can no longer do the things he once did. Still, he said, "I don't want to just give up. I have to go on." Today, too, he will exert himself by doing housework and stepping out again.