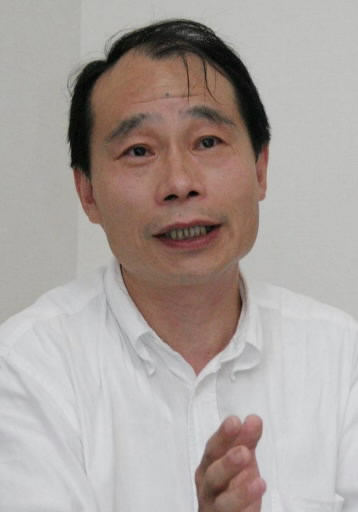 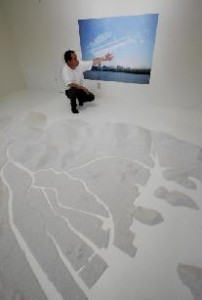 A white vision of Hiroshima fills the floor. Almost 400 kilograms of white limestone, the kind often used for gravel in gardens, was used to create a three-dimensional map of Hiroshima. The piece "Land in Hiroshima" was displayed at an art gallery in central Hiroshima for six days in early July.

The immaculate whiteness of the limestone is reminiscent of the flash of the atomic bomb, the ashes of a fire-ravaged area, or the bones of victims. On the wall is a large photo of present-day Hiroshima. The mysterious white clouds in the sky resemble a runway.

"This represents the U.S. Air Station Futenma in Okinawa," explained Fan Shuru, 49. "I felt the issue of Futenma is not closely felt in Hiroshima so I drew it in white in the sky, asking what if the base's new location, which is still up in the air, became Hiroshima?"

The gravel mounds that make up the map were inspired by the dry nature of the Japanese landscape garden. The piece strongly evokes the image of the scorched earth after the bombing. It also poses the artist's question: Is your interest in other people's problems "drying up"?

Seventeen years have passed since Mr. Fan moved to Japan from China. He married a Japanese student in Beijing and moved to his wife's hometown before the birth of their child. His wife is a second-generation A-bomb survivor, and some of her relatives died in the atomic bombing. "In China, the atomic bombing is thought of as something that helped end the war. When I came to Hiroshima, I realized keenly that this small city bears the fate of the world on its shoulders," the artist said.

On the other hand, he feels some frustration. "When it comes to the issue of peace, the focus is often only on the elimination of nuclear weapons," he said. "Only in raising the level of its appeal to the elimination of war itself will Hiroshima receive recognition for its efforts throughout the world. And I believe this is what the world is expecting."

Before Mr. Fan created this work, he had refrained from making Hiroshima a direct theme of his art. "As I never experienced the atomic bombing, I should not put empathy into my pieces without careful consideration," he thought. But he decided to take on the subject, incorporating criticism into his expression.

In the process of his maturation as an artist, he was influenced by the Tiananmen Square incident in 1989. At the time he was an instructor at Peking University and he went to the square during the disturbance. After the military crackdown on the demonstrators, some of his acquaintances never came home. "Reacting to the times entails harsh choices and sometimes means a matter of life and death," he said.

At the same time, he feels he should not turn his back to the world at hand. "Contemporary art is called contemporary because it expresses the times," he said. "It has significance only when it faces the times." In his piece about Hiroshima, he presents the atomic bombing of 65 years ago in connection with the current issue of U.S. military bases, prompting viewers to think.

He describes the style of his art as "humorous but biting." "Disneyland Project," which he released last year, is a series of paintings in which military bases, such as the Marine Corps Air Station in Iwakuni, are repainted into theme parks built with U.S. wealth. By contrasting military bases with amusement parks, he sought also to direct people's attention to the violence which wealth can produce.

Another of his works is a heart-shaped balloon which represents the shape of Iwaishima Island in Kaminoseki, Yamaguchi Prefecture. A movement against the construction of a nuclear power plant there is continuing. The balloon was flown in the sky in the city of Yamaguchi on Valentine's Day this year, urging people to show more concern over this issue.

His way of expression sometimes suggests a form of social criticism, and some people have the attitude that "Non-Japanese should remain quiet." But Mr. Fan said, "That's absolutely wrong. These are global issues." The world is everything that surrounds the artist at this moment, he believes.

Fan Shuru
Born in Jiangsu Province, China, Fan Shuru studied oil painting at Nanjing Normal University and its graduate school. After teaching at Peking University, he moved to Japan in 1993 and resides in Naka Ward, Hiroshima. In 2003 he won the grand prize at an art competition in Hiroshima. In 2008 he was awarded the grand prize at the Yamaguchi Prefecture Art Exhibition.