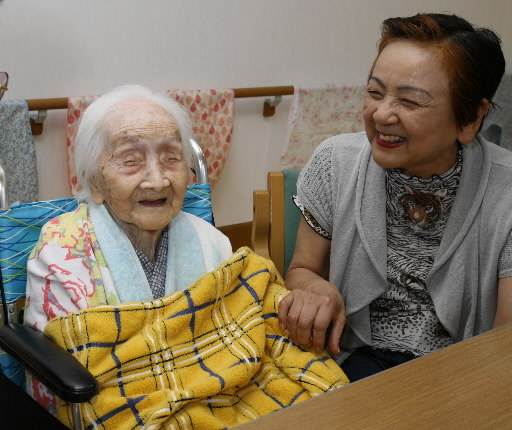 Fujiko Mori is 100 years old, an A-bomb survivor who lives in a high-rise apartment building in Motomachi. Ms. Mori broke her left leg in a fall in late June and was admitted to a hospital in Asaminami Ward.

Takako Miyazaki, 64, a resident of Asaminami Ward, is a care-giver who has visited Motomachi and cared for Ms. Mori for the past seven years. She goes to see Ms. Mori at the hospital almost every day and looks after her, doing her laundry and taking care of other tasks. "I'm caring for Ms. Mori, because I want to do for her what I wasn't able to do for my mother," said Ms. Miyazaki, explaining the motivation that links Ms. Mori to her late mother.

"Yes, I remember. I was in Ushita. There was a flash."

Ms. Mori was 35 years old at the time. She experienced the bombing in the Ushita area (now, Higashi Ward), about 2.3 kilometers from the hypocenter. Her house was partially destroyed. Her parents' house, which contained a pharmacy selling herbal medicines and medicines prepared from family recipes, was located in Nakajima Honmachi (now, part of Hiroshima Peace Memorial Park). Ms. Mori was worried about her relatives in the vicinity, and visited the hypocenter area as well in the aftermath of the blast. Ms. Mori said her face then exhibited what seemed like burns, though the cause was unknown.

Her niece suffered burns to her entire body in the bombing and she fled to Ms. Mori's house. Despite receiving frantic care, the niece became infested with maggots and died of her wounds.

"I haven't talked about the atomic bombing," Ms. Mori said. "I've tried hard to avoid talking about such uncomfortable things." She added, "We must have peace."

Ms. Mori, who lost her husband after the war, began to live alone in an apartment in Motomachi in 1978.

Her building is located near a department store and is convenient for shopping. Until a few years ago, she enjoyed going out in her kimono. She also attended social events for the residents and gatherings for senior residents. As Ms. Mori does not want to leave Motomachi, where traditional neighborly ties still exist, she has continued to live here with the help of others, including Ms. Miyazaki.

Ms. Miyazaki revealed, "In fact, I suffered prenatal exposure to the bomb's radiation. I understand Ms. Mori's hardships well." Ms. Miyazaki was exposed to the atomic bombing while in her mother's uterus at her house in Showa Town (now, Naka Ward), about 1.6 kilometers from the hypocenter. She was born in October of that year.

Ms. Miyazaki's second eldest brother was trapped under their house and died young at the age of three. Her eldest sister, aged four at the time, suffered severe burns on her back and the back of her head. Ms. Miyazaki's mother, who died in 1993 at the age of 81, was roughly a member of Ms. Mori's generation.

"My mother made desperate efforts to protect me in her body. My older brother died and my older sister suffered burns, which must have upset her very much. Still, my mother gave birth to me. I'm really grateful to her."

For the past few years, Ms. Miyazaki has observed August 6 in Ms. Mori's apartment. She joins her hands at the family's Buddhist altar to pray for the souls of the A-bomb victims. Another August 6 looms this year, too.

Ms. Miyazaki, at Ms. Mori's bedside in the hospital, told her: "You have to get better soon and come back to Motomachi."