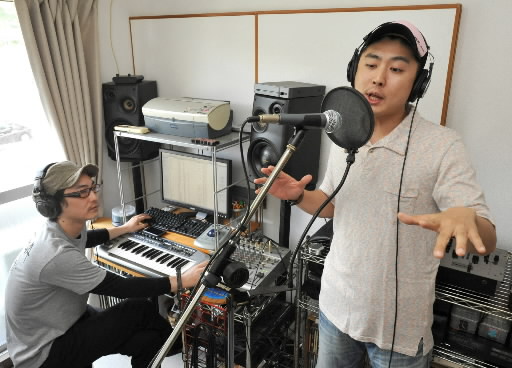 
Wishing for peace with a steady beat

"Can you see the Shape of Hiroshima? This is the way human beings should be."

The steady beat of hip-hop, a sound of American origin, is used to convey the ideas of "Hiroshima" and "peace" through sharply-written verses.

The hip-hop unit EXCUSE is made up of two performers: Koichi Sato, 31, known as KC, and Yusuke Nakata, 30, dubbed "APE-LAW." The song they sing is called "Shape of Hiroshima." Songs about Hiroshima are often sung in a solemn manner, but EXCUSE created a song in a hip-hop style and they have presented it at such places as live performance clubs in Hiroshima over the past five years.

The song, which is 5 minutes and 7 seconds in length, consists of chorus parts and solo parts. In the chorus, the duo stresses the importance of conveying the experience of Hiroshima. The words "peace one time, peace one life" indicate that all people should have the chance to live in peace in their lifetimes. This phrase is repeated many times through the song.

In the solo portions, Mr. Sato and Mr. Nakata each created their words freely based on their own thoughts. "I want to convey the horrible, red world of that day, and the deep hopes for peace, but continual conflicts never cease." "Sprouts emerge in the wilderness, flowers bloom and seeds fly as they spread through the sky." Mr. Nakata sings of his frustration over the human penchant for waging repeated wars, but at the same time, he offers a prayer for the day when "flowers bloom" in the hearts of human beings.

"For all the desires of the people who died, what can we do, in our lives today?" Mr. Sato poses this question then adds a warning: "Unless we think and we act, on our own, history will repeat the past."

"Shape of Hiroshima" has now become the unit's signature song. The song was inspired by the concern the two men, who were born and raised in Hiroshima, grew to feel over the issue of peace. Although they had often heard about the horror of the atomic bombing at school and at home when they were young, their awareness of the tragedy remained low because "the story might have been too familiar to us."

However, 65 years later, nuclear weapons still persist in the world. At the same time, the memory of the bombing has begun to fade as the A-bomb survivors age and decline in number. With a rising recognition of the importance of passing on the A-bomb experience, Mr. Sato and Mr. Nakata came to believe that "this might be the mission of musicians who perform in Hiroshima."

At the same time, they felt some uneasiness, wondering if it would be acceptable to sing about Hiroshima in a hip-hop style when they themselves had no experience of the atomic bombing. After thinking it through, they decided that they would challenge themselves to create such a song after they gained more confidence in composing music. They made the commitment to "create a successful song that would convey to people our deeper thoughts."

Finally, after growing in their skill as songwriters, they wrote the song "Shape of Hiroshima." "The words came out quickly," they said. This was in 2005, six years after they formed EXCUSE. That year, by chance, marked the 60th anniversary of the atomic bombing.

The duo quickly added the song to their repertoire for live performances. They said, "Our audiences in the clubs began moving to the beat and singing to themselves. We felt sure that they had gotten our message."

Though lately they have been unable to perform as frequently, due to their day jobs, the thoughts they put into the song remain the same in their minds. "To share that sense of togetherness we felt at the clubs with as many people as possible," the unit launched a website where the song can be downloaded free of charge, a new means of transmitting their message.

The song "Shape of Hiroshima" can be downloaded from the EXCUSE website. http://www.legendelta.com/hiroshima.html

EXCUSE
Koichi Sato and Yusuke Nakata, friends since their childhood days, formed the hip-hop unit named EXCUSE while students at Hiroshima Shudo University. They perform as musicians while maintaining day jobs, Mr. Sato with an IT related company and Mr. Nakata with an accounting firm. The duo has released albums of their music produced independently including "Re: mix." Both are residents of Nishi Ward, Hiroshima.