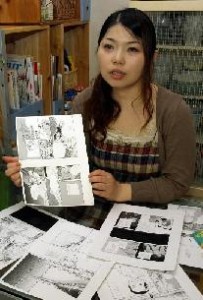 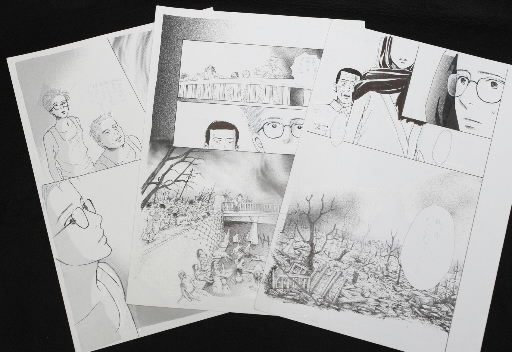 The tragedy that befell Hiroshima is rendered in pictures and words in each frame. The main character stares on at the hellish devastation, people dying one after another. The look on his face, with few words to accompany the image, reflects his uncertainty, presenting an impression different from the impression offered by the original novel.

The novel "Natsu no Hana" ("Summer Flowers"), was written by Tamiki Hara (1905-1951), a Hiroshima-born author, based on his own A-bomb experience. The "Natsu no Hana" trilogy, in which Mr. Hara described the time before the bombing, the day of the bombing, and the human drama of a family fleeing to the suburbs for safety, has been made into a manga.

It is the first time that Uzuki Yamada, 36, a manga artist, has created a manga based on a novel. When she first read "Natsu no Hana," she confessed, she found it difficult and "had trouble understanding the story." She then read "Utsukushiki Shi no Kishini" ("On the Shore of Beautiful Death"), a novel by Mr. Hara about his late wife, and her impression of the author grew. "The language is beautiful and his perspective, as if seeing from some distance, is striking," Ms. Yamada said. "I continued to read and reread his work and pictures began to form in my mind."

Ms. Yamada primarily creates manga for girls. This time, though, she drew "simple illustrations with a light touch" so the work would not be for children. For the manga's structure, she employed conventional square frames and made good use of landscape-oriented frames to fully depict the settings. These frames produce impact in a variety of scenes, particularly a scene in which a quiet nature setting spreads out in front of the family after they had passed through the ruined city by wagon in their quest for refuge in the suburbs.

At the same time, she used silhouette, among other techniques, to depict people who are wounded, in an attempt to avoid making these images too graphic. "I tried to express Hara's transparent style through the style of drawing," she explained.

Because she had trouble grasping the story at first, she sought to create a manga which could be easily understood by readers. She spent a significant amount of time on the work of fashioning a "storyboard," the so-called "blueprint" of manga, in which the arrangement of frames, rough illustrations, and words is made. She discovered several ways to make the manga read smoothly, including her arrangement of the sections of the "Natsu no Hana" trilogy in the order of time rather than the order of original publication: "Kaimetsu no Jokyoku" ("Prelude to Annihilation"), followed by "Natsu no Hana," then "Haikyo kara" ("From the Ruins"). Ms. Yamada has compressed each story to about one-third of the originals, resulting in a manga of about 200 pages.

Ms. Yamada was born and raised in Hiroshima, less than 1.5 kilometers from Mr. Hara's parents' house. She returned to Hiroshima several times for this project and interviewed a number of people, including Tokihiko Hara, 75, Mr. Hara's nephew. She also traced the route that Mr. Hara, who experienced the atomic bombing at his parents' house, took from Shukkeien Garden to Hiroshima Toshogu Shrine while seeking refuge.

Ms. Yamada's grandmother and father were both exposed to the atomic bomb. She has heard that her father, who was two at the time, nearly died at one point. "If my father had fallen victim to the bombing, I would not have existed," she said. "When I think about it, I feel a kind of curious connection to Hara, who survived the bombing and realized that he had to write about it and convey his experience to others."

Whether she had been able to fully depict Mr. Hara's world, Ms. Yamada said it was "difficult" to answer this question. "Because those who have read 'Natsu no Hana' have already formed personal images of the story in their mind," she explained. "As a native of Hiroshima, my main aim was to make the work satisfactory for readers in Hiroshima."

Ms. Yamada dreamed to becoming a manga artist since the time she was a child. "I remember when I was in elementary school, I thought, 'I was born in Hiroshima so maybe I can create manga about the atomic bombing.'"

The plot for her next work is undecided, but she is sensing positive signs for her new direction as a manga artist.

Uzuki Yamada
Uzuki Yamada (born Miki Matsumoto in Naka Ward, Hiroshima) made her debut as a manga artist with her work "Mannish Girl" in the magazine "Bessatsu Marguerite," published by Shueisha Inc. in 1995. She has lived in Tokyo since 2005. The manga version of "Natsu no Hana" ("Summer Flowers") is part of a series of manga based on the works of great writers. The manga "Natsu no Hana" is scheduled to be published in August by Home-sha publishing company, affiliated with Shueisha.