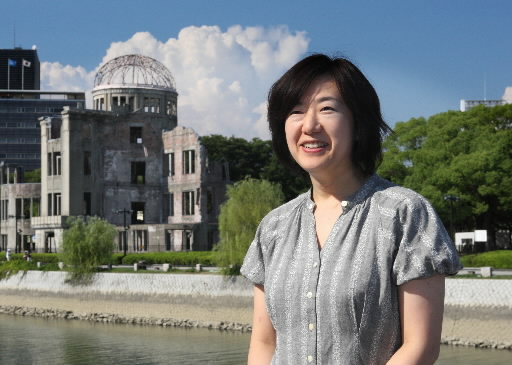 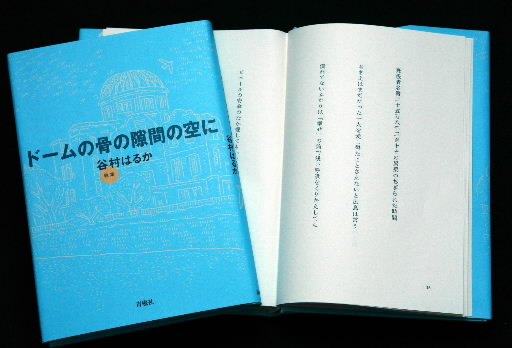 Since the day everyone alive lost someone close to them, no one has been without injury in this city.

Voices come down from the sky through the bones of the A-bomb Dome, telling me not to let go of the hands of my loved ones.

These are elegies of sympathy for the pain of Hiroshima. Though more than 60 years have passed and the city has been reconstructed, there is still grief that cannot be forgotten. As a result, people live cherishing those around them. Haruka Tanimura, 39, is a poet of tanka, a Japanese poem of 31 syllables. In the poem depicting the whispers she heard when gazing up at the A-bomb Dome, she expressed the wish of the dead. The poem, in its appeal to appreciate the living, is also a poem of love.

Hiroshima had a shocking experience of loss. This is how Ms. Tanimura sees the city. "Hiroshima seems to understand the fact that we may leave the world tomorrow and that there is no such thing as leisure time," she said. She senses the strong life force of the city and the people who live here.

Hiroshima said to me every day: "If you neglect to treasure those around you, you will surely regret it."

Ms. Tanimura published an anthology of tanka poems last year entitled "Domu no Hone no Sukima no Sora ni" ("Seeing the Sky Through the Bones of the A-bomb Dome"). The book is a compilation of 430 poems that she wrote over the span of 11 years, from 1998, when she began composing tanka.

Tokyo, Osaka, the Hokuriku region, and the Kyushu region... She wrote about her yearning for the towns she had visited or lived in, about her longing for people, about jealousy, encounters, and partings. What forms the nucleus of her spirit, though, is Hiroshima, where she lived for two and a half years. "I feel a compatibility with Hiroshima, including the climate and the outspoken nature of the people." She composed a large number of tanka poems in Hiroshima.

Among them is a poem which depicts the stagnation of the river under Peace Bridge. In the river, where A-bomb victims died, there is something gentle that soothes those who lost their loved ones. As she also was suffering a broken heart at the time, the words flowed from her quite naturally.

The river, gleaming black, fixes its eye on me, the sorrow of its numberless dead decrying my loss of the living.

Four years ago, Ms. Tanimura was awarded third prize in the New Starlet Award contest by Tanka Kenkyu-sha for a series of 30 tanka poems conveying Hiroshima. However, she felt uneasy about the comment by a judge, telling her "More focus on ordinary Hiroshima is desirable." Ms. Tanimura said, "Does the world 'ordinary' indicate everyday life in Hiroshima that is removed from the atomic bombing?"

Some tanka poets acquainted with Ms. Tanimura have also said, "Hiroshima again?" and "I can't say anything critical when you create tanka on this subject." One young poet even remarked, "It lacks discretion." The poet appeared to blame Ms. Tanimura for a poem interweaving the atomic bombing with love. "Everybody braces themselves and overreacts to the subject," she said.

By writing the word "Hiroshima," when speaking of the atomic bomb, should I simply ignore Hiroshima today?

In the spring of 2004, Ms. Tanimura moved to Hiroshima as a journalist for a national newspaper. She was engaged in news coverage of peace issues as well. Even away from her work as a reporter, she "found a notice announcing a memorial service for A-bomb victims at a Bon Festival and learned that the female owner of her favorite nightspot was exposed to the atomic bombing." Hiroshima's experience of the atomic bombing and everyday life in the city exist together. "If we try to separate them, this would lead to the perception of the A-bombed city as something sacred or taboo, and cause people to avert their eyes from the real Hiroshima."

Though Ms. Tanimura resigned from the newspaper company one year after she came to Hiroshima, she continued to live here. She composed poetry on the nature of Hiroshima as an A-bombed city. And she wrote about daily life and love, as love and Hiroshima are not unrelated issues, she feels.

Ms. Tanimura began writing tanka as a way to practice writing concise sentences. Unlike prose, she was able to express her inner feelings without explanation. "I express my feelings in tanka poems in my own words, even if they may be difficult to understand. I believe these poems will be more universal and will communicate more than poems intended to be conveyed to many people."

I want to die after, at the very least, gaining the strength to descend to the brink of the A-bomb victims' pain.

While creating a tanka poem about a personal parting, she ultimately produced this more universal poem about Hiroshima. The A-bombed city has seen untold numbers of final partings and the mourning of those left behind. "The words grew beyond me, turning into a poem conveying another voice and a new connection."

The poet, who also loves the Hiroshima Toyo Carp, the city's professional baseball team, and the Hiroshima Symphony Orchestra, said, "I'll surely come back to Hiroshima again." What kinds of poetry will she weave in the future?

Haruka Tanimura
Ms. Tanimura was born in Shibuya Ward, Tokyo, and graduated from Waseda University. She is a member of "Tankajin" and "Es," both societies for tanka poetry. From the spring of 2004, she lived in Naka Ward, Hiroshima for two and a half years. In March 2009, she published her first tanka-poem anthology “Domu no Hone no Sukima no Sora ni” ("Seeing the Sky Through the Bones of the A-bomb Dome") by Seijisha publishing company. Ms. Tanimura now lives in Shinjuku Ward, Tokyo.