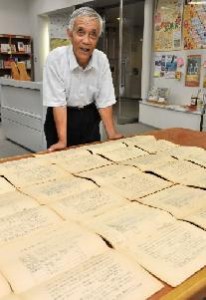 
Continuing to question the atomic bombing

Hiromu Morishita, 79, a resident of Saeki Ward, Hiroshima, is now hoping to digitize the answers given by his old schoolmates of the same year in response to a survey of A-bomb experiences and, with their consent, make this data public. The answers, handwritten by 35 people who were third-year students at Hiroshima First Middle School 65 years ago, were submitted to him years ago and he has preserved them ever since.

When the Chugoku Shimbun visited Mr. Morishita at his home, he spoke about his intentions in an quiet tone: "Even though we were exposed to the atomic bombing at the same location, our ways of living and thinking since then have been different. I want to convey, and leave for future generations, what everyone, as a whole, has thought." He added that he felt pressed to undertake this effort now, with his 80th decade fast approaching.

The survey, which began with a question about the work situations of mobilized students during the war, asked for such information as their experience at the moment of the atomic bombing, their escape routes, the state of their injuries, the fate of their family members, their perceptions of the end of the war, their paths after graduating from the school, difficulties involving marriage and worries about handing down genetic effects, and their views on campaigns opposing atomic and hydrogen bombs.

The survey asked the respondents about 80 questions. Mr. Morishita himself composed the questions while working as a teacher at Hiroshima Prefectural Hatsukaichi Senior High School. He sought answers to the survey in the summer of 1967, when Japan was, after the war, riding a wave of high economic growth.

It was a survey designed to explore the reality of the atomic bombing through a specific group of people who were students of the same year at the same school. In light of the history of Hiroshima, this survey was an effort undertaken prior to the project from 1968 by the then Research Institute for Nuclear Medicine and Biology at Hiroshima University and other entities which intended to "restore the map of the hypocenter" in order to examine "how the atomic bombing impacted all the people of a specific location."

In 1974, Mr. Morishita contacted the respondents and asked how their thoughts had developed. Last year, he sought them out again and, from the people he was able to locate, obtained information on their current circumstances. "Blanks" also became noticeable in the spaces designated for answers. These blanks hinted at the respondents' complicated feelings about not wanting to talk about the event, even to their old schoolmates, preferring to remain silent.

Mr. Morishita experienced the atomic bombing around the west end of the Tsurumi Bridge, facing the Kyobashi River, in Naka Ward. He had been mobilized for the city's sixth round of work to dismantle buildings and was listening to instructions before the day's duty began. He described the moment of the bombing as being "thrown into a huge blast furnace." Though he was out in the open, even lacking something to provide shielding, he miraculously escaped death along with about 75 of his schoolmates in the third year. However, his mother Yoshiko, who was 40 at the time, was trapped under their toppled home and died.

Mr. Morishita, who became bedridden due to severe burns, made it through those difficult days and returned to school the next spring. In 1955, after graduating from Hiroshima University, he became a teacher. While harboring "resentment that made me feel like shouting that the keloid scar on my face was due to the atomic bombing," Mr. Morishita was in anguish, too, wondering "how to live as a human being." Before long, he came to face the atomic bombing squarely.

He joined the "World Peace Pilgrimage" in 1964, which was promoted during the Cold War by Barbara Reynolds (1915-1990), an American peace activist who moved to Hiroshima and traveled to the United States and European nations with A-bomb survivors and other Hiroshima citizens. After returning to Japan, Mr. Morishita put his heart into peace education. He accepted the position of chairman of the World Friendship Center, which was founded by Ms. Reynolds, and served in that capacity for 25 years.

"Why can't we rid ourselves of nuclear weapons, conflict, and poverty?" Mr. Morishita asked. "A solution to these problems can be found by learning and thinking for oneself. Having the experience of the atomic bombing isn't needed to find the solution." As long as his physical condition and schedule allow, Mr. Morishita still continues to speak to young people.

When he checked the whereabouts of the 35 schoolmates who responded to his survey, he discovered that ten have already passed away. "Considering my age, time is running out for me, too," said Mr. Morishita. "I think my last duty is to properly compile the results of the survey and leave them for future generations."

How have his schoolmates who responded to the survey lived out their lives? The Chugoku Shimbun will continue this series by visiting those who were once third-year students at Hiroshima First Middle School.