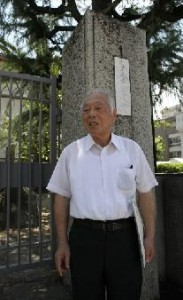 
Devotion of friends to the nation is not forgotten

The first collection of essays about the atomic bombing was produced in 1946, the year after the blast. It is a mimeographed text of 67 pages titled "Wellspring: Dedicated to the Lost Souls." The collection was compiled by surviving students who were in their third year at Hiroshima First Middle School when they were exposed to the bombing. Only one original copy is known to have survived.

On August 6, 1945, the fifth class of third-year students, known as Class 35, was mobilized to help dismantle houses in an area about 800 meters from the hypocenter to create a fire lane in the event of air raids. All the students at the work site, about 40 children, perished in the blast. These students, though, had originally been working at a manufacturer of airplane parts, Hiroshima Airline, located far from the hypocenter. They were dubbed the "shield squad."

"It's not right for me to talk about that experience. When I think of my classmates who lost their lives, I can't shake a sense of guilt."

Yorimi Sugo, 80, once a student of Class 35, opened the door with a puzzled expression upon receiving a photocopy of the original collection of essays. In the collection is a commemoration to his late classmates: "Dedicating their lives to the nation was their greatest desire."

Mr. Sugo had been mobilized at Hiroshima Airline since the fall of 1944, and was engaged in the processing of sheet metal, among other duties, each day. At one point some graduates of Hiroshima First Middle School, who had become students in a preparatory course for the Imperial Japanese Navy, came to provide a pep talk to the students at the factory. Though Mr. Sugo felt that the war effort was faltering, his sense of mission overcame his concern. Seen off by his classmates standing along the road near the railway, he left Hiroshima for Yamaguchi Prefecture to enter the Naval Communication School, which had opened in 1943. The date was July 25, 1945.

Mr. Sugo said he learned about the devastating attack on Hiroshima through an announcement at his new school. Upon his return to Hiroshima on August 18, he was exposed to the bomb's residual radiation. When he arrived at his family's home, his parents were there, but not his sister Mitsue, then 13, a first-year student at Hiroshima Municipal Girls' High School. She had gone missing after leaving the house that day to help with the building demolition work in the southern part of what is now Hiroshima Peace Memorial Park. Twenty years would pass before her remains were found.

When he returned to Hiroshima First Middle School, Mr. Sugo was made to suffer harsh words and stares. One teacher wondered, "All your classmates are dead, but you're still alive?" He hated explaining why he had survived. Beset by remorse, he visited the graves of his classmates. "Some parents were thankful that I visited the graves," he recalled, "but others looked at me in a reproachful way." He added, "Later, Mr. Akita asked me to help him."

Masayuki Akita, who died in 1975, was the former president of the Hiroshima municipal assembly and the founder of an association for the war-bereaved of Hiroshima First Middle School, a group that still exists. He was one of its members when the association raised a monument for the school's dead in 1948, when Japan was under U.S. occupation. Mr. Akita lost his eldest son, who was a third-year student at the school, to the bombing.

Mr. Sugo made efforts to create a list of the families of A-bomb victims within the school community. Even while away from Hiroshima attending college or busy as a board member of a company in Hiroshima, he never relinquished the responsibility he felt to organize an annual memorial service. He also became involved in establishing the Merciful Consoling Kannon for Mobilized A-bomb Victim-Students, which was unveiled, near Peace Boulevard, in 1966.

"Recently, only the existence of nuclear weapons is stressed, which I feel uncomfortable about," Mr. Sugo said. He brought his reflection on his painful memories to a close by remarking, "I also would like young people to remember those who devoted themselves to Japan to the very end, and died for the country, which may be hard for today's young people to understand."