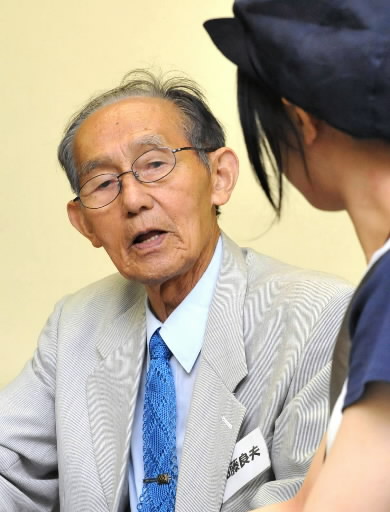 "I will die for my country." This was the vow made by Yoshio Kato, 81, when he entered Hiroshima First Middle School. He offered a photo from the time he took part in a drill for middle school students which involved flying a glider at the East Drill Ground, north of Hiroshima Station. "I had no qualms about that vow," he said casually at his shop in Hiroshima that sells fabric for kimono.

On August 6, 1945, Mr. Kato was a third-year student aspiring to become a fighter pilot. That day he was mobilized to help dismantle buildings to create a fire lane around the west end of Tsurumi Bridge, 1.5 kilometers from the hypocenter, when he was blown into the air by the atomic blast. After regaining consciousness, he jumped into the nearby Kyobashi River when he heard a classmate say, "Your skin is burned and peeling, too."

Mr. Kato then dragged himself out of the water and ran along the streetcar tracks, passing from Hiroshima Station through the East Drill Ground, heading over the Nakayama pass, and reaching his home. His mother applied vegetable oil to his wounds. His sister Masako, then 13, a first-year student at Hiroshima Prefectural First Girls' Middle School who was also mobilized to dismantle houses, did not return home, even by the next morning.

"My mother went with a cart to the site where my sister was mobilized and found her body with a tree limb stuck in her head," Mr. Kato said. "My mother recognized my sister from the name tag sewn to her clothes. I didn't cry when I saw her body." He also referred to the day Emperor Hirohito announced that the war was over. "I vowed to avenge my comrades," he said. Looking back on the events of 65 years ago, his eyes welled with tears.

The idea that one's life is as light as a feather had become deeply ingrained in his mind, and this perspective did not change easily even after he heard that democracy had come to Japan.

The turning point came when he met Pedro Arrupe (who died in 1991), the Jesuit superior of the Nagatsuka Monastery in suburban Hiroshima. Father Arrupe was from Spain and for this reason he was not deported home when Japan went to war with the United States. He was also a doctor and he tended to the injured who thronged to his monastery after the atomic bomb exploded.

Because the Hiroshima First Middle School building was totally destroyed in the bombing, it began holding classes at several locations. One class met at Yamamoto National School, now Municipal Yamamoto Elementary School, which was located near the monastery. An English class, organized by the Jesuits, was also offered at the school. Mr. Kato came to enjoy visits to the monastery and his mind was opened through his conversations with Father Arrupe. When the boy argued for his vow that he was willing to die for his country, Father Arrupe responded that such thinking is suicide. Two years after the bombing, Mr. Kato was baptized.

After Mr. Kato graduated from Hiroshima First Middle School, he took over the family business selling fabric for kimono. At 24, he married a woman he met at church. His wife Fumiko, now 80, was mobilized for work at the Hiroshima Communications Bureau on the day of the bombing.

The Katos lost their second son 45 days after his birth, but they were blessed with another son and a daughter. As the family business grew from peddling fabric by bicycle, he also began serving the community in child welfare roles. His family also hosted exchange students from the United States. However, before turning 60, he was diagnosed with cancer.

"I was upset to think I might die," Mr. Kato recalled. "The experience reminded me how vulnerable human beings are." He had surgery in the fall of 1989, an operation in which his stomach was removed, and was released from the hospital in early 1989. (His surgery, and his release, coincided with the end of the Showa Era, 1925-1989, and the start of the Heisei Era.) With the encouragement of his wife, he began accepting requests to relate his A-bomb experience in the summer of 1990.

On August 6, 2010, he attended a gathering with his wife Fumiko where A-bomb survivors shared their experiences with students from across Japan. "I was a military boy," he began, as he recounted the days he lived in fealty to Japan.