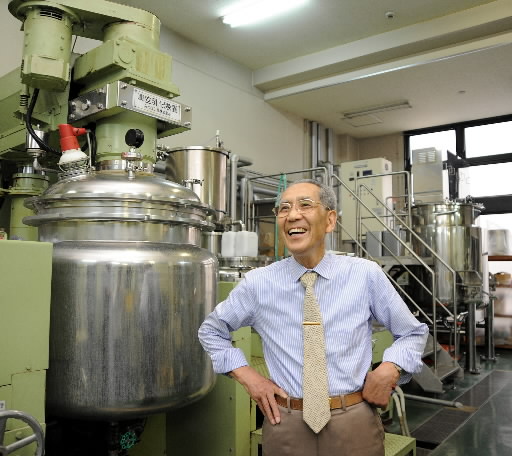 
Fighting off illness and founding a company

Responding to a survey about A-bomb experiences, his answer to a question regarding "life after graduation from Hiroshima First Middle School" described job changes and his medical history, including surgery to remove part of his intestine and stomach. Kishiro Kamata, 79, a resident of Tokyo, completed the survey in 1974, when Japan was struck by the oil shock of that time. His answer to another question about "what makes you happy" was simply "stabilizing my company."

The "Shiro Chemical Company," which Mr. Kamata started from one small room with the help of his wife, is now located in the city of Chofu. The company produces such toiletries as shampoo in the basement of a three-story building, with its office on the first floor, and the living quarters for his eldest son's family upstairs.

At his interview with the Chugoku Shimbun, Mr. Kamata first asked about old schoolmates living in Hiroshima who had also responded to the survey. Then, the words pouring from him, he said, "I'm amazed I was able to live this long. Whenever I suffered serious illness or debt, I held on, telling myself not to give up. Because I kept up my efforts, others came to lend helping hands."

Mr. Kamata is from Kamikamagari Island in the Seto Inland Sea. He commuted to Hiroshima First Middle School from a house that he rented with his older sister who was working in Hiroshima. However, he was mobilized to work at Toyo Kogyo Kaisha, Ltd. (now, Mazda Motor Corporation), making pistons for aircraft from the fall of his second year.

On August 6, Mr. Kamata was part of a group of third-year students who went to the west end of the Tsurumi Bridge to help dismantle houses to create a fire lane in the event of air raids. The atomic bomb expoded while he was at that location. His parents searched for him and found him at the Army Quarantine Station on Ninoshima Island in Hiroshima Bay. They then brought him home.

A doctor came to tend to him, but pus continued to form in his wounds and he suffered from persistent diarrhea. At the same time, Mr. Kamata watched his aunt and cousin, among others who returned to Kamikamagari Island from Hiroshima without external injuries, pass away.

In 1948, he moved to Tokyo and entered Hoshi University. His father, who had the experience of emigrating to the United States in his teens, stressed the importance of professional qualifications, and did his utmost to provide his son with financial support. After graduating from Hoshi University, Mr. Kamata began working for a pharmaceutical company. However, in the spring he suffered lethargy due to a medical condition involving a drop in the production of blood cells.

"As Mr. Ito wrote, the effects of radiation exposure were mostly unknown. There was little information about it at the time. So I shrugged off the lethargy, and wondered about the cause." Takeshi Ito was a classmate at Hiroshima First Middle School and he championed relief measures for A-bomb survivors in the 1960s and later, as co-chair of the Japan Confederation of A- and H-bomb Sufferers Organizations, helped lead the effort for the Atomic Bomb Survivors Relief Law, which took effect in 1995. (Mr. Ito died in 2000.)

Mr. Kamata also took part in the Tokyo Federation of A-Bomb Sufferers Organizations (Toyukai), established in 1958, from its inception. He assumed the post of director and made efforts so that the organization could acquire corporate status in 1971.

"Hibakusha who moved to Tokyo became distressed not only by prejudice, but also by indifference," said Mr. Kamata. "As I've had experience establishing a company and familiarity with accounting, I've given a helping hand to the organization." Even after stepping down from an administrative role, he has continued to serve as a supporting member who makes contributions to the organization's funds.

Those who were in their third year at Hiroshima First Middle School at the time and now live in Tokyo get together at least once a year, with nearly 20 schoolmates still gathering. However, they would avoid talking about the atomic bombing with one another, even among old, trusted friends on an overnight stay. Mr. Kamata said that it was not until he was over 70 years old that he began to speak about such things that once stirred hesitation.

"Maybe it's because we have all had a hard time living our lives," said Mr. Kamata. "Come to think of it, I didn't speak personally with Mr. Ito, either, even after our Toyukai meetings..." He spoke in a glum voice, as if talking to himself.