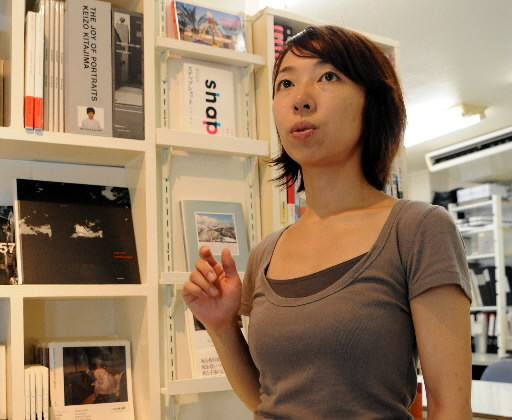 The photo shows a wide, bright sky and a bridge crowded with lines of high school students crossing over it. Judging from the distinctive form of the handrails on the bridge, it is likely Peace Bridge. Another photo of Hiroshima Peace Memorial Park in the evening depicts a person, perhaps a high school girl, heading into the distance. Only her legs are clearly visible. The shadow of what appears to be Peace Memorial Museum rises in the rear.

These photos are included in a series of images portraying Peace Memorial Park and its environs. At first glance, they seem to be ordinary black-and-white photos. However, the shadows are dark and the details of settings and people's faces cannot be seen in many of the images. The hazy quality stirs curious feelings.

"These scenes are a bit strange, aren't they? The city of Hiroshima has a unique feel to it, especially in the Peace Park area," said Keiko Sasaoka, 32. Ten years have passed since Ms. Sasaoka, a photographer, began taking photos of Peace Memorial Park and the park environs. During the day, tourists and groups of students on school trips come and go, while, at night, darkness falls and silence fills the area. Once in a while, Ms. Sasaoka has spontaneously experienced an eerie feeling in connection to the space and the scenery, and continued to take photos during such moods. "This is a photo of high school girls crossing the park to go home in the evening," she explained. "Their retreating forms appear like figures not of the present but of a different time."

Ms. Sasaoka encountered that odd feeling when she left the city of Hiroshima to study photography at a university in Tokyo. At one point she was looking for a location to take photos for a thematic assignment about a park and she noticed: "There's a wide space in the heart of Hiroshima. Wide open and empty. I feel it both geographically and viscerally about Peace Park. It's a space for commemorating that day so the experience won't be forgotten. But people just pass through it. It feels odd and strange."

In a quest to capture that feeling in form, she returns to Hiroshima four or five times a year, for about ten days at a time, to visit Peace Memorial Park with her camera. With a medium format camera, she take photos, from morning to night, of the A-bomb Dome, monuments to the A-bomb victims, rivers, and bridges.

"One day I happened to take a photo that was underexposed," she said, describing the image as blackened and blurred. But she felt something in it. "Normally, a good photo is supposed to present a clear image," she said. "But I don't want to capture every detail in the photos I take." Since then, she has been taking underexposed photos during the daytime as well and has begun using less light for flashes at night.

At the end of 2009, Ms. Sasaoka published a book of her work called "PARK CITY," which contains 100 photos. "I didn't want to use the word Hiroshima in the title, though, as people would have preconceptions and brace themselves for the content," she explained. She also arranged the layout of the book with care. At the beginning appear images which cannot be identified as any particular city. Gradually, photos that show the environs of Peace Memorial Park emerge, and an odd sensation comes over the reader.

"The park was created to console the spirits of the A-bomb victims," Ms. Sasaoka said. "But, little by little, it seems to have diverged from the original impulse." As she continues to take photos of the area, she believes she is beginning to grasp the nature of the peculiar feeling. "Since the atomic bombing, the city of Hiroshima has been reborn in a unique way, including Peace Park," she explained. "I'm not making a judgment here, but there must be many layers of times that have existed before and after that day. In my work, I want to express the park of the present."

Ms. Sasaoka will continue to photograph the area. "I can see Hiroshima from the perspective of someone who has learned about Hiroshima in peace education classes as well as my perspective away from the city," she said. "I want to take photos with a sense of detachment, with both perspectives."

With the memory of the A-bomb experience fading and the memorial services becoming rituals of form, what cannot be clearly seen but remains important for the identity of Hiroshima may be captured by the camera lens.

Keiko Sasaoka
Ms. Sasaoka was born in Asaminami Ward, Hiroshima and graduated from Tokyo Zokei University. In 2001, when she was still a university student, Ms. Sasaoka jointly established the "Photographers' Gallery." In 2008, she was awarded an encouragement prize from the exhibition of the Vision of Contemporary Art. Ms. Sasaoka has held solo exhibitions in Tokyo and Hiroshima, among other locations. In June of this year, she published a book of photographs entitled "EQUIVALENT." She now lives in Suginami Ward, Tokyo.