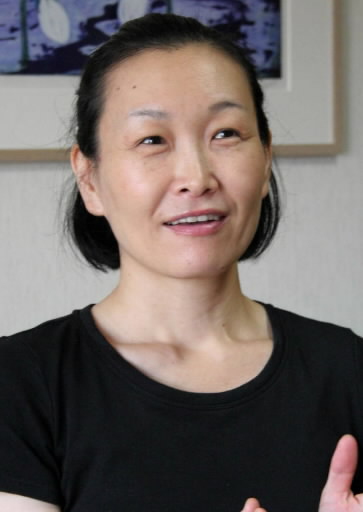 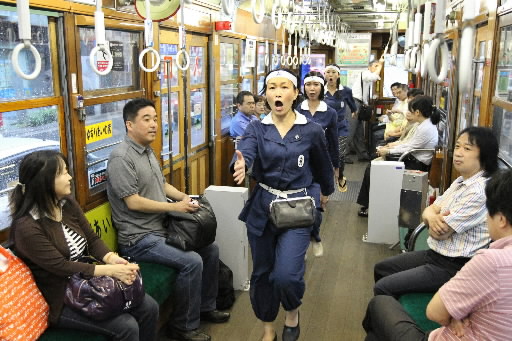 In a rattling streetcar running in the city of Hiroshima, a conductor, portrayed by the actress Yayoi Fujisawa, 43, raised her voice: "Do you have a ticket?" She was wearing a navy blue jacket and work pants with a headband around her head, the outfit of an "imperial girl."

The play "Momo no Mi" ("Peaches"), performed in a hired streetcar with the passengers' seats used as seats for the audience, is set in Hiroshima in the period from 1943 to 1945. It is based on the true story of students at the Home Economics Girls' School of the Hiroshima Electric Railway Company who served as drivers and conductors of streetcars at the end of the war, when Hiroshima faced a shortage of male labor.

The girl students, in order to "defend the home front," worked hard on the streetcars, observing other workers to learn how to perform their duties. The winter cold was tough for their bodies to bear, while a quiet love grew between one girl and her passenger, a boy. Then came the morning of August 6…

Ms. Fujisawa herself was born and raised in Tokyo. The depiction of the atomic bombing, though, is essential to the story. "I was so removed from the incident," she explained. "The more I learned about it, the more I realized the bombing was impossible to portray." Still, after much discussion with her fellow performers, she decided that they had to do it. The moment of the atomic blast was depicted by flapping a long piece of black cloth that covered the inside of the streetcar from end to end.

The play was performed along the roughly one-hour round trip between the headquarters of the Hiroshima Electric Railway Company in Naka Ward and Yokogawa Station in Nishi Ward. The title, "Momo no Mi," serves as a symbol of glimmering hope. During the play a girl student exposed to the atomic bombing eats a peach and feels revived, saying, "We are alive."

Including the performances in Hiroshima on July 3 and 4, Ms. Fujisawa staged the play in eight cities this year, among them Tokyo, Osaka, Nagasaki, and Sapporo. The play is one of her most important works, and it has been repeatedly performed since being staged in 2006 for the first time. "When we perform the play, we feel as if we have gone beyond time and space," said Ms. Fujisawa. The performers travel to Hiroshima 65 years ago, taking the audience with them.

Since 2004, Ms. Fujisawa has been engaged in performances on streetcars, which she calls "a short trip of the mind." "Momo no Mi" is the third piece in this effort. Hitoshi Oikawa, 54, Ms. Fujisawa's husband and her partner in leading the theater group, found the book "Chinchin Densha to Jogakusei" ("Tinkling Streetcars and Girl Students"), written by Keiko Horikawa and Nobuyuki Ogasawara, in a book store and decided to write a play based on the book.

Mr. Oikawa and Ms. Fujisawa made a thorough study of the book and deepened their feelings toward Hiroshima. They also interviewed Aiko Suemori, 81, one of the former girl students and a resident of Asakita Ward. Ms. Fujisawa was particularly struck by the fact that Ms. Suemori felt stunned by the outcome of the war, which led to the closing of her school and her return to her hometown. "Ms. Suemori became involved in the war regime before she knew it, experienced the atomic bombing, and lost her school and her job," said Ms. Fujisawa. Imagining her hardships, a question arose: "Is it simply a story of that time, a story already ended?"

In Japan, more than 30,000 people commit suicide each year, troubled by a number of things, including unemployment. In the world, scores of nuclear weapons still cast a threatening shadow. Ms. Fujisawa said, "The same vulnerability that existed in those days lurks in the modern world, too. I hope we can perform the time travel play in such a way as to make people notice that fact." Her desire to stage the play in a running streetcar stems not only from the streetcar in the original story, but also to suit the play's intent. As someone who had little connection with Hiroshima, she has found the courage to take on the challenge of expressing Hiroshima in her own way.

The name of her theater group, "MOKELE MBEMBE," comes from a creature said to be living in a lake in central Africa. MOKELE MBEMBE, which she explained means "one who appears with a rainbow," is the mascot of the group, which stages its plays in unusual locations, such as trains and public baths.

Ms. Fujisawa is also developing a play on the theme of Nagasaki. "When the play is ready, I want to perform it in Hiroshima, too," she said. "Our theater group will continue appearing in unexpected places."

Yayoi Fujisawa
Ms. Fujisawa was born in Tokyo and continues to live there. After graduating from high school, she joined the Black Tent Theatre, known for its performances on the road. After four years with this theater group, she married Hitoshi Oikawa, another member of the group, and the pair left to launch the "MOKELE MBEMBE PROJECT" in 1990. They have continued their theater work under this banner, recruiting performers for each new project.