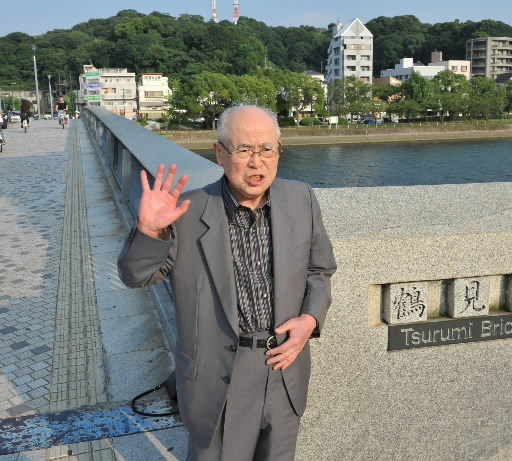 
Starting point for writing about life

"Sure, no trouble at all," responded Shiro Nakayama, 79, cheerfully. After having his photo taken at the Tsurumi Bridge, Mr. Nakayama, a writer, cast his eyes on a row of houses that extended along the Kyobashi River, reflecting the midsummer sunlight. Hiroshima is Mr. Nakayama's hometown.

Mr. Nakayama wrote an essay entitled "Hashi" ("Bridge"), included in the book "Genbakutei Orifushi" ("A-bomb Reflections") which was published in 1993 and won the Nihon Essayist Club Prize. A portion of the essay reads: "I experienced the atomic bombing at the western end of Tsurumi Bridge. Though I dropped into the river and plunged my burned body under the water to cool it, in order to flee to the opposite bank, I climbed out and crossed the bridge. Due to a crush of wounded on the bridge, it creaked as if it would soon collapse. The creaking sound lingers deep in my ears…"

Mr. Nakayama was a third-year student at Hiroshima First Middle School at the time of the bombing. Looking back on those days, he said that even though he escaped death to live through the post-war period, he thought "only of dying."

In his first book "Shi no Kage" ("The Shadow of Death"), which was published in 1968, Mr. Nakayama described his feelings at the time through a boy named Kazuo, who is stared at with curiosity in the city of Hiroshima, which had begun to leap back to life:

"I wished that everyone's face was covered with keloid scars, and I couldn't help but curse those who helped me survive…" Kazuo is stripped to the waist and photographed in front of a U.S. soldier who came to the school to conduct "research." Mr. Nakayama, in fact, experienced the same situation.

After graduating from Hiroshima First Middle School, Mr. Nakayama attended the School of Letters, Arts, and Sciences at Waseda University in Tokyo and aspired to become a writer. His short story "Shi no Kage," which he wrote at the age of 37, was carried in the literary journal "Bungakusha," a publication overseen by Fumio Niwa and edited by Akira Yoshimura. A collection of his short stories was eventually published.

Mr. Nakayama's writings based on his A-bomb experience have received favorable reviews since that time, but "atomic bomb literature," which tends to be considered bleak and heavy, has difficulty attracting mainstream magazines for publication. Though Mr. Nakayama was asked to write on other subjects, he was not willing to depart from his theme of the atomic bombing. This is because, he explained, "War is merciless in dividing life and death, and writing about the atomic bombing, the symbol of war, is living for me."

Mr. Nakayama brought his parents to Tokyo and cared for them until their deaths, while continuing to work for a company. He retired from the company at the age of 61 and took that opportunity to move to the city of Beppu in Oita Prefecture. Following "Genbaku Orifushi," he wrote "Watashi no Hiroshima Chizu" ("My Map of Hiroshima"), which was published in 1998.

Mr. Nakayama moved to a warmer climate in order to repay his wife for her forbearance in understanding his creative activities and accepting his decision not to have children. He made this decision at the age of 26, when they married, "in consideration of the risk of genetic effects as a consequence of the atomic bombing." His wife Tokiko, who was a repatriate from China and 14 years older than Mr. Nakayama, passed away nine years ago.

At a hotel south of Hiroshima Peace Memorial Park, Mr. Nakayama calmly asked: "Can we really say that we've been seeing off the dead?" Mr. Nakayama was born in his mother's house in the Nakajima district in Naka Ward, near the hotel.

"What thoughts have the bereaved families held in their minds through the years since then? The war and the atomic bombing completely transformed people's lives. The survivors will bear the scars until they die." He says that he wants to write about the scars of the war and the atomic bombing that underlie daily life, avoiding the sentimental. The Tsurumi Bridge is where Mr. Nakayama reflects on his writing and living.

His old schoolmates in the third year of Hiroshima First Middle School who have declined to appear in the newspaper on this occasion also remain burdened by the war and the bombing. They have endured through the past 65 years with traumas unhealed. The "post-war period" is not yet over.