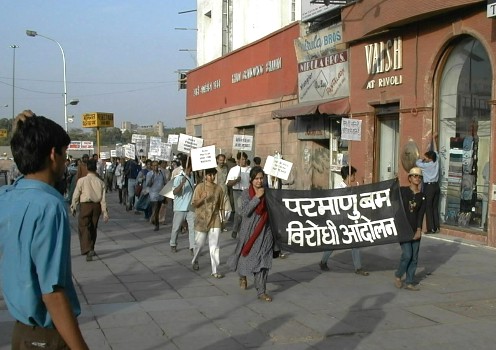 This look back at an A-bomb survivor's travels in India and Pakistan was originally published in July 1998.

At 5:30 p.m. on June 12, more than 40 men and women in T-shirts and jeans began to march in a demonstration in the center of New Delhi, India, where shops stand side by side. Passersby watched the demonstration in amazement.

The participants in the march held a black-colored banner on which the Hindi words meaning "Campaign Against Nuclear Weapons" were written in white. After the participants walked for about 50 meters, they scattered along the fence on the median strip and stood in a line at even intervals. Car exhaust and dust were stirred in the air around them. They held up signs with such messages as "Remember Hiroshima," and remained on their feet, without a word, for nearly an hour.

The first march was staged on May 16. Teachers, members of labor unions, and artists, among others, who felt a heightened sense of urgency in the face of the nation's nuclear tests conducted on May 11 and 13, called on one another to gather for the demonstration. Since then, they have continued to organize a march every Friday.

G.N. Saibaba, 30, is the secretary general of the "All India Peoples Resistance Forum" (AIPRF), which has played the key organizing role in the marches. Mr. Saibaba, holding a sign on a motorbike at the end of the road, gazed at his fellow demonstrators standing along the fence.

"These nuclear tests were intended to show off the nation's power to neighboring countries as well as divert public attention from domestic issues, including poverty," he said. "I can never support such an administration."

When Mr. Saibaba was working as a college professor in Hyderabad in central India, he took on the role of mediator for labor disputes involving farm villages and factories. He saw the reality of people being forced to perform hard work at low wages, which led him to resign from the college last year. Mr. Saibaba now devotes himself to AIPRF, which was established in 1992 in order to protect the rights of workers.

"We will be successful in holding peace meetings in New Delhi, Mumbai, and other places on Hiroshima Day on August 6 of this year." These heartening words emerged from Mr. Saibaba's mouth behind the mustache and beard that covered the lower half of his face.

A letter that asked for cooperation in holding an A-bomb exhibition arrived at the Hiroshima Congress Against A- and H-bombs earlier this month. This group is the organizer of the peace journey to India and Pakistan. The letter came from a peace-related organization in the city of Madurai in southern India, a place where Yasuhiko Taketa, an A-bomb survivor, did not hold a peace meeting during his travels.

Sheba Chhachhi, 39, a photographer who took photos of the peace journey in New Delhi, is also planning to hold an exhibition of his pictures. "Most people in India don't know the effect of radiation," he explained.

The "Pakistan-India People's Forum for Peace and Democracy" is an organization located in Pakistan and India. Even in the face of violent interference by a group of Islamic fundamentalists, the Pakistani members have not backed down and have continued to hold meetings for Pakistani and Indian citizens. The organization also served as a host for the peace journey effort.

In India, some people have expressed opposition to the Indian and Pakistani governments, both of which justify their nuclear tests, and a new wave of antinuclear activity has been emerging. In Pakistan, the peace movement is pursued by some at a more private level. Yet in both nations, the public knows little about the damage wrought by radiation.

Mr. Taketa looked back on his peace journey of 12 days.

"I'm afraid that the Japanese government and the A-bombed cities have neglected their obligation to convey the horror of nuclear weapons to the world. The peace movement in the A-bombed nation of Japan lacks enthusiasm. Is this okay? From our peace journey, we have learned many important things."