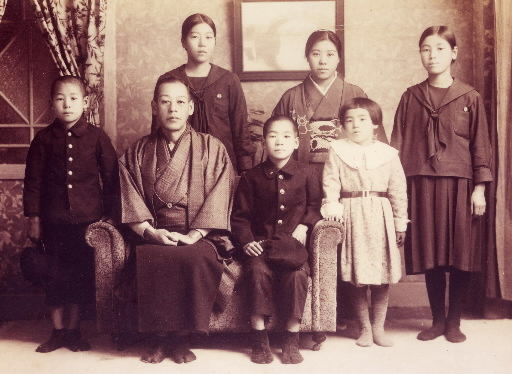 In 1925, Hiromi Misho was born in the city of Iwakuni, the third son of his father Kichibei and his mother Fumi. He was the second youngest of their eight children.

My father was a silk maker and it seems he was rather well off. I have a vague memory of going to his shop in the Kawashimo district in Iwakuni in our car. A private car in those days was a rarity. But his shop was forced to close, hit by the severe depression caused by the repeal of the gold embargo in 1930. From that point, we became mired in poverty.

Despite this poverty, his parents gave their children a sound education.

My family had a lot of ups and downs, but my mother remained focused on our education. My oldest sister graduated from a women's college in Tokyo when we were still well-off. Even after we fell into poverty, my older sisters went to Iwakuni Girls' High School (now, Iwakuni Senior High School) with my mother's belief that "We have to give our children a good education, even if we have to strain ourselves to do it."

When I graduated from elementary school, my father told me: "We don't have the money, so we can't let you take the entrance examination for middle school." So I went on to a "higher elementary school" instead. Afterward, he managed to gather enough money to cover the costs of middle school and, delayed a year, I then entered the former Iwakuni Middle School (now, Iwakuni Senior High School).

As I had many older sisters and brothers, there were books that they had read on our bookshelves at home. I remember that "Les Thibault" left me with a deep impression when I was in the fifth grade in elementary school. The book was full of symbols and blanks standing for unprintable words at that time. In retrospect, precocious as I was, the encounter may have stirred my interest in literature. I even hoped to take up something related to literature as a career when I graduated from high school under the old system of education.

Meanwhile, Dr. Misho lost his mother when he was seven years old.

My mother died from tetanus. It was almost impossible to obtain the serum to treat it. I heard that when my father went to Hiroshima to get it, it was too late. One of my older sisters told me later that my father was tapping my mother's cremation urn with a ruler and crying, "Why did you die so soon?" My father remained a widower after that, and I think he underwent some hard times.

I hardly have any memories of my mother. I only remember that when I was in first grade in elementary school, she gave my brother and I--he was two years older than me--a severe scolding. I don't remember the reason, but she ordered us to sit on our heels on the open veranda for a long time.

My mother was originally from the Misho area in the city of Iwakuni. As I dimly remember my mother taking me there, inside me I strongly associate Misho with my mother. Due to this longing for my mother, I chose the name "Misho" for my pen name.