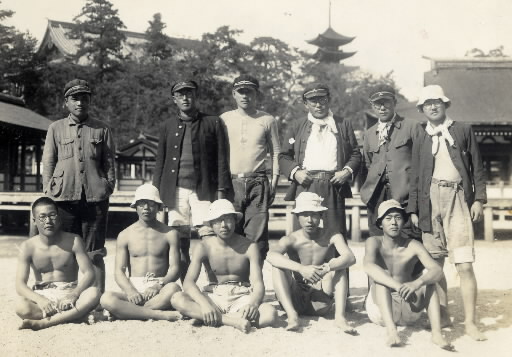 In 1943, Hiromi Misho entered the former Hiroshima High School (now, Hiroshima University) in the city of Hiroshima. [In this context, "high school" in fact refers to a college-level institution.]

I had had no confidence in my physical strength since I was a small boy. "I have to build up my body," I thought, and so I wanted to join the rowing club at the former Hiroshima High School. I went to see the captain and I sought to be admitted to the club. Everyone steered clear of the rowing club, as it was infamous for its tough training. The captain was surprised and said to me: "You're the first one who ever asked to join this club."

The training was brutal. Rowing a boat on the water was better. I found it hard to endure the training that had us sitting and exercising inside a wooden box to strengthen our abdominal muscles. I weigh less than 50 kilograms now, but I weighed more than 70 kilograms back then.

The boat races held by the former high schools used six-man crews. The seats were fixed in the boat and, though we sat on thin cushions, the skin of our rears was rubbed raw in each training session. Afterwards, an older student would have us drop our pants and he applied iodine to our skin.

We would row through the great gate of Itsukushima Shrine when the tide was in, and relax at the vermilion-lacquered shrine. Miyajima Island was like our private garden.

We also rowed as far as Iwakuni in Yamaguchi Prefecture. The water in early spring was cold and the north wind blew. When the wind became strong and white-crested waves appeared, we said that "white rabbits are jumping." Boats for races were easily affected by wind gusting from the side. With waves wresting control of our oars, we scooped water out of the boat that the waves had brought in and, frozen with cold, we continued rowing. I was worried that we would sink. By the time we reached the Imazu River, I was worn out.

Due to the escalating war, graduation from the former high school was speeded up. As a result, Dr. Misho spent only two years in high school.

Though Japan had already plunged itself into the war when I entered the former Hiroshima High School, there was still an atmosphere of freedom at the school. I even once stood on a platform in the classroom and gave a speech in which I said that "Japan will lose the war." I was then subjected to harsh criticism from my classmates who told me, "You're a disgrace!"

On days that I wasn't out rowing, I talked about life with my fellow students in the dormitory, I went to a movie theater that showed foreign films, and I hung out in the area that is now Peace Memorial Park. I also took walks on Hijiyama Hill, taking a soiled towel with me and singing the dormitory song.

My life in high school lasted only two years. But it was a defining time for me as a human being. The friendships that I cultivated at the time remain deep in my heart. Because of that time, Hiroshima became my second hometown.