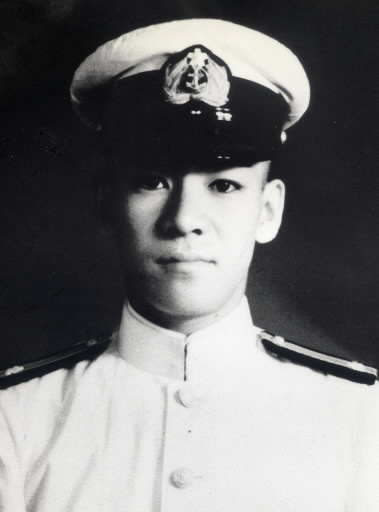 I remember the news of war breaking out all too well. I had finished up my studying for that morning when the radio began blaring martial music. Then came a special broadcast announcing that Japan had gone to war before dawn. I was in junior high at the time and I didn't like military training and I avoided it, but I was a boy with an eager military spirit. The news of war sent a shiver of excitement down my spine.

I went downstairs from the second floor and, in that state of excitement, said to my father: "Japan has finally gone to war." He was reading the newspaper and he muttered, "We'll lose this war." As no adults would say such a thing at that time, I remember being shocked by his words.

I think my father had an understanding of international conditions, including the difference in strength among the nations, as a result of the hardships he experienced in the aftermath of the depression when he lost his silk making business and became bankrupt. At the time, everyone must have flushed with excitement and determination at the news that war had broken out. But my father dashed cold water on me and dampened my early enthusiasm. After that, the war didn't sit well with me.

Noriyoshi Maruya, Hiromi's second elder brother, two years older than Hiromi, entered the navy. In February 1945, when Noriyoshi was in command of a convoy of transport ships, he was killed in torpedo attacks near the Philippines.

My older brother, Noriyoshi, went to Tokyo Nautical College (now, Tokyo University of Marine Science and Technology), but he spat up blood in the early summer of 1943. He returned to Iwakuni for a while for medical treatment. Because of the war, he graduated early, and landed a job before his graduation, but a draft notice then arrived.

I told Noriyoshi not to respond to the call: "Get a doctor's certificate and you can avoid the draft. You're under treatment for tuberculosis." But he responded: "All my classmates have gone to war. I can't be the only one not to go."

The last time I saw Noriyoshi was at the end of 1944, when he returned home. As we were close in age, we often quarreled. But I was proud of him, he was a great guy, and I wanted to be like him, too.

The official announcement of Noriyoshi's death in the war came when I was about to graduate from the former Hiroshima High School (now, Hiroshima University) and I had to make a decision about higher education. My father must have taken the death of my brother hard, after placing hopes on him. He said to me, as if murmuring to himself: "Hiroshi, please don't become a soldier--at least you have to survive." While the deferment for university students was suspended, students in medical departments could still elude the draft. So I began my study of medicine and became a doctor.