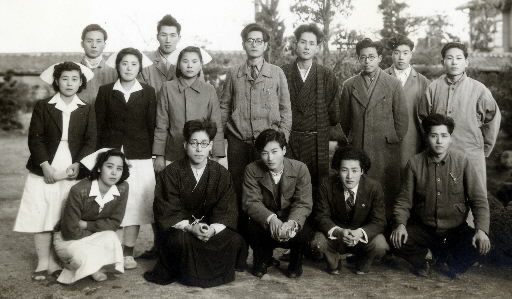 When I was a junior at Okayama Medical College (now, Okayama University), I vomited a great deal of blood, a washbasin full, all of a sudden at my lodgings. I was immediately admitted to the hospital affiliated to the school. Though I continued to vomit blood and had a fever as high as 40 degrees Celsius, my college friend provided a blood transfusion and I barely managed to survive. I couldn't move at all for two months. When I got up, the mat under the futon was rotten due to my fever and sweat.

Dr. Misho was suffering from tuberculosis. In the fall of 1947, he returned to his hometown, Iwakuni, and encountered poetry while under medical treatment at the National Iwakuni Hospital (now, National Hospital Organization Iwakuni Clinical Center).

As my physical strength was depleted, it was hard for me to read long texts. So I gravitated naturally to poetry and I became captivated by the writing of Chuya Nakahara. I felt an affinity with the fragility and freshness and transparency of life that he depicted in his poems. It may be because I myself was spitting up blood and undergoing treatment, brushing up against death each day.

I thought of trying to write a poem myself. Not rhythmical poetry like Chuya Nakahara, but prose poems. As I was suffering from a severe case of tuberculosis and staying in a private room, I got up day and night whenever I felt like it, and wrote down whatever came to my mind in a notebook. At the time, it didn't appear that I would live a long life. My desire to "write something down" led me to compose poetry.

For my first poem, I borrowed the title of a poem by Nakahara called "Momoku no Aki," or "A Blind Man's Autumn." It's a sentimental poem about such subjects as the atomic bombing and my older brother who was killed in the war. I sent the poem to the New Starlet Award Contest of Poetry by the New Japanese Literature Association and became one of the finalists. Though I didn't ultimately win, the experience gave me good confidence.

Dr. Misho set up a poetry group in the hospital to pursue his new passion.

In those days, tuberculosis was a national affliction and there were sanatoriums for the disease across Japan. Each sanatorium had a patients' association devoted to cultural activities. As there was no poetry group at the National Iwakuni Hospital, I set one up. In addition to patients, nurses joined the group, too.

When my symptoms of the disease subsided, I went to Hiroshima after a long absence. I think it was maybe April or May of 1949. When I entered "MUSICA," a cafe in front of Hiroshima station, I found that some copies of "Chikaku" ("Earth's Core"), a poetry magazine of the Hiroshima Poets' Association, happened to be sitting on a shelf. The poet Sankichi Toge was the editor of the magazine. As I wanted to meet him, I sent him a postcard when I returned to Iwakuni.