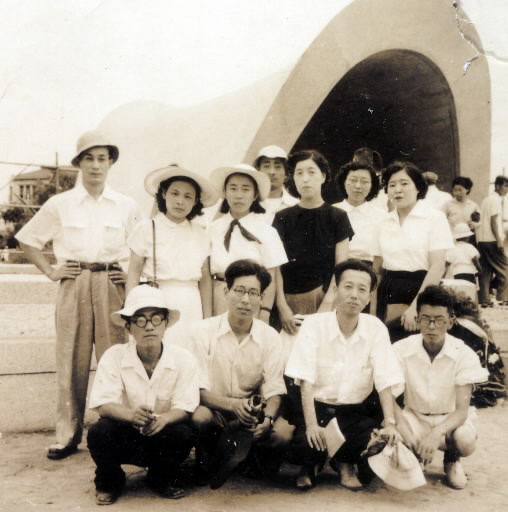 
Exchanging views on poetics and taking steps together
Dr. Hiromi Misho met poet Sankichi Toge (1917-1953) in the early summer of 1949.

Mr. Toge was eight years older than me. He had a feminine quality, like a kind, older sister. He told me that he, too, spit up blood quite often. Maybe because we were fellow sufferers, and we could sympathize with one another, we opened up to each other right away.

When I met him for the second time, I went to the Peace Apartment in downtown Hiroshima, where he lived. Though his speaking style was bold and progressive, a sugary love poem was hanging on the wall. I remember I was a bit surprised to see it. The poem was probably a relic of his days when he wrote romantic poetry.

At the time, Mr. Toge's poetry was read aloud at a labor dispute that was transpiring at the Japan Steel Works in Hiroshima, and his sentiments received cheers from the working-class people. He told me with enthusiasm: "I'm thinking of mobilizing young poets and initiating a campaign for new poetry."

In November of that year, he started a coterie magazine called "Warera no Uta," or "Our Poems." I also turned the poetry group at the National Iwakuni Hospital into the Iwakuni branch of the magazine, and began to work with Mr. Toge. Tomoe Yamashiro (1912-2004), Mr. Toge, and I once held a three-cornered talk in the magazine.

As young poets, they held discussions about composing poetry.

Mr. Toge repeatedly said, "We have to change both ourselves and our poetry." We discussed a variety of subjects, including, "What sort of spirit must we have in order to write poetry about struggle?" and "What kind of poetry is needed in the world today?" Mr. Toge was basically a lyric poet. He felt frustration, though, trying to shake himself free from his own lyricism. I also began to write an epic poem about Iwakuni. Seeking to be known as one of the avant-garde poets, I put my heart and soul into writing prose poetry.

On my way back to Okayama, to return to college, I stopped by Mr. Toge's apartment. Copies of "Genbaku Shishu" were stacked in the room and I could smell the odor of ink. "They were finally finished the day before yesterday," he said, looking very happy.

Mr. Toge inscribed the words "The wind rises / We must seek to live" in the copy of "Genbaku Shishu" that he gave to me. These words did not fit the tone of the book, though. As someone who was also suffering from lung disease, he chose those words for me, sharing with me the sentiment "to live." They were words typical of the romantic Toge, and I very much appreciated them.

Just prior to that, I had been arrested because of a poem I had written, and it was Mr. Toge who vigorously came to my defense.