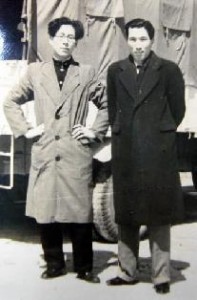 
Poem stirs suspicion of violating U.S. ordinance
It was early in the morning. Three police officers came while I was still sleeping. They unfolded an arrest warrant and told me: "Your poem violates a U.S. ordinance. You, the author, are under arrest, and so is the person who published it."

I asked them to leave my hospital room, so I could change my clothes. I then looked out the window and found that a police squad had completely surrounded the hospital ward. I prepared myself, thinking, "I can't escape from this situation."

In March 1951, amid the Korean War, Dr. Hiromi Misho was arrested on suspicion of violating U.S. Ordinance No. 325 (Ordinance on Obstructive Deeds against the Occupation Army) with a poem that he had contributed to the newsletter of the patients' association of the National Iwakuni Hospital (now, National Hospital Organization Iwakuni Clinical Center).

The patients' association had asked me to write an anti-war poem for the New Year's issue of the newsletter. I wrote a propaganda poem, which I wasn't good at. The poem was given a great deal of space and printed on the front page of the newsletter. I heard that copies of the newsletter were handed out openly in front of Iwakuni station. I have to say that I felt uneasy about it and I wondered if it was all right. I thought I might be admonished, but I never imagined that the police would come to arrest me.

"Hey / Don't fly about with such blue eyes / Aircraft bugs / Soon, by my iron arms / I'll knock you down!" These are lines from the poem "Ushinawareta Ude ni: Ichishohei no Memo yori" ("To a Lost Arm, from the Memo of a Wounded Soldier"), which triggered the incident.

During the investigation, the investigators pressed me for an answer. They said, "An 'aircraft bug' must be a U.S. aircraft, isn't that right?" But I insisted, "No, there's actually a kind of insect called an 'aircraft bug.'" This exchange was repeated throughout the investigation. Though they did not resort to violence directly, they threatened me by hitting the desk with a bamboo pole and saying, "There is no such insect. Tell us the truth." For me, there was no other course but to maintain that an "aircraft bug" was a real insect.

It was Sankichi Toge who came to my defense. He wrote in the editor's note of the coterie magazine "Warera no Uta" ("Our Poems"), which he edited, and other places that "Our poetry comrade, Misho, is now facing a fight." In the end, the case against me was dropped that July.

Sankichi Toge passed away in 1953 during lung surgery.

Mr. Toge, who was planning to write an epic poem about Hiroshima, wanted to regain his health and he was consulting with everyone about whether he should have an operation. I was one of those who recommended he undergo surgery. I still feel guilty about it and I think: "I did him wrong."

While I was active with Mr. Toge and others, I was also involved in interactions with avant-garde poets in Tokyo by, for instance, participating in the effort to start the poetry magazine "Retto" ("Archipelago") and contributing my work to it. During the postwar period, when there was a renaissance of literature, everyone was energetic. I don't think any other time in Japan has been marked by such passion over literature.