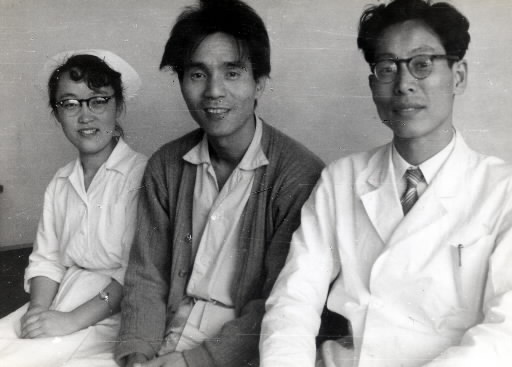 
Leaving Okayama, becoming a doctor in Tokyo
While I was at a hospital affiliated with Okayama Medical College (now, Okayama University Hospital) in an internship program, I was short of money. So I asked my friends for information about a part-time job at the hospital, working as a doctor on the nightshift. However, after going to work several times, I was told: "Your services aren't needed anymore." I was wondering what the problem was when a professor called me and said: "If you don't change your ways, you'll have to leave this university." At the time, I was involved in the student movement, including the literature movement and relief efforts for natural disasters. I guess I was blackballed because of this; my work opportunities dried up. As I could not abandon such attitudes, I had no choice but to leave Okayama.

In April 1954, after the National Medical Practitioners Qualifying Examination, Dr. Misho left for Tokyo. He began working as a physician at Yoyogi Hospital in Shibuya Ward, Tokyo.

I quickly stood out after taking up my post. One day, a patient who looked exhausted came to the hospital and said that he hadn't eaten breakfast and he didn't have train fare, either. After I handed him some money and saw him off, I was scolded by a veteran nurse. She told me, "He just wanted to cheat you out of your money. You had no skepticism. You're so naïve." I was young then and I replied: "I'd rather get cheated than see people with that sort of skepticism."

When it came to examining patients, my experience in Hiroshima was helpful to me. I remember one man who came to the hospital complaining of fatigue, among other symptoms. He said that he often felt ill and had to be absent from work. As a result, he would get fired and so had difficulty keeping a regular job. But nothing abnormal had been detected in previous medical examinations. No matter how many times he went to the hospital, the results were always the same. He nearly gave up consulting with doctors about his condition.

I listened to him carefully and learned that he had been exposed to the atomic bombing in Hiroshima. I told him: "It may be because of the bombing. I'm not sure I can cure you completely, but let's do our best together." My words seemed to lift his spirits. Later, he made efforts to organize a group for A-bomb survivors in Shibuya Ward.

Dr. Misho also served as a physician for Jukichi Uno, a well-known actor, and Yoshi Hijikata, a producer.

Mr. Uno, who had complained of insomnia and a poor appetite, was hospitalized for medical tests. After that, he often called me from a rehearsal space, saying, "I'm tired. Please give me a shot." So I would go and see him. Mr. Hijikata suffered from lung cancer, which was rare in those days. His wife came to consult with me and said, "Yoshi wants to drink wine." Of course, drinking alcohol in the hospital was prohibited. But I knew he didn't have much time left. When I gave his wife permission to give him wine, she was very grateful to me.

As there was a shortage of doctors in those days, I was always busy. I got married during that time, but my wife now laughs and says she had no husband back then.