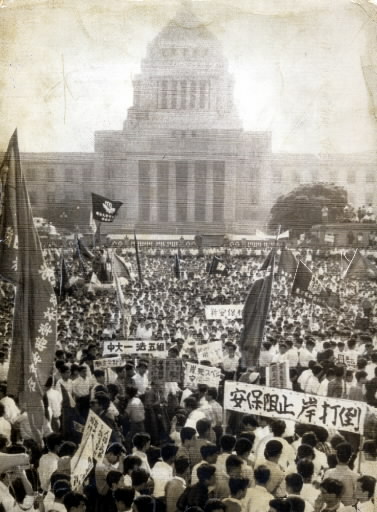 
The truth remains unknown
On June 15, 1960, student demonstrators who opposed the revision of the Japan-U.S. Security Treaty clashed with police. Michiko Kanba, then 22, a student of the University of Tokyo, was killed in the clash.

The day after the demonstration, I was called to the office of the director of the hospital. The deputy director and Akira Sakamoto, an Upper House member of the Japan Socialist Party (now, the Social Democratic Party Japan), said, “Michiko Kanba was killed in the student protest last night.” They attended the official autopsy at the School of Medicine at Keio University and, in a notebook, they recorded in full the observations made by the professor who conducted the autopsy.

Dr. Kusano pronounced that Ms. Kanba had died of suffocation, though he pointed to bleeding in her pancreas that seemed to have been caused by being jabbed in the abdomen with a blunt instrument, like a nightstick, and strangulation marks left by hands on her neck. After I reported the results to Mr. Sakamoto, who was then president of the Relief Organization for Japanese People, he held a news conference about the cause of Ms. Kanba’s death. The Japan Socialist Party accused the Superintendent-General of the Metropolitan Police, among others, of murder, based on this finding.

However, the Tokyo District Public Prosecutor’s Office announced that the cause of Ms. Kanba’s death was “suffocation caused by pressure on the chest and abdomen due to a surging crowd.”

It seems that the professor at Keio University submitted a written statement with almost the same view as our opinion. I heard from a doctor, an assistant at the autopsy, that the prosecutor’s office did not accept the statement and pressed the doctor to rewrite it. Afterward, the prosecutor’s office asked the University of Tokyo to reexamine the findings. A professor at the University of Tokyo submitted a written statement identifying the cause of Ms. Kanba’s death as “suffocation due to a surging crowd.” The professor seemed to suggest that the bleeding in her pancreas was also a result of her death from suffocation.

Mr. Sakamoto apparently saw the University of Tokyo professor, who observed the autopsy, make a motion as if poking something with a stick, when the professor had a look at the bleeding in the girl’s pancreas. Mr. Sakamoto was furious with the cover-up and said that he would provide an article about the real cause of Ms. Kanba’s death to the Asahi Journal. But he told me, “Because of the Diet, I have no time, so you write it for me,” and he had me stay the night in the Diet members’ residence and write the article.

This year, 50 years after the incident, Dr. Misho was able to hear new testimony on the case.

For a long time, the location where Ms. Kanba was standing that evening remained a mystery. This past April, though, I was able to meet a woman who took part in the protest with Ms. Kanba. She told me that Ms. Kanba was swept to the front of the demonstrators as they clashed with the riot police. She was then jabbed in the abdomen and chest with nightsticks, beaten on the head, and feeling groggy, was brought to the hospital by ambulance. The woman said that Ms. Kanba was in the line right in front of her. With this information, I was able to resolve a riddle that had lingered for many years. When an avalanche of people occurs during a demonstration, it’s likely to happen at the rear, not the front.

The written statement on the cause of Ms. Kanba’s death still hasn’t been released. Even now, the wily cover-up and fabrication by the authorities gives me chills.