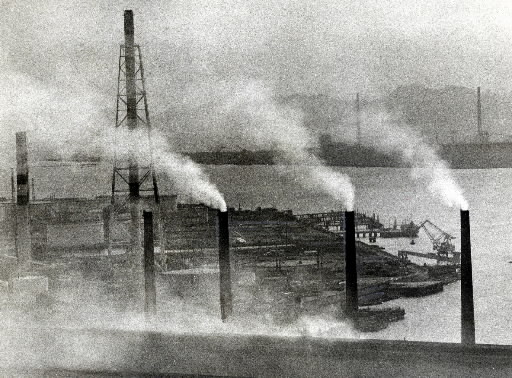 
Examining asthma patients in Mizushima
In 1963, I left Yoyogi Hospital in Shibuya Ward, Tokyo, where I had worked for about nine years. As a quarantine officer of the Ministry of Health and Welfare (now, the Ministry of Health, Labor, and Welfare), I then took up a post as head of the Mizushima Branch of the Hiroshima Quarantine Station, located in the city of Kurashiki, Okayama Prefecture.

The year before, my second child died soon after birth and I became an emotional wreck. I felt like leaving Tokyo for a while. A professor at Okayama University then invited me to assume the new post. I planned to go back to Tokyo in about a year, but I nevertheless devoted myself to the problem of pollution.

Mizushima had few factories at the time, and foreign ships arrived in the port only once every two or three days. In my free time, I helped out at Mizushima Kyodo Hospital in the city of Kurashiki. I examined patients with respiratory diseases. The “Yokkaichi asthma” had already become an issue in Yokkaichi City in Mie Prefecture, and so I kept a keen eye on Mizushima, wondering how things would unfold there. In that area, too, patients with asthma, among other diseases, began to increase noticeably.

As the number of factories increased, I became busier with my quarantine work. I found it hard to perform both jobs at the same time. Since I preferred seeing patients, I chose to work at the hospital.

I asked the people who were visiting the hospital due to asthma and other symptoms to describe when their symptoms began. I found that these patients, sometimes roughly up to ten patients, developed their symptoms on the same days. I later inquired about the measurements of air pollution with the city, and I learned that high levels of sulfurous acid gas had been recorded for the very period of those few days. This is how I conducted research, little by little, on the correlation between air pollution and disease.

I compiled these results and published the book “Kogai ni Idomu” (“Challenge to Pollution”) in 1970. As pollution had become a subject of discussion at the time, the book sold well, reaching its sixth edition. The book was also used as reference material for a subsequent lawsuit over pollution in Kurashiki.

In those days, the public had little knowledge of pollution. I would visit meeting halls here and there, carrying slides with me. I held study sessions on pollution more than 100 times. I also worked on organizing the patients, and the “Kurashiki City Group on Pollution Diseases” was established in 1972. I even testified as a witness at the Lower House special committee on pollution in the run-up to the enactment of the Pollution-Related Health Damage Compensation Law. I was literally running about everywhere.

The Pollution-Related Health Damage Compensation Law went into effect in 1974. The next year, the Mizushima district was defined as one of the designated areas under the law.

I served as a member of the screening committee that certified pollution disease patients. The screening for certification bred troubles between patients whose applications had been rejected and their doctors in various locations in Japan. In Mizushima, when certification was withheld, we first informed the doctors of the decision and urged them to fully discuss the matter with their patients.

About the time this screening process for certification began to get on the right track, I received a request to take up the position of director at a new hospital to be built in Hiroshima.