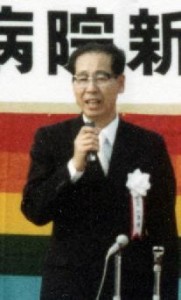 
Study on genetic effects of the atomic bombing
Dr. Hiromi Misho assumed the position of director of Hiroshima Kyoritsu Hospital, under the auspices of the Hiroshima Medical Cooperative Society, in 1977.

For a couple of years, I was courted to take up the post of director at a hospital that was being newly built by the Hiroshima Medical Cooperative Society. The problem of pollution in the city of Kurashiki was weighing on my mind, though, and I was unable to make a decision. It was at this time that Munetoshi Fukagawa, a tanka poet who was then involved in activities to provide support to A-bomb survivors, came to persuade me to accept the offer, along with officials from the Cooperative and others. (Mr. Fukagawa died in 2008 at the age of 87). He said to me: “We worked together with Sankichi Toge on the periodical ‘Warera no Uta’ (‘Our Poems’), right? It’s time you came back to Hiroshima.” So I decided to take on a new effort for A-bomb survivors.

A woman visited Dr. Misho’s office around 1981. Her name was Misao Nagoya. She had lost her second son, whom she gave birth to 15 years after the atomic bombing, due to leukemia. (Ms. Nagoya died in 1986 at the age of 56).

Ms. Nagoya was in tears, pleading with me, “I want you to find medical proof that the atomic bomb killed my child, too.” As the genetic effects of the atomic bombing were also a long-standing concern for me, I began to conduct health checkups of second-generation A-bomb survivors.

However, the work was difficult. I was forced to ask mothers, who had brought their children along with them, such questions as whether their children suffered from any abnormalities or whether they had had a miscarriage in the past. They were reluctant to answer.

Later, the book “Genbakuhoshasen no Jintaieikyo 1992” (“Effects of A-bomb Radiation on the Human Body 1992”) was published. In this book, I found data on the incidence of malformation with regard to second- and third-generation A-bomb survivors in Hiroshima. There were apparently more cases of deformities in spontaneously aborted fetuses who were third-generation A-bomb survivors. Based on this data, I then wrote the article “Genbakuhoshasen no Identekieikyo” (“The Genetic Effects of the A-bomb Radiation”), which was published in 1996 in “Nihon no Kagakusha” (“Journal of Japanese Scientists”) of the Japan Scientists’ Association. Through this work, perhaps I was able to complete part of the assignment I had received from Ms. Nagoya.

Around the time I left Tokyo, men of letters, such as Kobo Abe, were being kicked out of the Japanese Communist Party. To tell the truth, such turmoil made me tired of writing and led me to give it up for a time. While I was in Kurashiki, I wrote only a little and just for the hospital journal. But after returning to Hiroshima, I decided to leave a decent book of poetry behind me, at least one, partly due to Mr. Fukagawa’s encouragement. By publishing my own book of poems, I came to feel inspired to start writing poetry again.