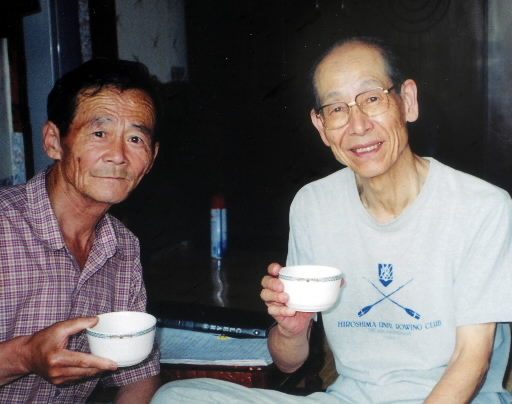 I had questions about the termination of medical treatment in Japan for Korean A-bomb survivors that was conducted under the auspices of the Japanese and Korean governments. As I had already heard about A-bomb survivors in Korea from tanka poet Munetoshi Fukagawa, a fellow member of the circle “Warera no Uta” (“Our Poems”), who put his heart and soul into helping A-bomb survivors residing in Korea, including former conscripted laborers at the Mitsubishi Heavy Industries, I was interested in the issue.

I invited Korean A-bomb survivors who came to Japan for treatment to such events as a New Year’s party or a year-end party organized by the “Association of Atomic Bomb Sufferers” of the Hiroshima Medical Cooperative Society. Most of them came from Hapcheon in Gyeongsangnam-do, which was called “Hiroshima in South Korea.” Our ties led to the establishment of sister group relations between the “Hapcheon branch of the South Korean Atomic Bomb Sufferers Association” and the “Association of Atomic Bomb Sufferers.” For such relations, though, the size of the two groups was disproportionate, with the Korean side much larger. In April 2001, I visited Hapcheon and signed the agreement.

Dr. Misho cannot forget one Korean A-bomb survivor. His name was Sungi Lee, and he died in 2001 at the age of 75.

Mr. Lee was admitted to the Hiroshima Kyoritsu Hospital when he came to Japan for medical treatment in 1996. He was born in Funairi town in Hiroshima and exposed to the atomic bombing in Fujimi town, where he was engaged in the volunteer labor service. After the war, he returned to Hapcheon. In 2000, he was diagnosed with stomach cancer. Though the operation was successful, the metastasis of the cancer was found in his liver the next year. On the day after he was informed of this fact, Mr. Lee, in despair, returned to South Korea without a word to me.

After I learned of his diagnosis, I quickly wrote a long letter to him: “Write about your life to keep up your spirits.” When I later visited Hapcheon to provide encouragement in person, I found that he had already written as many as 80 pages in a large notebook. He was writing the story of his life in fluent Japanese. His writing style was beautiful, like the author of his favorite books, Ryotaro Shiba (a popular Japanese novelist).

“A-bomb disease 56 years after the atomic bombing / The hellfire on August 6 / Now the fire bursts into flame again / You, your life foreshortened / Write about your life / From the days of the atomic bombing of Hiroshima.” (Source: “Genkyo,” or “Homeland,” by Hiromi Misho)

I included his memoir in the book “Hikisakarenagara Watashitachi wa Kaita” (“Torn Apart, We Wrote”), which was issued by the publisher Nishida Shoten in 2006. His story is deeply affecting, and conveys his fond feelings for Hiroshima. When he was alive, he gathered acorns in Hiroshima Peace Memorial Park and brought them back to Hapcheon to grow. The trees are now rising tall on the grounds of the “Hapcheon Welfare Center for Atomic Bomb Survivors,” where A-bomb survivors reside.

The members of Mr. Lee’s family now call me “Grandfather in Hiroshima.” It has been 100 years since Japan’s annexation of Korea. I believe that Japan and South Korea can realize co-existence and co-prosperity by deepening our human ties, as Mr. Lee’s family and I have done.