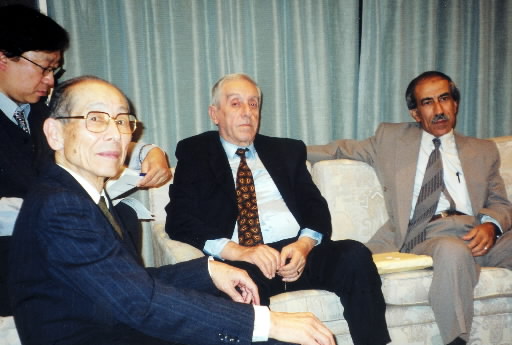 
Shuddering at the dreadful reality in Iraq
In 2002, Dr. Misho met with two Iraqi doctors who visited Hiroshima, and learned about the damage caused by depleted uranium munitions that had been used by the United States in the Gulf War.

The two doctors hoped to “meet a doctor who experienced the atomic bombing and now examines A-bomb survivors.” They explained the damage caused by depleted uranium munitions, showing me photos of patients in Iraq who had large tumors in their abdomens, necks, and other regions.

I thought I had become familiar with depleted uranium munitions to some extent through the series of articles published in the Chugoku Shimbun, among other sources. I thought that the damage was induced by the dual contamination of heavy metal and radiation emitted from the depleted uranium. But the Iraqi doctors told me, “No, it isn’t. The radiation itself is different.”

They said that the radiation people were exposed to in Hiroshima consisted of gamma rays emitted from the atomic bomb exploding high in the air. In Iraq, though, people experienced internal exposure to radiation due to alpha rays. When depleted uranium munitions pierce the armor of tanks, frictional heat causes them to melt and alter into vapor. By inhaling the vapor, people take particles of depleted uranium into their bodies and are exposed to radiation. I had been involved in a variety of research, but I still saw the damage of depleted uranium munitions as simply damage caused by “radiation.” So I was shocked to learn the deeper truth.

It is said that the number of patients with lung cancer and breast cancer, which began to increase in Hiroshima 20 years after the atomic bombing, began to increase in Iraq five years after the Gulf War. The doctors said that a 12-year-old girl developed breast cancer and asked me whether I had ever seen such a patient. I was struck by the horror of internal exposure to radiation as a result of alpha rays.

The two doctors told me that only the voices of A-bomb survivors in Hiroshima could stop the U.S. attacks against Iraq. However, we were unable to prevent the outbreak of the war. So, as a doctor in the A-bombed city of Hiroshima, I began frantically writing poems in order to speak out about what I had learned from the Iraqi doctors.

I was also set to contribute an article on the problems of depleted uranium munitions to a nationwide newspaper. Though word came that the article would be published “as is,” it was not printed. The incident angered me and I wonder if the decision not to run the article was made out of consideration for the United States.

Living things are equipped with mechanisms engaged in constant efforts to restore normality so that the species can be preserved. Nuclear weapons impact these normalizing mechanisms in various ways, including through genes. The United States won’t admit it, but I believe, without a doubt, that depleted uranium munitions are nuclear weapons. I can’t bear these weapons.