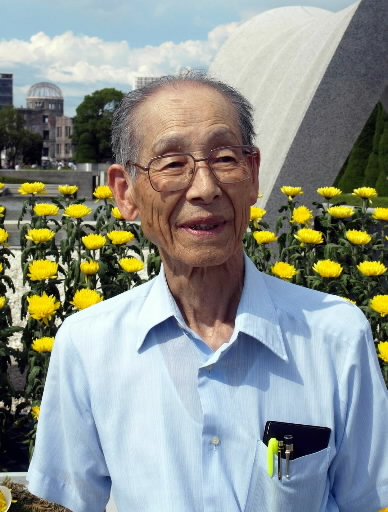 
Believing in the power of the A-bombed city
In 2005, a plan was announced that would transfer carrier-based aircraft of the Atsugi Naval Air Station in Kanagawa Prefecture to the U.S. Marine Corps Air Station in Iwakuni, Yamaguchi Prefecture, as part of the realignment of U.S. forces in Japan.

The plan would result in a base with the largest squadron of aircraft in the Far East situated right next to Hiroshima, which must send a message of peace to the world. And, what’s more, it was happening in my hometown of Iwakuni. I wondered how on earth such a thing could be allowed. I wrote 12 poems in a hurry. Writing a poem is usually more difficult for me, but they came quickly at the time. I guess I was just so angry about the situation.

In 2008, I compiled those poems and my past poetry into the book “Furusato: Iwakuni” (“My Hometown: Iwakuni”) and it was issued by the publisher Shichosha. I spent my boyhood in Iwakuni, and my youth in Hiroshima, attending high school under the old system of education. These were important times in my life. I feel it’s my duty to write about the transformations of these cities since then.

“...burned to bones by the atomic bombing, tens of thousands of them, / Still at the bottom of Hiroshima Bay /... / In Iwakuni, looking straight ahead / The largest base for battles in the Far East will emerge / Tens of thousands of bones, unable to utter a word, / Rattling and raising their silent voices / At the bottom of Hiroshima Bay.” (Source: “Hone ni Natte,” or “Now, They Became Remains,” by Hiromi Misho)

Children from all over the world who have visited Hiroshima Peace Memorial Museum have written such impressions as: “Can such cruelty be allowed to continue?” Such children have great sensitivity. I wrote a poem based on the true story of an Iraqi girl who developed breast cancer due to depleted uranium munitions. The poem is able to convey to readers the damage wrought by depleted uranium munitions and the current conditions involving Iraq. With regard to poetry about Hiroshima, I’m particularly fond of poems that make me feel the importance of life.

I sense great significance in Hiroshima’s power to make appeals to the world. Those exposed to radiation are now growing in number due to the damage caused by depleted uranium munitions, accidents at nuclear power plants, and other factors. Hiroshima’s role involves issuing a call for unity among those in the world who have been exposed to radiation and making appeals to advance the abolition of nuclear weapons. The challenge that Hiroshima poses still exists today. I believe the city can provide encouragement to radiation sufferers around the world, including those in Iraq and Belarus.

Sixty-five years have passed since the atomic bombing of Hiroshima. On August 6, the Peace Memorial Ceremony was held.

It was good that this year’s Peace Declaration made the appeal, in front of representatives from the United Nations, the United States, the United Kingdom, and France, for Japan to abandon the U.S. nuclear umbrella. There is a contradiction in the fact that Japan, the A-bombed nation, has been calling for nuclear abolition while remaining under the protection of the nuclear umbrella. The ceremony on August 6 of this year was fitting for the 65th anniversary of the atomic bombing, and has given me some hope for a world without nuclear weapons.