Atomic Bomb Literature in the 21st Century, Part 1: Works, Past to Present [2] 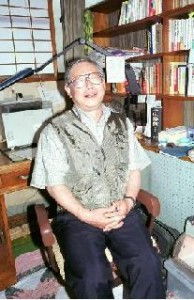 On August 6, 1945, Hitoshi Fujimoto, then a third-year student at the former Hiroshima Second Middle School, was working, as a mobilized student, for a military supply factory in Nishi Ward, Hiroshima. “Can you imagine the first thing that ran through my mind after I got over my shock?” he said. “I felt glad, thinking, ‘Now I can finally go home.’ It’s true.”

His joy faded fast, though, after witnessing horrific scenes at a shelter in the city of Hatsukaichi and on his way home to the city of Higashi-Hiroshima. He also recalls stopping by his school dormitory in the aftermath of the blast. He tripped over a bucket of sweet potatoes there and was scolded by a teacher. The parents of a student who lived in the dormitory had brought the bucket of sweet potatoes the day before, indicating that they were for everyone to share. But it was clear to Mr. Fujimoto that the teacher was intending to take the bucket back to his own home. “Life in the dormitory back then was filled with this sort of outrageous treatment,” he said. “Even before I experienced the atomic bombing, my spirit had already been thoroughly battered.”

Teachers at the school kept a sharp eye out for the students’ minor lapses, throwing their weight around and coming down hard on them for any transgressions. Meanwhile, the older students bullied the younger students in sadistic ways. For a middle school student who had been evacuated to Hiroshima from Tokyo, even the sound of the Hiroshima dialect was loathsome to his ears.

One first-year student was a habitual target of bullying by older students. For those who found it difficult to shrewdly play up to the older students or could not swiftly express agreement to the brutally frank opinions they espoused, the dormitory during the war was a world of cruelty. Mr. Fujimoto still recalls, with heartsickness, how the first-year student’s pretty older sister would sometimes visit to offer comfort to her depressed brother. “How would he look back on those painful days, after all this time and the opportunity to life through different experiences?” wonders Mr. Fujimoto. “That sort of subject is the theme of my work, and yet…”

Most of the first-year students of the school, mobilized to work at a site near the hypocenter, were killed in the blast. The chance to write about that first-year student, as an adult in a novel, was lost forever. “The atomic bomb killed him,” Mr. Fujimoto said. “I despise the bomb. But the bombing also impacted the teachers and the older students who tormented him. There must be a way to avoid lumping them together as A-bomb victims, but after the war, there was an atmosphere that lasted for a long time which didn’t permit people to mention such a thing.”

When Mr. Fujimoto started a coterie magazine at a university in Tokyo after the war, he was still caught up in that atmosphere. When he wrote “a story that simply appealed for peace in which all A-bomb victims are depicted as martyrs,” his friends withheld comment, not even mentioning the poor quality of the piece. Mr. Fujimoto rues the memory: “They knew I was an A-bomb survivor. Before the piece could be perceived as a literary work, it was upstaged by the A-bomb experience. I felt terrible about it. Writing about the atomic bombing in this way was wholly wrong.”

In his work entitled “Kurahashi Jima” (“Kurahashi Island”), a cruel, self-centered former teacher is an A-bomb survivor and his only son was killed in the bombing. The teacher, while mourning his son’s death, hurts others around him through his greed. In another of his pieces, entitled “Tanin no Kutsu” (“Other People’s Shoes”), published in the 20th issue of the coterie magazine “Haguruma” in 1970, he depicts an A-bomb survivor who takes shoes off the dead. And in “1945 Nen Fuyu” (“In the Winter of 1945”), published in the 27th issue of “Haguruma” in 1975, Mr. Fujimoto indicates that not all conscripted Korean laborers who experienced the atomic bombing are remembered as solely kind and innocent victims.

“What I’ve been pursuing is the so-called ‘I’ novel,” Mr. Fujimoto explained. “Whether I’m able to write well or not is everything. The word ‘well’ implies the extent to which I can remove the excess and describe a bare human being. The excess of an ‘A-bomb victim’ is, of course, no exception.”

[Memo]
“Kurahashi Jima” (“Kurahashi Island”) first appeared in the 18th issue of the coterie magazine “Haguruma,” published in December 1969. The piece is also included in “‘Hachigatsu Muika’ wo Egaku Dainishu” (“The Second Collection to Describe ‘August 6’”), issued by the publisher Bunka Hyoron Shuppan in 1971, and “Nihon no Genbaku Bungaku 11” (“Atomic Bomb Literature of Japan, 11”), issued by the publisher Holp Shuppan in 1983.

The first-person narrator’s aunt had remarried, but her husband dies in the atomic bombing. Due to trouble over the inheritance of their property, the younger brother of the husband kicks her out of the house and he settles there on the island. The narrator despises the man, a former physics teacher at the school to which he had transferred, and visits the island 20 years after the end of the war. At that time, the narrator learns what happened to the man, how he chose to commit suicide due to his wife’s death as well as a feud with his adopted child.

Hitoshi Fujimoto was born in Tokyo in 1930. He now lives in the city of Kure in Hiroshima Prefecture.