Atomic Bomb Literature in the 21st Century, Part 1: Works, Past to Present [4] 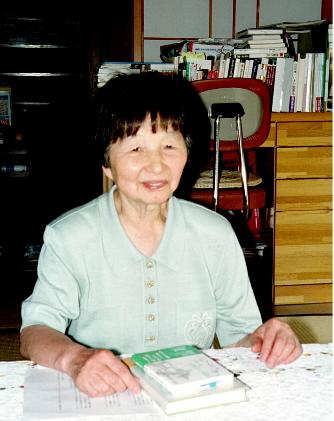 Chihoko Koura and “Fading with Time”: A woman “who should be dead” faces up to disease
by Katsumi Umehara, Staff Writer

In 1982, an international peace conference of writers was held in Cologne, a city in then West Germany. Chihoko Koura read aloud from her novel entitled “Fuka no Soko” (“Fading with Time”) at a reading one evening in front of an audience of nearly 1,000 people. “I was nervous,” she recalled, “so that’s partly why I wasn’t sure about the audience reaction. The work seemed to be appreciated as a love story, rather than as a story about the atomic bombing.”

The main thrust of the conference in general, as well as at the reading, was neither anti-nuclear appeals nor appeals for peace, as Ms. Koura had expected before leaving for West Germany. Instead, there were appeals, launched mostly by writers from Asia and Africa, against poverty and famine caused by the exploitation of developed nations. “The thing is, the pain of A-bomb survivors is an important problem for people everywhere, but it’s not the only problem,” she said. “I think what first touches the hearts of people in places where the suffering from hunger is seen around them is different. Still, I felt disheartened, wondering how a writer who tried to take on all the problems on earth could write anything at all.”

Words from Yoshie Hotta, a writer who accompanied Ms. Koura to the conference, cleared the dark clouds in her mind. Standing before Cologne Cathedral, Mr. Hotta told her: “The view from the spire of the cathedral doesn’t encompass everything that can be seen. Some things cannot be seen through the eyes of a bird.” He added: “You should just write what you are able to see, this moment, while walking along the pavement.”

At the time of the atomic bombing, Ms. Koura was a student in the Aki District in Hiroshima Prefecture, a location seven kilometers from the hypocenter. Her mother, who had left home earlier that morning and was in the vicinity of the hypocenter, took to bed sick, while survivors of the blast in grotesque and horrendous states were directed one after another to the school that she attended.

Her shock over the terrible event turned to terror when a police officer visited her house the next year in connection with a report being compiled on the A-bomb damage. “Chihoko was the one who died, is that correct?” he asked. The name “Chihoko”—her name—was written in his pocket notebook and had been crossed out with two lines. Due to some confusion, it seems that Ms. Koura was mistaken for another “Chihoko” who lived in a different house. “I thought how unsurprising it would have been if one of those A-bomb victims that I saw at school, with pus oozing through their bandages, had been me,” she said.

In her novel entitled “Fuka no Soko,” Ms. Koura wrote about the life that “Chihoko, who should be alive” could have lived. The story begins with a scene in which the main character and her boyfriend, a newspaper reporter, visit an A-bomb survivor nearing death. The boyfriend distances himself from the survivor, saying, “That person has already become a thing,” while the main character finds it hard to sort out her feelings. Ms. Koura created the character of the A-bomb survivor based on Shinoe Shoda, an A-bomb poet. “As I wasn’t able to look directly at Ms. Shoda, when she was dying, I couldn’t bring myself to visit her,” she explained.

Ms. Koura met Ms. Shoda two years before the poet’s death through one of her literary friends. As Ms. Shoda’s cancer progressed, Ms. Koura saw the natural fear and distrust that she came to feel toward others, then watched as these feelings fueled abusive language to those around her.

“It was a completely different side of her,” Ms. Koura said, “so different from the emotions she had expressed through her literature. She was dying an ordinary person, but I was expecting the death of a great poet.”

Ms. Koura herself developed cancer 13 years ago. Last year she lost her husband, Takahiko, to cancer as well. Takahiko was a newspaper reporter and though Ms. Koura did not model the main character’s boyfriend, Katsuhiko, after him, “his personality was very similar to Katsuhiko.”

“The theme of my writing from this point on will be myself, the person I felt on that pavement in Cologne, the person who accepts disease in stride,” said Ms. Koura. “As ‘Chihoko who should be dead,’ I believe this is my duty.”

[Memo]
“Fuka no Soko” (“Fading with Time”) was first published in the December 1967 issue of the magazine “Shincho.” The piece is also included in the book “‘Hachigatsu Muika’ wo Egaku Dainishu” (“The Second Collection to Describe ‘August 6’”), published by Bunka Hyoron Shuppan in 1971, “Nihon no Genbaku Bungaku 11” (“Atomic Bomb Literature of Japan, 11”), published by Holp Shuppan in 1983, and a collection of writing entitled “Kaze Mayou” (“The Wind Wanders”), published by Yukawa Shobo in 1977.

The first-person narrator feels attraction for her boyfriend, a newspaper reporter who devotes himself to gathering materials for articles on the A-bombed city of Hiroshima, but she somehow feels a certain distance between them due to her obsession with her status as an A-bomb survivor. The boyfriend takes her to task, saying, “You aren’t willing to even trust me.” The narrator tries responding to him by writing these words on a paper lantern designed to be floated down the river to mourn the souls of the dead: “Mother, Father, as I pray for the repose of your souls, I’m living my life with all my might.”

Chihoko Koura was born in 1931 in Kaita town in Aki District, Hiroshima Prefecture. She still resides at the same location.