Atomic Bomb Literature in the 21st Century, Part 1: Works, Past to Present [5] 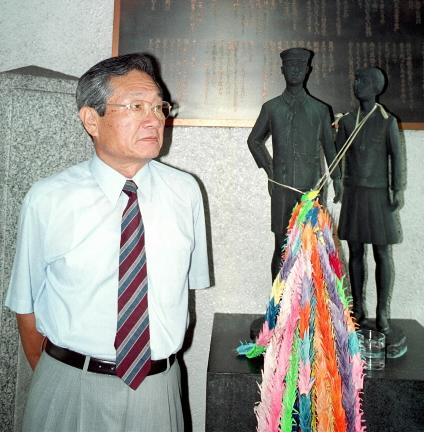 Yoichi Terashima and the “Introduction to Sankichi Toge and His Time”: Feeling discomfort with a “savior” lacking the viewpoint of “refugees”
by Katsumi Umehara, Staff Writer

In 1953, the year poet Sankichi Toge died, Yoichi Terashima was a student at Kyoto University and was writing antiestablishment poetry under the pen name of Yoji Shima. Mr. Terashima knew little about Mr. Toge amid that era of political disorder which was later depicted in the film “Nihon no Yoru to Kiri” (“Night and Fog of Japan”), directed by Nagisa Oshima. Mr. Terashima was experiencing personal troubles, which seemed to leave him with no way forward: he could not find employment due to contracting tuberculosis and he was unable to go on to graduate school, either, for family reasons. “Since that time I have seen life colored by the idea of ‘refugees,’” Mr. Terashima said. “I myself was a refugee from society.”

His experience returning from Shanghai to Japan as a repatriate, as well as the difficult lives led by A-bomb survivors after the war, which he encountered in his father’s hometown of Hiroshima, seemed to be challenges confronting “refugees.” After returning to Hiroshima, Mr. Terashima became employed as a probation officer for the family court, a newly-created post. The “refugee” perspective remained at the core of his life, though, even after joining the poetry magazine “Warera no Uta” (“Our Poetry”), which succeeded the poetry magazine “Our Poems,” discontinued in the wake of Mr. Toge’s death. Perhaps for this reason, Mr. Terashima felt, from the start, some discomfort about Mr. Toge’s poetry.

“Many of Toge’s poems are written from the standpoint of a ‘savior’ of refugees,” explained Mr. Terashima. “With this view from a higher vantage point, the poems seek to rouse and encourage refugees. But the refugees’ pains, grudges, and sense of overwhelming helplessness are beyond the reach of these poems.”

Mr. Terashima could not get accustomed to the atmosphere in which Mr. Toge, who had often taken the initiative in a variety of cultural activities, was treated as something of a “saint” after his death. Kazuko, Mr. Toge’s wife, whose name was legally Kazuko Harada as she could not have her name deleted from the family register of her ex-husband, asked Mr. Terashima to write a “critical biography” of Mr. Toge and provided him with Mr. Toge’s diary around 1959. There were indications, though, that the diary had been tampered with, probably by Kazuko. Such signs were particularly prominent in connection with Mr. Toge’s attractions to women other than Kazuko. “It was conspicuous meddling, not for the purpose of protecting his privacy, but to avoid damaging the image of Mr. Toge as a ‘saint,’” Mr. Terashima said. “Readers were supposed to shut their eyes to Mr. Toge as a human being.”

Mr. Terashima abandoned the idea of writing a biography of Mr. Toge and returned the diary to Kazuko. Kazuko, on behalf of her husband, appealed for the elimination of nuclear weapons as a “savior of refugees,” continuing to appear enthusiastically as “Mrs. Toge, preserving the legacy of Sankichi Toge.” In 1965, however, she died in a mysterious suicide.

Eight years later, Mr. Terashima started work on a piece entitled “Toge Sankichi to Sono Jidai Josetsu” (“Introduction to Sankichi Toge and His Time”) in which he sought to shed light on his time of confusion, featuring Mr. Toge and weaving in his previous experiences and considerations.

In his work entitled “Hibari to Shonen” (“Larks and Boys”), the sequel to “Toge Sankichi to Sono Jidai Josetsu,” Mr. Terashima expressed appreciation for Tamiki Hara, who did not “add personal interpretations and emotions.” Mr. Terashima also explored the lives of these two men of letters through a comparison of their wives and their essence of motherhood. Sadae, Tamiki’s wife, became an “eternal mother” by passing away before Tamiki, while Kazuko turned into a “tainted mother” by outliving Sankichi.

In the meantime, Mr. Terashima unearthed the poetry of Hisashi Mochizuki, an A-bomb poet who had been writing poems with Mr. Toge since the era of the poetry magazine “Our Poems,” but had always stood outside the movement and had gained no renown for his work. In 1996, the year Mr. Mochizuki died, Mr. Terashima completed a collection of poems written by Mr. Mochizuki.

Poems by Mr. Mochizuki, who was puzzled whether he should buy a sewing machine with A-bomb condolence money for his younger sister and lamented his clumsy way of living with the words “I can’t be a soldier” and “I’m no good at business, either,” represented, to Mr. Terashima, the very world of refugees that Mr. Toge had passed through without stopping. “Nanmin” (“Refugees”), the title of Mr. Mochizuki’s poetry book, was the idea of Mr. Terashima, who settled on this title after gaining Mr. Mochizuki’s consent.

“Mr. Mochizuki was at the other end of the spectrum from Mr. Toge, who was a kind of winner,” Mr. Terashima said. “I can’t help but love lives that are always slipping from the world which Mr. Toge tried to lead.”

A critical biography of Mr. Mochizuki entitled “‘Nanmin’ no Shijin: Mochizuki Hisashi” (“Hisashi Mochizuki: A Poet and ‘Refugee’”) began to appear in serial form in the 23rd issue of “Chiheisen” (“Horizon”) in 1997, the in-house magazine of the KJ Method Association in Hiroshima, which was edited by Mr. Terashima. In the 29th issue of the magazine to be published in October of this year, the seventh installment will be published.

Among other essays on Atomic Bomb Literature by Mr. Terashima is “Firudo Waku: Genbaku Kankei Bunken” (“Fieldwork: Documents Related to the Atomic Bombing”), carried in the sixth issue of the magazine “Kajinoha” (“Leaves of Paper Mulberry”) in 1995. The book entitled “Mochizuki Hisashi Shishu: Nanmin” (“The Collected Poems of Hisashi Mochizuki: Refugees”) was issued by the publisher Sosho Miru.

Yoichi Terashima was born in 1932 in the city of Kitakyushu. He moved to Shanghai when he was in the second grade in elementary school. He returned to Hiroshima after the war, and now lives in Aki Ward, Hiroshima.