Atomic Bomb Literature in the 21st Century, Part 2: Works, Past to Present [3] 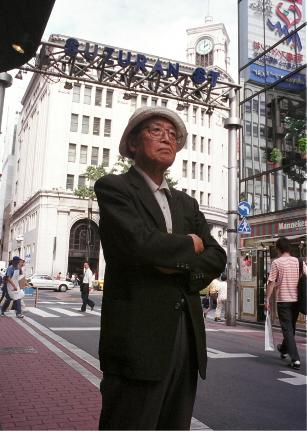 Koji Ishida and “The Memory of Clouds”: With personal experience at the root of his work, experiments in literary technique are of little interest
by Katsumi Umehara, Staff Writer

On August 5, 1945, Koji Ishida, who was then a fourth-year student in middle school, was watching a movie about a professional gambler in the 19th century at a movie theater in downtown Hiroshima, fated to be the hypocenter of the atomic bomb. Several days had passed since he received the medical certificate stating that he had suffered a “nervous breakdown” and stopped going to a factory located in the Minami Kanon district where he had been mobilized for the war effort. He remembers being on pins and needles when he joined the line at the movie theater. Clad in his father’s shabby national uniform and a cap for factory workers, he was afraid of being questioned by a military policeman.

“I was worn out by the people at the factory where I had been mobilized for the war effort, and so I took a leave of absence from school,” explain Mr. Ishida. “I’m not saying it helped me keep my composure. In fact, I was really worried about my future. Taking a leave of absence from school in the middle of the war, when everyone was going mad over it, I was afraid my future would wind up completely closed. Going to the movies was an act of desperation, prompted by my feelings of despair, anxiety, and loneliness. My mind was occupied with personal concerns, but I felt as if I had turned the entire world against me. I was looking up at the screen and I murmured to myself: ‘I hope everything is destroyed.’ That’s the thing I recall most clearly.”

The very next day, Hiroshima was devastated by the atomic bomb. Panic swept over Mr. Ishida as he rubbed the sleep from his eyes at his home in the Koiue district, three kilometers from the hypocenter. Soon after, he encountered a crowd of A-bomb casualties at a nearby elementary school. His younger brother, a first-year student in junior high school, was exposed to the blast at a site where he had been mobilized for the war effort, located one kilometer from the hypocenter. He managed to make it home, but his face was so swollen with burns that he was beyond recognition. He died the next day.

“When my feelings of shock and sorrow and fear subsided, they were replaced by a searing frustration over the question of how I should perceive those circumstances,” Mr. Ishida said.

Throughout this time, relief efforts continued in the schoolyard of the elementary school. As the A-bomb victims, brought in one after another, turned into “objects to be handled,” his hands and feet moved mechanically. With his mind detached from the scene, grappling to comprehend the disaster, the process of piling up the dead was repeated again and again.

His experience of that time was strongly reflected in his novel “Kumo no Kioku” (“The Memory of Clouds”), in which neither the word “Hiroshima” nor “atomic bombing” appear. Mr. Ishida said, “An expression like ‘shedding tears’ to convey the true feeling of sadness rings hollow. The same is true of my novel. When I described the scene that my hands and feet experienced, rather than the facts known by my mind, the novel took form.”

When the numbness in his mind faded, Mr. Ishida was tormented by the question: Why am I alive? “Until the day before the bombing,” he said, “I went so far as to think that I would rather die than live. I imagined my younger brother, who had never thought that way, and those who must have strived to live transformed into things, into burnt embers. In order to clarify and find meaning in my experience, I put an end to the question by thinking that I would continue to live for them.”

During his days at the former Hiroshima High School, Mr. Ishida published well-received works in the coterie magazine “Ido Fukei” (“Moving Scenery”), whose publication was revived by Yukio Hajiro, one of his professors, and in the coterie magazine “Esupowaru” (“Espoir”), which was established by the students. After a year of working for a bank, Mr. Ishida abandoned his job and left for Tokyo. His writing style—shown from “Ue no Genin” (“The Cause of Hunger”), published in the 12th issue of the coterie magazine “Hiroshima Bungaku” (“Literature of Hiroshima”) in 1956, to “Kutsu” (“Shoes”), carried in the June 1959 issue of the magazine “Gunzo” (“Crowds of People”), to “Kumo no Kioku”—established an imaginary dimension that went beyond pure realism and keenly reflected the background of the A-bombed city of Hiroshima. His approach to the subject matter was considered a style that indicated a new horizon for Atomic Bomb Literature.

Mr. Ishida, however, commented: “I’m not particularly interested in experiments involving literary techniques. What underlies my work is my personal experience, the scene remembered by my hands and feet. My writing appears to be experimental, as my experience itself was abstract. Still, I don’t feel that I’ve fully captured my experience in my work.”

[Memo]
“Kumo no Kioku” (“The Memory of Clouds”) was first published in the September 1959 issue of the magazine “Gunzo” (“Crowds of People”). The piece is also contained in the book entitled “‘Hachigatsu Muika’ wo Egaku” (“The Collection to Describe ‘August 6’”), issued by the publisher Bunka Hyoron Shuppan in 1970, and the book “Nihon no Genbaku Bungaku 10” (“Atomic Bomb Literature of Japan, 10”), published by Holp Shuppan in 1983. In the story, the first-person narrator and a comrade carry an endless stream of patients into a tent pitched in a corner of a schoolyard then lug the dead back out. The narrator returns to his wife, who is staying at her parents’ house in the southern part of the city for the birth of a child, and he looks back on the events of the day. When he glances over at his wife, he notices that the fingers on her hand have become crooked and her skin is bulging in an ugly way. Reality and fantasy are intricately intertwined, providing the novel with an eerie sense of existence.