Atomic Bomb Literature in the 21st Century, Part 2: Works, Past to Present [4] 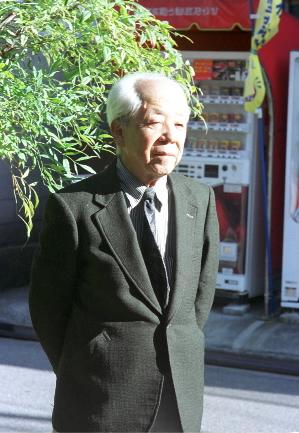 Ten Tabata and “Dance Music for the Atomic Bombing”: Conveying the facts faithfully and mourning for those who died that day
by Katsumi Umehara, Staff Writer

In 1988, when Ten Tabata read a newspaper article announcing that the “Sea & Islands Expo, Hiroshima” would be held the next year in commemoration of the 100th anniversary of the city of Hiroshima, he wasn’t pleased. “I felt that it was more appropriate to hold an ‘Atomic Bombing Expo’ to mark the 100th anniversary of the city,” he said. “I thought the atomic bombing was something that should be publicized more widely than the theme that was announced.”

Mr. Tabata recalled his experience of the atomic bombing, which took place when he was a student at Hiroshima Technical Institute. The piles of rubble and the severity of the burns to human flesh can be gleaned at Hiroshima Peace Memorial Museum or from books. But the stench of burning human skin and the rust-colored or whitish-brown sheen on buildings as a result of the rays which emanated from the bomb remain only within the minds of those who experienced the bombing directly.

“The stench, the color, and the air… When I was devising a way to recapture my experience of the A-bombed city, I realized that it would be impossible to realize this aim. It wasn’t due to a technical problem; it was because of the fact that nobody really wanted to know about such things,” Mr. Tabata said.

In his novel entitled “Ichiro” (“Ichiro”), published in 1953 in the seventh issue of the coterie magazine “Hiroshima Bungaku” (“Literature of Hiroshima”), Mr. Tabata had a female A-bomb survivor with keloid scars in her 20s say: “People are making an issue of the Hiroshima Maidens, but even such women with keloid scars just suffered scratches, in a way, compared to so many others who died with no chance to even cry out.”

In his piece entitled “Hibaku Butokyoku” (“Dance Music for the Atomic Bombing”), which was published 40 years later, a female A-bomb survivor in her 60s says: “The public feels sorry for keloid scars and sympathizes with elderly A-bomb survivors, you know. But I think experiences that only left a scar on a cheek or that permitted A-bomb survivors to live to a ripe old age can’t really be counted as the A-bomb experience.”

A-bomb survivors who live a distorted life due to ugly keloid scars and the fear of radiation have been described in many stories. In Mr. Tabata’s opinion, the prevailing atmosphere that demanded unconditional sympathy for these characters was caused by the public sentiment that did not want to remember those who died that day. “It’s painful to recognize the existence of those who were forced to die due to science,” Mr. Tabata said. “People died like insects that day. I felt I had to write a novel that began with that fact, rather than the usual depiction of dignity.”

Nearly all the main characters in Mr. Tabata’s works are kindhearted souls and befuddled to the degree that they are unable to make clear sense of their own attitudes. However, Tan Mitsuya, the main character in “Hibaku Butokyoku,” is starkly different and says, “To be frank, I was very moved by the atomic bombing of Hiroshima. I was struck by the tremendous technological power held by human beings.”

A character similar to Mr. Mitsuya appears in another piece by Mr. Tabata entitled “Shitsuraku no To” (“The Tower of Lost Delight”), which was carried in the sixth issue of the coterie magazine “Haguruma” (“Cogwheels”) in 1958, but the serial was suspended after the first installment. Mr. Tabata commented: “As a narrator, I knew I needed such a character, but I couldn’t write it at the time. When some people, right then and there, were dying of radiation sickness and others were struggling with difficult lives due to disease, I couldn’t say: ‘You should think only of the people who died that day.’”

Mr. Tabata poured his long-held feelings into the last scene of “Hibaku Butokyoku,” in which a female A-bomb survivor of Mr. Tabata’s generation presses herself against a robot leaking radiation and shouts, “Please dispose of us! And please open the Atomic Bombing Expo!” Mr. Tabata said, “I’m over 70 years old now. This is the age when people, regardless of whether they experienced the atomic bomb or not, are filled with deep emotion and feel amazement at the fact that they have lived as long as they have. Mourning for the people who died in the bombing means, I think, not to pray over the peace we now share, but to convey the facts of that day faithfully.”

[Memo]
“Hibaku Butokyoku” (“Dance Music for the Atomic Bombing”) was first published in the third issue of the magazine “Kajinoha” (“Leaves of Paper Mulberry”) in 1995. In the same year, the piece was issued in book form by the publisher Keisuisha. In the story, an employee of an event company who is nominated as the organizer of an Atomic Bombing Expo makes full use of the latest technology, including robots moved by atomic energy, and is eager to restore the city to its state at the time of the atomic bombing. After one of these robots, into which the thoughts and ideas of the time have been input, learns about the death of the Emperor Showa, it commits hara-kiri and causes an accident involving a leak of radiation.

Ten Tabata was born in Hiroshima in 1927. He experienced the atomic bombing in Ozu, two kilometers from the hypocenter. He spent the night in Shukkeien Garden on that day. His other works on the atomic bombing include a piece entitled “Yoru no Kyozou” (“A False Image of the Night”), published in the second issue of the magazine “Hiroshima Bunko” (“Hiroshima Paperback Library”) in 1969 and “Hosukei” (“A Pedometer”), published in the May 2000 issue of the magazine “Shin Nihon Bungaku” (“New Japanese Literature”). Mr. Tabata now lives in Hiroshima.