Atomic Bomb Literature in the 21st Century, Part 2: Works, Past to Present [5] 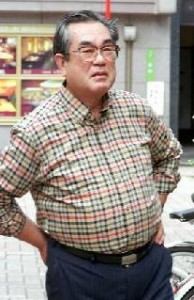 Seiichiro Iwasaki and “The Thought and Expression of the A-bombed City of Hiroshima”: Tamiki Hara observes humans, without being bound by popular myths
by Katsumi Umehara, Staff Writer

In July 1945, Seiichiro Iwasaki, then a second-year student in middle school, picked up one of the propaganda leaflets that were scattered in the sky over the city of Matsuyama in Ehime Prefecture by a U.S. military plane. The 13 items of the Potsdam Declaration and a description of better living conditions under a democratic system after the war were contained in the leaflet. Mr. Iwasaki could not imagine what democracy would be like. However, he understood that democracy, if nothing else, would be “a world in which I don’t have to become a soldier.” The idea captivated him so much that it almost made him tremble.

His friends and family advised him to “throw the leaflet away, because keeping it is dangerous.” But Mr. Iwasaki secretly put it in the back of the drawer of his desk, like it was a treasure of some kind. “The feeling that such a thing mustn’t be spoken was widespread, but the desire to avoid becoming a soldier was a normal and decent, if hidden, wish at the time,” Mr. Iwasaki said.

Shortly after the hydrogen bomb test at the Bikini Atoll, the writer Yoko Ota was criticized for writing “Serves you right! You should die one after another, covered with nuclear fallout” in her work entitled “Hanhoro” (“A Half-vagabond”) in 1956. “It may have been too vocal for the times,” Mr. Iwasaki said, assessing the sentiment, “but it was a fitting outcry.”

Mr. Iwasaki notes the regression of Atomic Bomb Literature that relies on formulaic myths, pointing to the description in a piece entitled “Zanshu Tenten” (“Residue of Squalor”) in 1954 in which a woman, in front of a girl suffering from the aftereffects of keloid scars, weeps openly, as if crying her heart out, for the present and future of such girls and at the “directness” of an episode in which a slug serves as a reminder of A-bomb victims.

“If the A-bombed city of Hiroshima is conveyed solely with a sense of mission, ‘teaching’ will be the only aim. I guess this structure alone is not much different from the enthusiasm of the Japanese Defense Association of Women, which sent off soldiers to the front. The popular myth that ‘We will keep winning the war’ has been replaced by another popular myth: ‘We will win people’s opposition to war.’”

Mr. Iwasaki finds the same sense of mission in the “innocent dogma” that is seen in many works of children’s literature dealing with the atomic bombings. The goodwill and the desire “to convey the horror of the atomic bombing” simply results in a stereotyped mindset that leads to citing a large number of “data and episodes obtained secondhand,” connecting these directly to the “wish for peace.” In many of these works, the characters, who are often clearly differentiated as “good guys” and “bad guys,” force popular myths on readers from beginning to end in the story line, without experiencing confusion, suffering pain, and undergoing shifts in their personalities.

“In some cases, a horror story that makes readers feel ‘queasy’ or ‘uncomfortable’ is sufficient,” Mr. Iwasaki said. “Such a work will only assume the role of drawing out a textbook answer from children that war and atomic bombs are bad. If writers are bound only by ideas that are removed from reality, readers have no choice but to react that way.”

Mr. Iwasaki considers the works of the writer Tamiki Hara to be at the opposite end of the spectrum with regard to Atomic Bomb Literature that is tainted by popular myths. For instance, Mr. Iwasaki cites the peaceful murmur of a girl with serious burns who is looking forward to the dawn, and a small human quarrel over the space in which a futon is laid out. “Mr. Hara’s eyes, which were different from the observant eyes of Ms. Ota and sought to see the beauty in human beings, consistently underlie his work,” Mr. Iwasaki observed. “His writing holds only descriptions filled with literary brilliance, immune from a sense of mission.”

Mr. Iwasaki visited Germany this past summer and stood in front of the building in which the Potsdam Declaration was drawn up. “Was I filled with deep emotion?” Mr. Iwasaki asked. “No, I wasn’t. Bringing up the pre-war experience and looking back on the post-war democracy is also a popular myth now. At least, I don’t feel like reading a piece intoxicated with such sentimentality. I only thought, ‘It’s an antiquated building.’ You know, like the post-war democracy in Japan and a large number of works of Atomic Bomb Literature bound by bad popular myths.”

[Memo]
“Hiroshima no Shiso to Hyogen” (“The Thought and Expression of the A-bombed City of Hiroshima”) was first published in the 33rd issue of the coterie magazine “Aki Bungaku” (“Literature in the Aki Region”) in 1972. The piece consists of three parts: “Bungaku” (“Literature”), “Eizo” (“Images”), and “Shiso” (“Thought”). Mr. Iwasaki pointed out the dissociation of “Hiroshima” and “the A-bombed city of Hiroshima,” which is represented in “the sense of disappointment of those who come to Hiroshima from Tokyo to gather information about the A-bombed city of Hiroshima.” Mr. Iwasaki dismissed outdated gestures and expressions, and, from the standpoint of literary supremacy, advocated ideas that were not bound by popular myths.

Seiichiro Iwasaki was born in Hiroshima in 1931. At the time of the atomic bombing, he was in the suburbs of the city of Matsuyama, Ehime Prefecture, due to his father’s job transfer to the area. His other essays on the atomic bombing include “‘Genbaku Bungaku’ Shiron” (“A Historical Essay on ‘Atomic Bomb Literature’”), which is contained in a collection of his works entitled “Higure no Machi” (“The Town at Sunset”), issued by the publisher Keisuisha in 1987. He also wrote a novel entitled “Suguru Natsu ni” (“In Passing Summer”), which was published in the 12th issue of the coterie magazine “Aki Bungaku” (“Literature in the Aki Region”) in 1962. The story is also contained in the book “‘Hachigatsu Muika’ wo Egaku” (“The Collection to Describe ‘August 6’”), published by Bunka Hyoron Shuppan in 1970, and “Nihon no Genbaku Bungaku 10” (“Atomic Bomb Literature of Japan, 10”), issued by Holp Shuppan in 1983. Mr. Iwasaki now lives in Hiroshima.