Atomic Bomb Literature in the 21st Century, Part 2: Works, Past to Present [6] 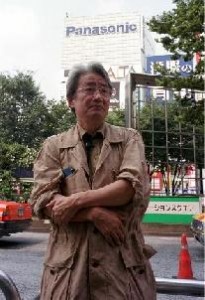 Michio Ochi and “The Bequeathed Life”: Expressing anger is necessary for peace, too
by Katsumi Umehara, Staff Writer

Michio Ochi describes the nine years from 1956 to 1965, when he lived in Hiroshima, in this way: “I sensed a nagging discomfort in the city, like it was lingering in the air.” Mr. Ochi went on: “The town was pervaded with Hiroshima speech, spoken in the sticky Hiroshima dialect. I tried to be a bystander, but the gloomy mood clung to me.”

“Hiroshima speech” refers to such expressions as “we shall not repeat the evil,” a phrase inscribed on the Cenotaph for the A-bomb Victims. Such language is frequently used each year as August 6 approaches. “I wondered why the words of the A-bomb survivors, expressing their hatred or anger at a particular target, weren’t being uttered openly,” Mr. Ochi said. “I couldn’t shake the sense of an atmosphere that deterred me from expressing those feelings openly.”

The sorrow of the people of Hiroshima has lingered long after the community suffered the devastation of the atomic bombing. The dead and the survivors remain tied to pre-war Hiroshima; they are not “A-bomb victims” in the abstract.

The characters that inhabit Mr. Ochi’s works have little in the way of family feeling. The domestic life described in his piece entitled “Izosareta Seikatsu” (“The Bequeathed Life”) is fraught with tension and a sense of desperation hangs over the story. It seems the characters, who are A-bomb survivors, are determined to conceal their origins and exist in the present, while obsessed with suppressing their emotions.

“When I tried to write about the suffocating air that I had experienced in Hiroshima, the piece naturally took that form,” Mr. Ochi explained. “But I also knew vaguely that if I barricaded myself into the gloomy feeling, an exit would disappear. For instance, like the cooped-up feeling that James Joyce, the Irish writer, experienced in his hometown of Dublin before leaving for the European continent and writing ‘Ulysses,’ a 20th century masterpiece.”

As a graduate student, Mr. Ochi published a piece entitled “Jeimuzu Joisu no Shinpi Shugi” (“Mysticism of James Joyce”) in the 12th issue of the magazine “Hirodai Bungaku” (“Literature of Hiroshima University”) in 1960, and then the 400-page “Gunto” (“The Cluster of Towers”) in the fifth issue of the magazine “Hako” (“Boxes”) in 1962 under the pen name Yuria Haibara, a name associated with “Ulysses.” In his work entitled “Kagami to Kaze no Itsuwa” (“An Anecdote of a Mirror and Wind”), published in the 17th issue of the coterie magazine “Aki Bungaku” (“Literature in the Aki Region”) in 1964, he made full use of long monologues, a grave style, and endless shifts of scenes, which he had learned from Joyce and John Dos Passos, among others. For this piece, Mr. Ochi developed a story in which a character searches for the whereabouts of the father who has gone missing after experiencing the atomic bombing.

Even after moving to Tokyo, Mr. Ochi continued to write about the wandering souls of A-bomb survivors who lost their connections of place with Hiroshima. Examples include his piece entitled “Omoi Kage” (“The Heavy Shadow”) in the 20th and 21st issues of the coterie magazine “Aki Bungaku” in 1966 and “Yonen Seikatsu” (“The Life in Childhood”) in the September 1972 issue of the magazine “Bungei” (“Literature”). However, after he wrote the piece entitled “Mayu no Seijuku” (“The Maturity of a Cocoon”), which appeared in the September 1974 issue of the magazine “Mita Bungaku” (“Literature in Mita”), he moved away from writing novels.

Mr. Ochi said, “I felt that even if I continued writing novels in this style, I wouldn’t be able to write a myth about the atomic bombing in the same way as Joyce did when he created the mythical world of ‘Ulysses,’ putting his life in Dublin into the piece.”

Mr. Ochi’s experience of visiting Australia as a scholar of English literature, as well as his visit to the United States in order to collect information for his reports entitled “Wasupu” (“WASP”) and “Amerika ‘60 Nendai’ eno Tabi” (“A Journey to America in ‘the 60s’”), among other reasons, gave him opportunities to view “the experience of Hiroshima sullied by Hiroshima speech” from a different angle. In one example, the still-raw bitterness caused by the surprise attack on Pearl Harbor was directed at Mr. Ochi because of his Japanese ethnicity.

“I suppose that the sense of sorrow in Hiroshima has led people to create the ‘no-hatred’ stance of Hiroshima speech,” Mr. Ochi said. “Expressing anger, though, is sometimes necessary to effect peace. Figuratively speaking, an atomic bomb is dropped every day out in the world, causing crises for human beings. I myself lost the desire to express things through novels. But Atomic Bomb Literature, in order to maintain its power in the 21st century, first needs to understand the nature of Hiroshima.”

[Memo]
Mr. Ochi’s novel “Izosareta Seikatsu” (“The Bequeathed Life”) was first published in the April 1968 issue of the magazine “Tenbo” (“Perspective”). The piece is contained in his collection of writing of the same title, which was issued by the publisher Tojusha in 1977, and the book entitled “Nihon no Genbaku Bungaku 11” (“Atomic Bomb Literature of Japan, 11”), published by Holp Shuppan in 1983. The first-person narrator returns to “the town where the streets are covered with the uncomfortable feeling of viscosity” and helps with a supper club run by Kurosaki, an older student from his alma mater, after Kurosaki asks him to assist with some translation work. In a house that has remained tilted since the blast of the atomic bomb, the narrator, Kurosaki, and Nobuko, an A-bomb orphan taken in by Kurosaki, begin living together. When the female owner of a coffee shop, where Nobuko works, commits suicide and the shop is set to be bequeathed to Nobuko, she discovers that she is pregnant.

Michio Ochi was born in the city of Imabari, Ehime Prefecture, in 1936. He graduated from the English Literature Department of the Faculty of Letters at Hiroshima University and Hiroshima University Graduate School. His other works on the atomic bombing include “Hadaka no Su” (“A Bare Nest”), published in the 28th issue of the coterie magazine “Aki Bungaku” (“Literature in the Aki Region”) in 1970. Dr. Ochi also mentioned the A-bombed city of Hiroshima in his book entitled “Genso no Kogai” (“The Illusionary Suburbs”), which was issued by the publisher Seidosha in July of this year. Mr. Ochi now lives in the city of Sagamihara, Kanagawa Prefecture.