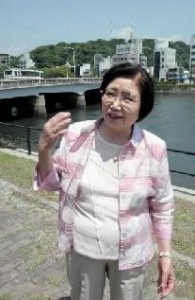 Part 1: “It's good to be alive”
Article 1: At the foot of Hijiyama Bridge
by Masami Nishimoto, Senior Staff Writer

Yoshiko Takano, 73, now a resident of Higashi Ward, Hiroshima, was a first-year student in junior high school in 1945. That summer she and her schoolmates were mobilized for the war effort and on the morning of August 6 she was helping to clear homes and other buildings that had been demolished in order to create a fire lane in the event of air raids.

“I was gathering up some pieces of wood and about to stand,” Ms. Takano recalled, “when there was a flash. If my face had been down just a bit more, I wouldn't have gotten scarred like this.” Laboring outside in the Showa district of Naka Ward, the girl with the bobbed hair was about 1.5 kilometers southeast of the hypocenter and her body was burned by the bomb's flash from head to toe.

A photograph taken by the U.S. Strategic Bombing Survey in November 1945, three months after the atomic bombing, shows that part of the railing of Hijiyama Bridge, which spans the Kyobashi River flowing near the Showa district, had been blown away by the blast. Left behind on the bridge, though, is a post which bears the scars of the bomb's overwhelming force.


Unchanging feeling
At the request of the Chugoku Shimbun, Ms. Takano paid a visit to the foot of Hijiyama Bridge and spoke about that day in an even tone.

Her first memory after the blast is of looking about in a daze for the cloth bag that she had been carrying. Then a friend cried her name and she was jarred back to herself. When she touched her cheek with her fingertips, the skin stuck to her fingers. Glancing at her arms, she saw that the skin was flayed and dangling from them. She fled north from the approaching flames, making her way along the tracks of a streetcar line. She recalls hearing the cry of a father: “Help! My child is trapped!”

“But no one would stop,” Ms. Takano said. “Everyone was desperate to flee. My friends were killed and my face was burned.” She went on: “Such a terrible thing must never happen again. Even though it's been a long time since I played an active role in the survivors' movement, that feeling won't change until the day I die.”

Ms. Takano's maiden name is Murato. She is now one of the few remaining A-bomb survivors whose contribution is integral to an accounting of the A-bomb survivors' movement.

In 1955, ten years after the atomic bombing, the World Conference Against Atomic and Hydrogen Bombs was held for the first time. About 1,900 participants, including those from overseas, filled the conference venue, the newly-built Municipal Auditorium in Hiroshima Peace Memorial Park. Ms. Takano, standing before them, described the reality of the atomic bombing and displayed the scars on her body. “Please look at me and my appearance,” she told the audience. In the wake of the radiation exposure of the Daigo Fukuryu Maru (The Lucky Dragon No. 5), a Japanese tuna fishing boat with 23 crew members on board, which was caused by a U.S. hydrogen bomb test in the previous year, there was rising concern over the dangers of nuclear weapons among the Japanese public. Memories of the war were still fresh in people's minds.

At the same time, the presence of A-bomb survivors and the need to provide them with relief measures came to be widely known through reporting by the media and arguments made by intellectuals, finally shining a spotlight on the issue.


Used as the title of a movie
That phrase, “It's good to be alive,” came to represent the state of mind and the new resolve of the A-bomb survivors, who had been turned aside as priority was given to reconstructing the city from the ruins of the atomic bombing. Awareness of the phrase was also fueled by the fact that it was used as the title for a documentary film by director Fumio Kamei, who shot the film in the two A-bombed cities in 1956 and backed public opinion that led to the enactment of the Atomic Bomb Medical Relief Law the following year.

Heiichi Fujii, who died in 1996, spearheaded the effort to establish the Hiroshima Prefectural Confederation of A-bomb Sufferers Organizations and served as the first secretary general of the Japan Confederation of A- and H-bomb Sufferers Organizations. In an interview carried in the February 1982 issue of “Shiryo Chosa Tsushin” (“Data and Research News”), a publication issued by the Research Institute for Nuclear Medicine and Biology at Hiroshima University, he spoke about the production of the documentary film and revealed: “It was Yoshiko Murato who uttered the phrase 'It's good to be alive' at the World Conference.”

Following the World Conference Against Atomic and Hydrogen Bombs, a plea was made to the Diet, the Japan Confederation of A- and H-bomb Sufferers Organizations was established, the Atomic Bomb Medical Relief Law was applied to A-bomb survivors, and A-bomb accounts were shared in Europe. In articles reporting on the A-bomb survivors' movement, from its inception to its spread, which appeared in a variety of newspapers, descriptions can be found of “Ms. Murato, a Hiroshima Maiden.” Before long, though, Hiroshima also became enamored with strong economic growth. When the city burgeoned to a population of 500,000 in 1965, Ms. Murato chose to leave the media spotlight.

When I located Ms. Takano on this occasion, she was concerned that ripples would be raised in her “ordinary, but peaceful days.” However, remarking, “I'm who I am today thanks to Mr. Fujii and them all,” she broke her silence of many years partly in order to console the souls of the A-bomb victims. Even with her own children, though, Ms. Takano has refrained from sharing her A-bomb experience in detail.